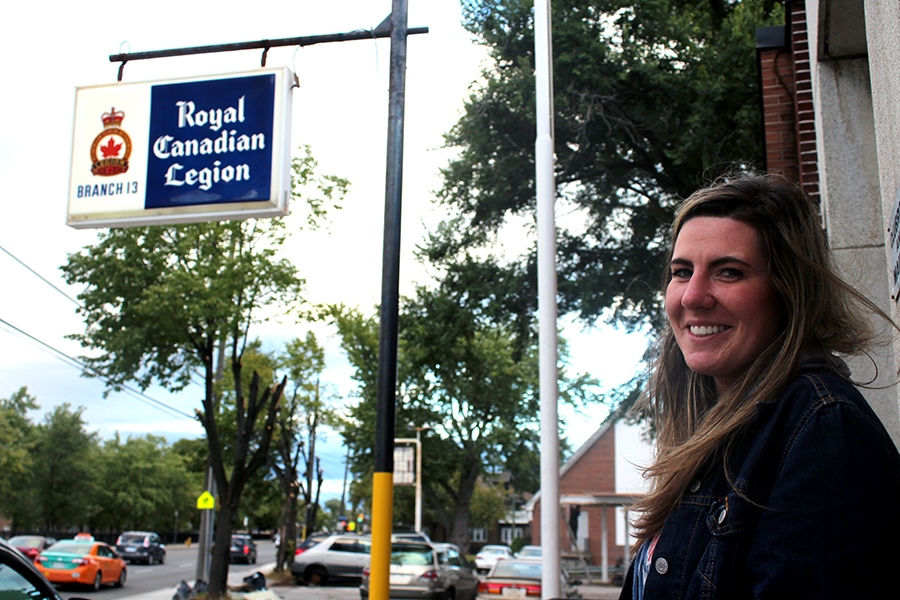 Jenn Van Dusen, 25, and her twin sister Sarah are the youngest members of the Birch Cliff legion. PHOTO: Josh Sherman

At 25 years of age, Jenn says they are the youngest members at the local legion, a squat brick clubhouse at 1577 Kingston Rd.

Like many legions across the country, organizers say the club is having trouble attracting younger members.

Local legionnaires want to change that, though, and hosting the Invictus Games flag tour on Sept. 19 was a step towards doing so, said branch 13 president Daniel Burri.

“We truly believe we try to bring the young vets to the legion, and it’s quite difficult to do that,” he said.

The flag tour is like the Olympic torch relay, but for the Invictus Games, a para-sport event founded by Prince Harry in which wounded, sick or injured military personnel and vets compete.

The inaugural games took place in 2014 in London, and this year’s flag tour was a precursor to the Toronto games, which ran from Sept. 23 to 30.

Some 150 flag bearers took the flag from coast to coast during the 37-day tour.

Alis Kennedy, a Metis veteran, had driven the flag from Borden, Ont., to the Birch Cliff legion. “For me, it’s a great honour,” said Kennedy, who was with the Canadian military from 1970 to 1983.

John White, a lifetime member of Branch 13 for 50 years, was the local flag bearer.

“I could not even think about a better classy man to carry the flag in today,” said Ken Bell, a representative for the flag tour, introducing White.

White said he was “astounded” to learn that he was going to be a flag bearer for the games. “I still can’t get over it that I was [selected], it really means a lot to me,” the 84-year-old said.

Events like the Invictus Games and its flag tour inspire the legion. Burri said the legion is going to continue to look at ways to attract younger membership.

Bob Murdoch, padre at the legion, said some suggest the problem is that common legion activities are “simply dated.”

Horseshoes, darts, euchre, cribbage and billiards in a bar is “not enough to attract younger veterans,” he said.

“In addition, some people feel that some of the branches look passe, they need remodeling,” he explained. “You go into them, they look tired,” he added.

The challenge of drawing younger members is not unique to the Birch Cliff legion. Nearly 80 per cent of legionnaires are 55 or older, according to the Royal Canadian Legion.

“What we’re doing at a national level is we’re slowly changing,” he said. “We’re much more social-media oriented. We’re online on a daily basis,” Irvine added.

He said 25 per cent of the local branches are online, and this year the Royal Canadian Legion launched its online portal for membership renewals and registrations.

For Jenn, family played a big part in her joining the legion. After the 2011 death of her uncle, Ron Taylor, a legion member of branch 617, she joined branch 13 the following year.

“(My uncle) thought it would be good for the whole family to join, socialize, be familiar with the suffering that vets go through and the help that they need,” she said.

Lately, she has been coming to the legion twice a week.

“I play darts and euchre,” she said. Part of the appeal is meeting people “from all sorts of backgrounds,” she said. She said friends she has made here are as old as in their 90s.

Van Dusen said the legion needs to raise more awareness, noting that prior to joining, she didn’t know non-veterans could join.

“Every time I say, like, ‘I’m a member of the Canadian Legion’… [people] don’t really understand,” she said. “I think more awareness needs to be done.”

Interesting statement from Tom Irvine. You should feel privileged that you even got to speak with him. They generally don’t respond to anything. The Legion branches are well intentioned and trying to meet their commitments and Dominion Command and Ontario Provincial Command need to do the same. Call him back and ask him about funding service dogs for veterans with post traumatic stress disorder. He may say everyone is waiting for the National Service Dog Standard and if you look into this you may see a Legion adrift in bureaucracy and infighting, Ask them what they do with the MILLIONS of dollars in public donations to their Poppy Funds. The local branches do a great job with very little resources and younger members better be prepared for disappointment.