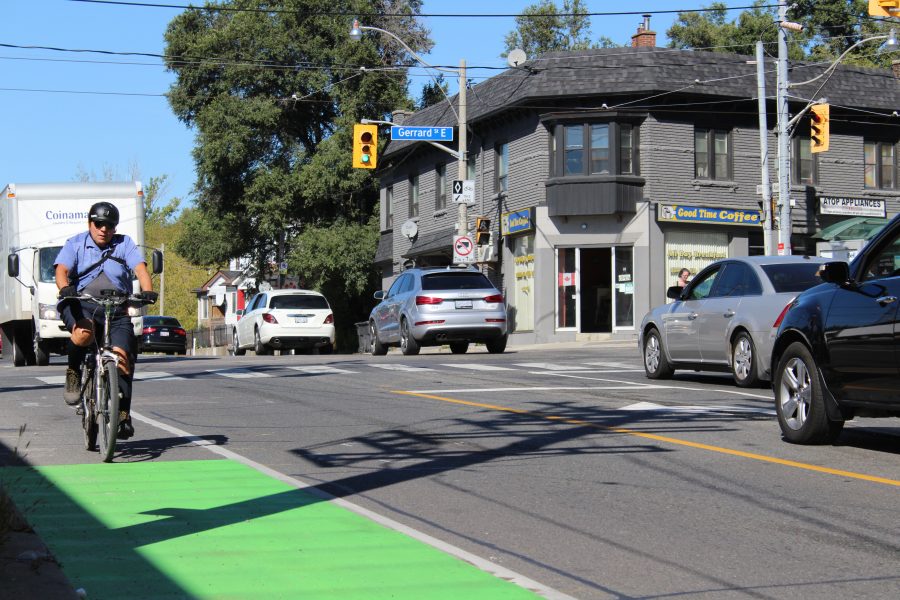 The city is putting the finishing touches on cycle tracks and bike lanes running on Woodbine Avenue from Queen Street East to O’Connor Drive this week. The infrastructure, expected to cost approximately $400,000 to install, is the latest step in a 10-year plan to expand the city’s cycling network and has sparked debate in the community.

There are a number of ways traffic flow on Woodbine could be improved while the bike lanes are maintained. Ward 32 councillor Mary-Margaret McMahon has made it clear she is not considering removing the bike lanes. But she said traffic signals are being synced. “We are adding extra time onto the green lights,” she added.

Turn restrictions could also be extended at some intersections, a city spokesperson said in a statement. Community and council approval would be needed. The city is adjusting park limits “to improve sight lines from side streets” and driveways and also plans to add more parking spaces. Turn lanes were added on Woodbine at Gerrard Street East and Kingston Road.

Justin Van Dette, a self-described activist and board member of the O’Connor Bermonsdey Business Association, has been organizing round-table talks for local residents to submit bike-lane concerns to be presented to local councillors.

Nearly 3,000 people have signed a petition calling for the lanes to be removed, while a counter petition has garnered around 2,000 signatures.

Van Dette said he had repeatedly heard complaints about how the bike line is configured.

“You’re not driving straight down Woodbine, the lane kind of switches over and moves based on where the on-street parking is,” he said. “We don’t want cars kind of going all over the place… the lanes should be straight.”

Another concern is seasonal. “We haven’t had a winter yet. There are concerns about how the snow clearing is going to happen,” he said.

“There’s always traffic-calming measures we can do,” said McMahon, addressing worries some residents have expressed about increased traffic on quiet side streets as motorists look for alternate routes to avoid Woodbine. The city said it is investigating adding speed humps on Milverton Boulevard from Coxwell to Monarch Park, on Wolverleigh Boulevard from Cowell to Woodmount, and on Sammon Avenue from Coxwell to Woodbine.

Residents can petition the city to examine adding traffic-calming infrastructure on their street, according to city policy. Signatures from 25 per cent “of affected households”—or 10 per cent for apartment buildings—are required to spur city consideration. The local councillor can also push for traffic-calming measures. Speed Humps were added on Duvernet Avenue from Woodbine to Golfview this year.

Who has the right of way?

Motorists are allowed to merge into a bike lane to make a right-hand turn only if the white-painted line marking the bike lane is dotted, or hashed, Toronto parking enforcement officer Kyle Ashley, known on Twitter as @TPS_ParkingPal, explained. In these cases, once a car has merged a cyclist should either wait behind, or safely pass the turning car on its left.

If the line is solid, motorists are not permitted in the lane, Ashley continued. “The car has to wait for all the straight-going traffic—the cyclists—to pass through the intersection before they make that turn.”

Understanding what the different white lines mean is a problem Ashley has observed with motorists and cyclists. “I think greater awareness is needed on that part,” Ashley added.

TTC service may be adjusted

The TTC has noted “recent issues with service reliability on the 92 Woodbine South route,” a spokesperson for Toronto’s transit authority said in an email. However, it is unclear what role bike lanes are playing. Construction at Queen Street East and Coxwell Avenue has been ongoing as the lanes are being completed.

“We can’t really make an assessment until that work is done and we can monitor the route in regular service,” the spokesperson noted. The TTC will use GPS data and consider reports from supervisors and operators in an effort to monitor service and make necessary changes.

No parking in the bike lane, unless…

Ashley, the parking enforcement officer, said there is a “zero-tolerance” policy against parking in bike lanes—with “very few exceptions.” These include licensed taxis—sorry Uber—and TTC vehicles, including the Wheel-Trans service, when they are making pick-ups and drop-offs in the painted lanes only.

This exemption is not granted for the city’s cycle tracks, such as the raised route along Sherbourne Street or the stretches of Woodbine where the bollards (those white posts) exist. However, Wheel-Trans vehicles can stop in traffic to pick up or drop off passengers.

Known in cycling circles as a “door prize”, the act of hitting a cyclist when opening a vehicle’s door can lead to serious injuries or worse. To avoid this, Ashley has a tip for motorists to remember as they exit their cars parked along a bike lane.

“I advocate for what they call the Dutch reach,” Ashley said. This method, Ashley explained, involves the driver using their right hand to open the car door. “It forces you to look over your shoulder.”

CycleTO, a cycling-advocacy group with chapters across the city, has lauded the lanes, but its executive director noted there was room for improvement. “There’s an issue that’s much broader than Woodbine and that effects all of our cycling network and that is really how we are approaching our intersections,” said Jared Kolb.

Kolb advocated for protected intersections, which make use of islands to create a buffer between cyclists and other traffic.

“The premise with that is increasing visibility of cyclists at intersections,” Kold, added. He said 40 per cent of collisions between motorists and cyclists occur at intersections. Vancouver, he noted, is starting to add this infrastructure to its network.

The protective intersection with traffic islands (think of the concrete which separates streetcars from car traffic on St Clair West) can be seen in some youtube videos by googling Dutch Intersection. The Dutch have been using them for four or five decades. Vancouver started using a version of this for about five years. It is typically used where one street crosses another and both have bike lanes. It takes the same space as our old style but is way safer.

From the May 7 2019 meeting on the bike hills**. The design of placing parking, in the midst of the automobiles and the bike hill, is meant to stop dooring. [ENSURES it according to Sean Dillon, Manager of Traffic Operation? ] Cars have doors on both sides. A passenger could very easily be unaware that they are near a bike lane despite assumptions that may have been made by the driver or cyclist.

Also the parking lanes are in such an awkward spot that they ensure parking 24/7. This does not allow for a much missed rush hour lane.

**One resident complained of the awkward parking configuration on the avenue, which places the parking lanes in the middle of drivers (on the left) and cyclists (on the right).

Sean Dillon, Manager of Traffic Operations at the city, said that this design ensures the safety of the cyclist and prevents “dooring”.