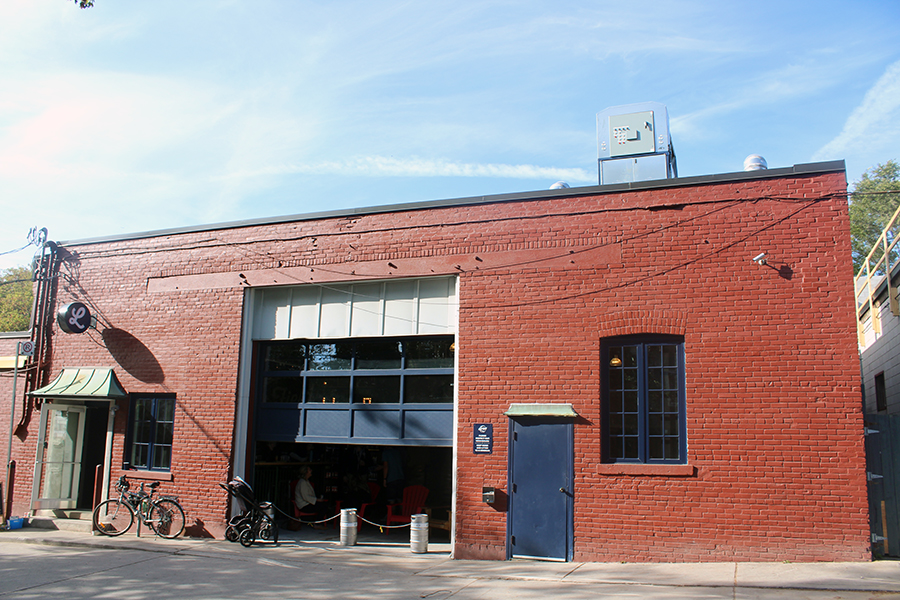 Craft breweries are spilling over into Toronto’s east end. Oversaturation to the west, a desire to work close to home, and demand for local craft beer are some of the reasons these craft brewers have chosen to set up shop east of Yonge Street in recent years. Here’s a look at some of the new breweries on the block.

Luc “Bim” Lafontaine puts a Japanese spin on the brewpub with Godspeed Brewery, which opened at 242 Coxwell Ave. this summer. The former brewmaster for the popular Montreal microbrasserie Dieu du Ciel!, Lafontaine is tapping into the years he spent living in the Land of the Rising Sun. “Usually Japanese food is kind of simple and balanced, and they really respect the ingredients—and actually that’s my philosophy. That’s exactly the way I see beer,” Lafontaine, who also launched a brewery in Japan, said. “We don’t want to try and put 20 ingredients in the recipe for nothing.”

Lofantaine brews off what his head chef, Ryusuke Yamanaka, cooks up—and vice versa. Godspeed’s seasonal menu mixes fusion cuisine and authentic Japanese fare. “We’re trying to do a little bit of both,” said Lafontaine. “We say we do Japanese home comfort food.” Katsu sando, a pork-cutlet sandwich, and karaage (fried) chicken are more traditional offerings, while a mushroom salad pushes those boundaries somewhat. “It’s made in a Japanese way with Japanese ingredients,” Lafontaine pointed out. On the taps, the Japanese influence shows through in Godspeed’s line of citrus beers.

The “easy go-to” beer at the approximately 7,000-square-foot brewpub is the Dortmunder, a German lager, said Lafontaine. “It’s kind of nice and crisp and refreshing and it goes very well with pretty much all the food that we make.” The acclaimed brewmaster expects to produce 40 to 50 different beers annually. For now, customers can buy 355-ml take-home cans on site, but there are plans to eventually bottle libations. Craft-beer fanatics had anticipated Godspeed’s opening for some time, so how has the response been about three months in? “I can pay my bills, that’s for sure,” Lafontaine laughed.

Tucked away on an incongruous industrial road off Greenwood Avenue, Left Field Brewery is easy to miss, but it’s very much on the radar of some of the biggest names in the craft-brewing industry. Left Field’s Eephus Oatmeal Brown Ale—you might have seen it on LCBO shelves—won gold at the Ontario Brewing Awards last year. Its Wrigley Oat Pale Ale earned gold in the Canadian Brewing Awards. Flip through the Ontario Craft Beer Guide by Jordan St. John and Robin LeBlanc, and you’ll find Left Field ranked third among hundreds of breweries scattered across the province.

“So yeah, there’s some accolades, but really what we care about most is not awards. It’s more about… building community, making great beer that we love to drink and that people love to drink, making sure that people drink fresh, and that they learn about how their beer is made,” said Mandie Murphy, who alongside her husband, Mark, owns the brewery at 36 Wagstaff Dr. Only light snacks are served at Left Field, open since May 2015, but patrons can effectively picnic inside or place delivery orders for food from elsewhere. An on-site bottle shop offers beer to go.

Taking advantage of its 6,000-square-foot space, the brewery hosts a variety of events for all ages. Depending on the day, you might see a youth-theatre performance, cross-stitching workshop, or home-brewing class taking place in the high-ceilinged industrial space. During MLB post-season action, Blue Jays fans are said to flock here. “I think and I hope that we’re known for our passionate love of baseball. In the past two years when the Jays had a post-season run it was a pretty great vibe here,” said Murphy. “We’ve really tried hard to build a community space that welcomes all people,” said Murphy as a group of about 30 behind her learned how to make wellness products with beer as an ingredient.

If you’re puzzled by what craft beer has to do with the Rorschach inkblot test, Mohan Pandit, co-owner of this eponymous brewery, has an explanation: “Craft beer is a very subjective experience. When you taste [it], you may pick up on passion fruit. Someone else will pick up on the banana or the mango.” Rorschach Brewing Company’s offerings are subject to interpretation, like blots of ink are, but Pandit says the brewery’s focus is on crafting complex-but-drinkable beers.

The Rorschach brewers have concocted 28 different beers and counting, including Preconscious, a dry-hopped apricot saison, and Divergent Thinking, an oat-wheat pale ale. These can be paired with staples such as tacos, fries, and skewers from Rorschach’s rotating menu, which will feature dishes from around the world. “We have a tapas style menu, with shareable plates,” said Pandit in a follow-up email.

Since its soft launch in March, Rorschach has already become an award winner. It took home a 2017 WVRST People’s Choice Award for its double IPA, Absolute Truth.

Mohan, who heads up this 6,000-square-foot brewery alongside co-owners Chris Ristevski and Matthew Reiner, said there are plans to open a ground-floor patio next spring, and that there is already a rooftop one seating 100. “You kind of have that feeling like you’re in a forest almost,” said Pandit, noting a row of trees running along one side of the brewery.

Live entertainment includes DJs, bands and events throughout the week. There is also a bottle shop, or, if you can’t make it out to Rorschach at all, the brewery at 1001 Eastern Ave. delivers, including to the Beach community.

Don’t forget Radical Road at Queen & Jones. A perfect place to hop off the 501 for a refreshment on the commute home.

Such an amazing, delicious variety of great and imaginative beers so close to home.

You also left out Saulter Street and Eastbound. If you’re going to bother writing the article, don’t be lazy about it.

Our coverage area does not include those breweries, but I am sure they are great. Here is our distribution map: http://www.beachmetro.com/bottom-middle-items/distribution-map/