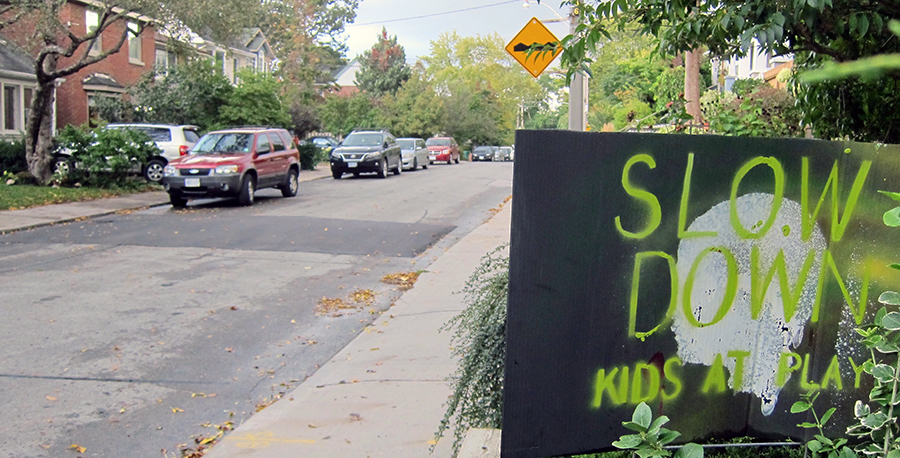 The humps are so new on Duvernet Ave., near Woodbine and Gerrard, that they still hadn’t received their painted arrows as of Sunday. The street drive for speed humps took roughly two years. PHOTO: Stephen Wickens

The timing was perfect: A big black pickup – complete with a rumbly mating-call-of-the-inadequate-man exhaust system – sped past, interrupting my discussion with neighbour Larry Kidd before it really started.

Kidd was out collecting signatures in support of speed humps on Hanson Street, south of Danforth at Coxwell, and I was eager for a progress report.

That means the petition should easily top the 80 per cent needed to get things rolling, according to Ward 32 Councillor Mary-Margaret McMahon’s office. But a decisive petition is just a start.

Hanson, which went through this process in 2004, should clear the next two hurdles: To qualify for an official poll, traffic must top 1,000 vehicles daily and at least 85 per cent of drivers must flout the old 40-km/h limit by 10 km/h. (Then-councillor Sandra Bussin told us in 2004 Hanson qualified easily.)

The big hurdle – then and now – is that “traffic calming polls” grant great power to the most apathetic souls. Not that non-voters care, but the city effectively deems those who can’t bother to cast ballots as hump opponents. And, as a bonus challenge for those seeking to make their streets safer, the “yes” side needs 60 per cent rather than a mere plurality.

The result, as city records show, is that while hump supporters outnumbered opponents in 91 per cent of 110 polls held between 2008 and 2013, residents were ruled to be “not in favour” 65 per cent of the time.

In 2013, on Barrington Avenue, north east of Main and Danforth, 91.5 per cent voted yes, but the city says residents were opposed because 59.8 per cent of ballots weren’t returned. Ward 31 Councillor Janet Davis was able to get humps for Barrington near Secord Public School, after all, and other councillors have done the same on occasion. (Bussin wouldn’t intercede for Hanson, which voted 85 per cent “yes” but fell shy of the mandated 50 per cent plus one ballot turnout.)

High turnout standards are a fine ideal, but this is a city where less than half of eligible voters have turned out for four of the six elections since amalgamation. Demanding a 60 per cent plurality on a public-safety issue is rich in a town where many councillors can’t get 40 per cent support (one won in 2014 with just 17).

And refusing to even consider a poll unless 85 per cent of people drive 50 km/h in the now 30-km/h zones makes one wonder if the city has consulted its lawyers.

Like them or not, humps are the most effective tool for slowing speeders on side streets (though the city is also putting stock in permanent electronic “speed feedback” signs in school zones and portable ones for other sites).

In a perfect world, everyone would automatically respect the streets and safety of fellow Torontonians, but two years of 30-km/h limits have changed nothing and those “please slow down” lawn signs have largely faded into the landscape. We might eventually have autonomous vehicles programmed to regulate speeds, but…

Humps cost money: the city says $3,890 each, including signage and polling expenses. But that’s way cheaper and far more practical than permanent police radar traps on every street. Humps, once installed, work 24/7/365 and don’t demand paycheques.

Not everybody likes humps, even beyond Ford Nation. Half the nine per cent of streets where hump opponents actually did prevail between 2008 and 2013 were on Beach Metro News turf.

A veteran paramedic recently told me that “you may feel disrespected by someone speeding on your street, driving an unnecessarily loud vehicle, it can be emotional … [but} nearly all pedestrians getting killed are on main roads, not residential streets seeking humps.”

He added, however (after I promised not to publish his name), that the usual argument about humps delaying emergency vehicles is “exaggerated.” He said “the risk from everyday speeding must be far greater than risks caused occasionally by somewhat slowed emergency vehicles.” He also emphasized that Toronto-style humps (as opposed to speed bumps) are so gentle that smart drivers with well-maintained vehicles can comfortably drive five or 10 km/h over the limit.

Speed enforcement on arterials may be more urgent, but it’s politically tricky. To get a sense of how many drivers feel, try sticking to the limit on the major roads. You’ll hear horns. You’ll see middle fingers.

For now, the city is reviewing speed-hump standards and processes in response to a motion by Councillor Davis.

“I started out as a councillor holding firm to the warrants and respecting the poll results,” Davis said, “but I found streets rarely met all the requirements. It seems so arbitrary, so I began using more discretion in requesting staff to bring forward reports that also contained alternate recommendations.”

Kidd, meanwhile, is ready to deliver the Hanson petition, hoping for humps soon on a street with a new wave of young families. And though our curbside chat lasted only a few minutes, two more vehicles blew past at lethal velocity before we were done.

This column is part of a recurring series tackling urban issues in the East End. Connect with Stephen Wickens on Twitter @StephenWickens1