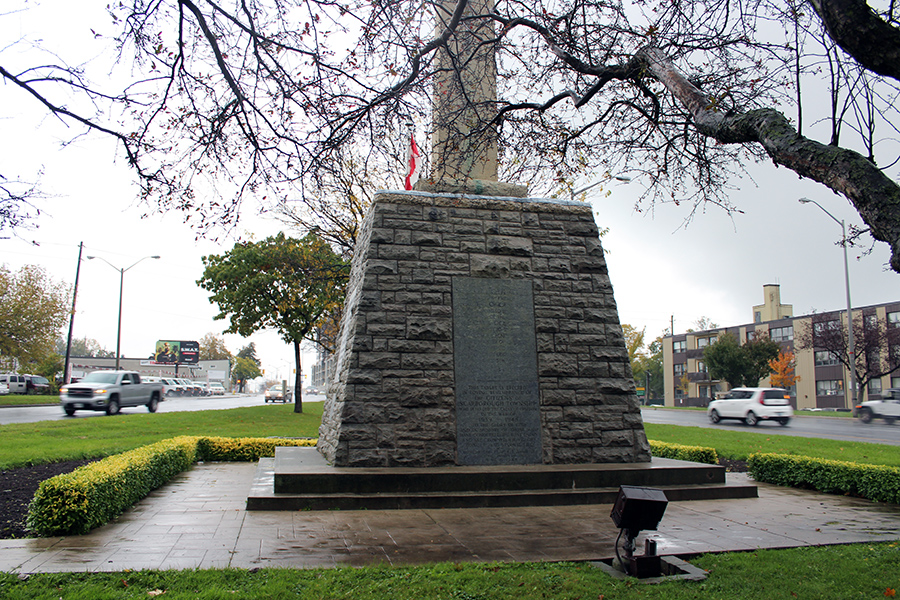 Where Kingston Road and Danforth Avenue threaten to collide just west of Cliffside Village there’s a beautiful cenotaph known as the Scarborough War Memorial. This soaring landmark sits in an undulating eye-shaped park some 300 metres long. It’s surrounded by mature hardwood and pine and flowering shrubs. The whole stretch is painstakingly maintained by a troop of city workers who pull the weeds, prune the trees, trim the grass and otherwise ensure a constant bloom of flowers through spring and fall. Neat park benches are strategically placed to take advantage of the sightlines and the intermittent sun that filters through the foliage.

If you’re lucky in November, you might just see a golden eagle glide above as the cenotaph reaches high into the edge of a raptor migration route. This hidden gem is the perfect spot for contemplation, to meet friends, family and neighbours and, especially, to honour those men and women who sacrificed everything to secure our peace. Or so you’d think. Because there is one tragic flaw with the Scarborough War Memorial – there’s no safe way to get to there.

The First World War. The numbers are staggering: 628,472 Canadians served in the armed forces, 424,589 went overseas, 61,356 were killed. Thousands more were permanently disabled by shrapnel and disease or disfigured and blinded by gas. Others, as we now know, suffered the constant torment of post-traumatic stress disorder. Young men – some very young – and many women, too. Over 2,500 nurses served overseas, and not all made it back home.

Canada was a much smaller country of 8 million people back then. Every family, every church, every neighbourhood would have been touched in some way by the war effort. The community now served by Beach Metro News was no exception.

Plans to erect a local memorial began when war memories were still raw; the cenotaph designed and the site – the intersection of Kingston Road and Danforth Avenue – selected. In the 1920s these roads met at an abrupt angle, so the intersection was rerouted to its current configuration with the southeastern-most separation of Kingston and Danforth forming the memorial setting.

Back then, the surrounding area was sparsely populated. Early 20th century maps show large swaths of land to the north and south owned by individual families and the Ontario Jockey Club. Farmland punctuated by homesteads and the occasional cottage lay in the distance to the east. Even later, aerial views from the 1940s show only partial development of the bluffs to the south and a rather sleepy portion of what would eventually become a bustling Cliffside Village. Car traffic was minimal in the 1930s while a good deal of travel was done on the electrified one-line radial train up from the city. All this made Kingston and Danforth the perfect location. There would be uninterrupted sightlines for miles around while the cenotaph itself would mark the last height of land before Kingston Road – the main thoroughfare into Toronto from the east – made its descent into Toronto.

On Aug. 30, 1931, before a crowd of 3,000, officials and dignitaries unveiled the Scarborough War Memorial. The inscription reads in part: Their Names Are Hallowed / In The Land They /Loved. Above this is a large bronze sword with a Scottish thistle forming the hilt.

University of Toronto Geologist Nick Eyles told me that the limestone that makes up the body of the memorial is typical of the 400-million-year-old Palaeozoic rock that rests below large areas of southern Ontario. The inset inscription panels, he explained, are probably 1-billion-year-old old igneous rock typical of Canadian Shield rocks to the north. All told, the memorial is a “fitting reflection of the geological foundations of southern Ontario and the land these soldiers never returned to,” said Eyles.

After the First World War, peace was fleeting, of course. The memorial now stands for all those who made the ultimate sacrifice in both World Wars, Korea and in Peacekeeping efforts.

Author and military historian Rick Pyves has been touched by war. His grandfather fought in the First Word War and his uncle was killed in action in the Second World War. His father, Ron Pyves, was a WWII tail-gunner who flew 35 harrowing missions over war-torn Europe. He suffered PTSD and died prematurely as a result.

Pyves said that “the community war memorial like the one in Scarborough provides families with some closure in that it both recognizes the fallen soldiers locally and provides the family with a place of reflection.” War memorials, he said, “also provide a poignant reminder to our youth of the ultimate cost of a free and democratic nation.”

Every year on Nov. 11 police block off traffic so young and old alike can cross Kingston Road, safely, to attend Remembrance Day services. I visited the Royal Canadian Legion Scarborough Branch 13 on Kingston Road to get a sense of what the memorial stands for today. RCAF veteran John White, 84, told me that the memorial is “a unique landmark, a local tribute for all veterans” that serves as a “focal point of the village.” With fewer veterans each year, Branch 13 is “relying on the sons, daughters, nephews and nieces to carry the Legion flame,” he said. This also means supporting the annual Nov. 11 service at the cenotaph. When asked if he will attend this year, the veteran said, “Every year! God willing.”

Times have changed since the Scarborough War Memorial was unveiled in 1931. While the memorial is accessible during Remembrance Day ceremonies, that isn’t the case every day. There are two to three lanes of high volume traffic on each side. The posted speed limit is 60 kilometres per hour. Crossing it to get there is dangerous, and could be deadly considering that in 2016, 72 per cent of all pedestrian fatalities in Toronto occurred in Southwest Scarborough. If this weren’t deterrent enough, 41 Police Division says that to do so is jaywalking, and subject to a stiff fine. Furthermore, there are no other safe or dedicated access points, anywhere. There is no crosswalk, but a sidewalk that ends at a busy road. Shouldn’t there be a safe way to access the memorial for those looking to quietly reflect on days outside of Remembrance Day?

Years ago, the Scarborough War Memorial could be seen from miles around. Today it sits shrouded in the middle of heavy traffic in a highly urbanized neighborhood. It is generally forgotten, out of sight, inaccessible. Nevertheless, something beautiful has happened to this splendid memorial over the years. While it once sat on a treeless patch amongst farm and field, the memorial now rests in a green, tree-filled oasis in the middle of a lively GTA, with people passing by daily. The memorial is just as important now as it was 86 years ago. It’s just a matter of getting there.

Richard Dionne is a book publisher and newcomer to the Beach Metro community.

Why would it be so difficult to put in a pedestrian-activated crosswalk?

At one time in the late 2000’s there was talk of moving the cenotaph to the lands just to the north. Whether moving the cenotaph or not, there is a great opportunity to create a safe and accessible 365 day/year destination for pause and reflection. Hoping the conversation continues well after Remembrance Day this year.

I feel like it is disrespectful to move the monument…If anything we should accommodate the surroundings to make the cenotaph more accessible. A crosswalk seems obvious but would be dangerous given the speed and frequency of traffic on Kingston rd. My preferred option would be to build a pedestrian walkway over Kingston rd to provide safe access.

I have never had to fight for freedom. Someone else did the fighting, the dying, and the sacrificing.

I was born into freedom. I was always reminded that accompanying a person’s rights and freedoms is the responsibility and the obligation to defend it.

Part of protecting freedom is to remember its high cost and those who put it there, and to remember those, who to this day, defend freedom here and abroad and fight for it on behalf of those who are unable to fight for themselves.

On November 11, we remember those men and women of the ages who wore the cloth of this great nation and who sacrificed themselves, for us, on the alter of freedom. We remember those individuals who ‘made do’ with less, and ‘went without’ in order to support the war effort, and those who struggled, labouriously, working exhausting hours in industries that fed goods and services to the military. On November 11, we remember them too and we remember those who served post Korean War. Canada has served all over the world. Please remember those who have and are serving in: the Congo, West New Guinea, Middle East, Israel, Syria, Lebanon, Sinai, Egypt , Namibia, Western Sahara, Cambodia, Somalia, Haiti, Rwanda, Bosnia, Herzegovina, Central African Republic, Sudan, Darfur, East Timor, Kosovo, Cyprus, Ukraine, Honduras, Jamaica, El Salvador, Guatemala, Ethiopia, Eritrea, Mozambique, Uganda, Liberia, Mali, Sierra Leone, Yugoslavia,, Macedonia, Turkey, Cambodia, Afghanistan, Persian Gulf and the…

…Arabian Sea, Golan Heights, Pakistan, Iran, Iraq, Viet Nam, Dominican Republic, Turks and Caicos, and this list is not complete and unfortunately neither is war.