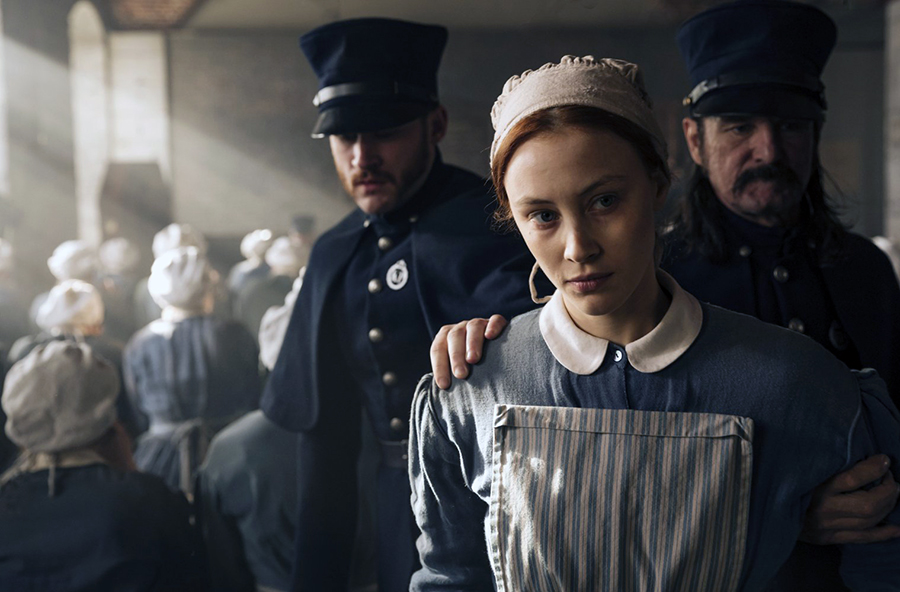 “There has been a crime, people want a guilty person, rightly or wrongly does not matter,” says Grace Marks, played by Sarah Gadon in Sarah Polley’s ‘Alias Grace’. PHOTO: Netflix

I confess. I’m hooked on true crime mysteries like Making a Murderer, The Jinx, The Menendez Murders, The People v. O.J. Simpson (spoiler alert… he did it) and now Alias Grace, the CBC/Netflix mini-series adaptation of Margaret Atwood’s 1996 historical fiction novel.

This has been Atwood’s year. The Handmaid’s Tale won eight Emmys, including Outstanding Drama Series. In late October crews were once again at St. Aidan’s Church on Queen Street East and Silver Birch filming a second season (under the absurd alias “Rocket Woman”).

While The Handmaid’s Tale looks to a dystopian, future society where women have lost all their rights, Alias Grace takes us back to patriarchal, Victorian times when females had few rights, especially if they were a poor, immigrant girl.

The real Grace Marks emigrated from Ireland to Toronto in 1840 when she was 12 or 13. Her mother died on the sea voyage and her abusive father sent Grace out to toil as a housemaid. In the summer of 1843, just before she turned 16, Grace went to work at Thomas Kinnear’s farm on Yonge Street near Richmond Hill. Within a few weeks, Kinnear and his housekeeper Nancy Montgomery were dead and Grace and farmhand James McDermott would be on trial for murder.

“Murderess is a strong word to have attached to you.” ­– Grace Marks, played by Sarah Gadon

Watch for award nominations for writer/producer Sarah Polley, director Mary Harron and, as the enigmatic Grace, the brilliant Sarah Gadon. The Toronto actress may well be up for a Golden Globe on Jan. 7.

Alias Grace was filmed at Kingston Penitentiary, as well as on sets at Revival 629 (formerly Toronto Film Studios). The Eastern Avenue location has been home to over 200 feature films, including Good Will Hunting (1997).

The series pays close attention to period details. Gadon spent a week of “pioneer re-enactment camp” at Black Creek Pioneer Village learning “how to do things properly” with all the skills needed as a domestic servant in colonial Upper Canada, including milking a cow and sewing a quilt. A number of Village buildings were used in filming. Atwood herself plays a disapproving woman at the Fisherville Church (1856).

Some key scenes were filmed at the historic Half Way House Inn which was moved to Pioneer Village in 1966 after more than a century at Kingston Road and Midland Avenue. Mr. Kinnear (Paul Gross) visits the “Richmond Hill Arms”. In a later scene where Grace and James are fleeing to Toronto, the sign is changed and the Half Way House portrays the “York Lion Hotel” (actually City Hotel near St. Lawrence Market).

The Half Way House was built in 1847/1848 by Alexander Thompson and his wife Mary (nee McClure) who was the great-granddaughter of Sarah Ashbridge, who was one of the original settlers east of the Don River in 1794. The land in Scarborough on which the inn stood was part of a Crown grant to the Ashbridge family in 1799. The heritage Jesse Ashbridge House (1854) still stands on Queen Street East.

Within two days of the July 29, 1843 murders, Grace Marks (alias Mary Whitney) and James McDermott were caught after taking a steamboat from Toronto to Lewiston, New York. Both were wearing the clothes of their victims. They should have heeded the name of the wooden, side-wheeled ship… aptly called Chief Justice.

Justice was swift. On Nov. 3 a Toronto jury took only 10 minutes to convict the 20-year-old McDermott. He protested that the murders were Grace’s idea, but he was soon hanged at the jail on Berkeley Street. Grace’s jury recommended mercy.

Her sentence was commuted to life imprisonment and she was pardoned in 1872 after 29 years in prison.

Whatever became of Grace Marks? No one knows. The warden at Kingston Penitentiary “obtained for her an excellent position in a wealthy family resident in the United States who were made acquainted with all the particulars of her story,” according to the Globe & Mail, Aug. 5, 1872.

Atwood wanted the question of Grace’s guilt or innocence to be left ambiguous. Her fate was always in the hands of men. At the end of her book the author wrote, “The true character of the historical Grace Marks remains an enigma.”

On leaving prison, the real Grace Marks was required to answer the question, “To what do you attribute your incarceration in this institution?” Grace replied, “Having been employed in the same household as a villain.”

Most mystery buffs want answers. The young housemaid was the only one left alive to tell the tale, but Grace took the truth with her to her grave, wherever that may be.