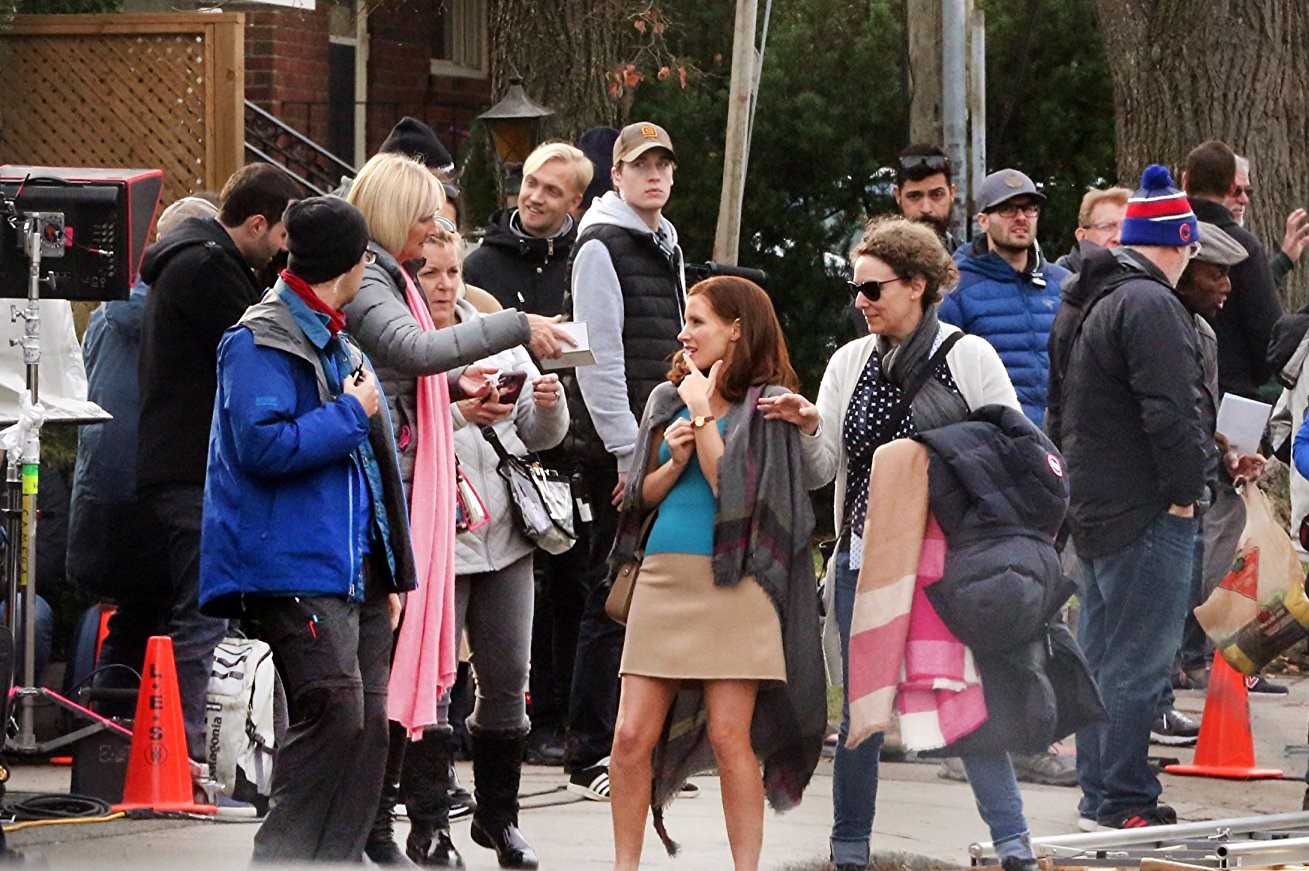 “So you want to be a director?”

These words were magic to the ears of aspiring filmmaker Angie Lawrence, especially coming from Aaron Sorkin, the Oscar-winning writer/producer famous for The West Wing, The Social Network and A Few Good Men. Sorkin and crew were on location in November 2016 at the Lawrence home on Pine Ave. filming two scenes for his feature-length directorial debut, Molly’s Game.

Angie remembers, “I nodded enthusiastically. As a fan of his work, I was thrilled just to be having a conversation with him, and even more excited when he told me I could call ‘Action!’ and ‘Cut!’ on the last two shots of the day. Aaron was very kind and friendly.”

The director even invited Angie to sit in the director’s chair.

“I watched the shots attentively on the monitor, and yelled “Action!” at the top of my lungs,” the teen recalled. “After they wrapped for the day, I had the pleasure of meeting the director of photography and even Jessica Chastain herself.”

Angie’s dad, Burke Lawrence, is an actor himself and says it’s unusual for a director to let a teen share such an opportunity: “This never happens.” Sorkin said, “Here is what we’re gonna do.” Burke recalls “a wonderful experience. It’s not every day Hollywood comes a-knocking in the neighbourhood. Serendipity. It was quite magical.”

Angie was invited to see the final takes on the last day of shooting at their home. She was in the backyard and Chastain (photo, above) was at the front getting ready for a scene. Burke asked Sorkin if he wanted to meet his daughter.

Angie, 16, is in Grade 11 at Rosedale Heights School of the Arts after attending Williamson Rd. P.S. and Glen Ames. Her proud papa says Angie won a Principal’s Award for leadership. She was “very excited” to be part of Molly’s Game. The experience has sparked her desire to be a director for real and she hopes to go to Ryerson University.

The cast and crew were “very welcoming,” she said. “What I found the most interesting was that Aaron and Jessica didn’t speak down to me as a fan, but instead recognized my interest in film. They spoke to me like a genuine friend and were happy to show me the ropes. As a budding filmmaker and admirer of the art, I am very grateful for this experience and will always be happy to retell the story.”

Burke says that Chastain was enjoying the moment and “had no airs about her.” Sorkin was missing his own daughter, Roxy, who is about the same age as Angie and who also has aspirations to follow in her dad’s footsteps. The four-time Emmy winner was inspired by his daughter to tell this true story about an empowered woman in a patriarchal world.

Chastain is brilliant as Molly Bloom, a world-class skier turned “poker princess” in a dangerous underworld of high rollers, mobsters and celebrities. The fiercely independent Molly has a strained relationship with her father, played by Kevin Costner.

After a ski injury (with filming at Beaver Valley Ski Club) a broken and broke Molly moves to Los Angeles. When two scenes called for an older, funky, California-style cottage, a location scout found the Lawrence home. Burke says the filmmakers needed a bit of a “run-down look to the place” at the front. For less than a minute of screen time the production spent a week at their house making it look just right.

David Wasco, the production designer, had just finished his colourful, Oscar-worthy work on La La Land. He gave the cottage an earthy, Spanish-adobe style. Burke quips that their “porch looked like Jurassic Park.”

At the Molly’s Game world premiere at TIFF last year, Chastain said she was happy to be “back in Toronto where I belong…I’ve made like six movies here.”

Aaron Sorkin also had high praise. “I have to say it was the best crew I’ve ever been part of, without a doubt. They are phenomenally talented,” he told the Ontario Media Development Corporation.

Will Hollywood Change in 2018?

Chastain has become an outspoken advocate for diversity, women’s rights including pay equity, and progressive political action. Will we see more female stories and directors in the future?

Angie Lawrence won’t get a “directing” credit for Molly’s Game, but says “working with Aaron and his team was such an honour.” She will be “looking to Molly’s Game in the upcoming Academy Awards.”

Jessica Chastain and Aaron Sorkin were both nominated for Golden Globe Awards on Sunday. You can bet on these two bright lights winning more golden statues in the future. Maybe we’ll even see Angie up there on stage one day. “And the Academy Award for Best Direction goes to…” She’ll have a story to tell!