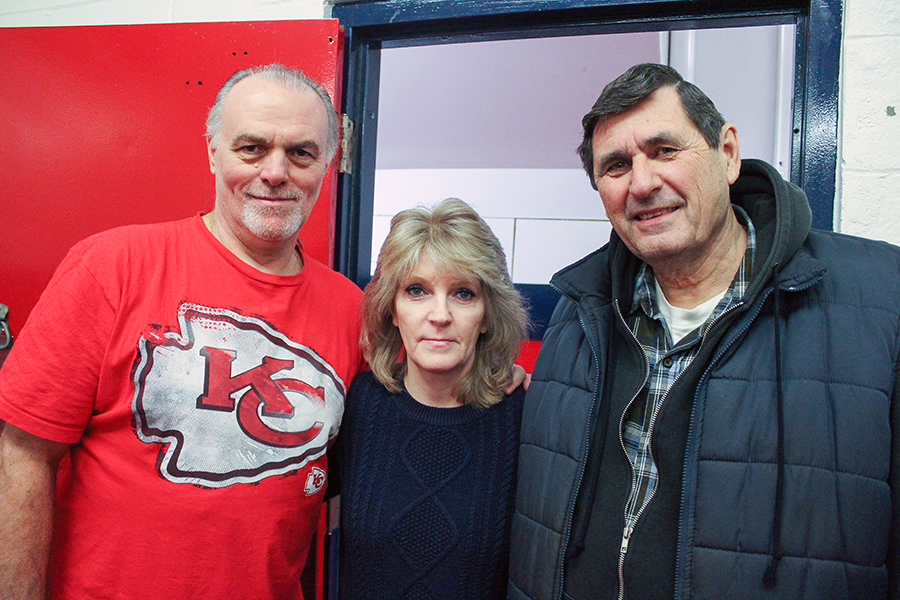 Volunteering is a way of life for Colin Berwick, left, and his wife, Terry. Colin has been volunteering a Ted Reeve Arena for over 46 years, many of those alongside current TRHA president Steve King, right. PHOTO: Anna Killen

“Who will do it if I quit?” asked the woman next to me on the subway.

“Listen! Nineteen years! You’ve more than done your part!” replied the man, probably her husband and clearly a voice of reason.

I said nothing, not wanting them to know I was listening, though I felt like telling the woman that those with the least reason to feel guilt are all too often the people most likely to be consumed by it.

She’d been a Brownies and Girl Guides leader for nearly two decades, likely having stayed in after her daughters moved on. She wanted to pass the torch but feared nobody would be there to take it – and her dilemma resonated with me.

I’ve felt twinges of guilt in my first winter away from the Ted Reeve Hockey Association after just five seasons running its bantam house league. Actually, it’s now more than mere twinges since hearing my replacement is running three age divisions single-handedly. (When I played at TRHA in the 1960s and ‘70s, each age group had two managers.)

An abundance of volunteers is among the best indicators of great community, and while we have many people giving plenty to lots of organizations across the East End, we need more.

“It really is getting harder to find people these days,” says Steve King, who has given much of his alleged spare time to Ted Reeve for 42 years – the past 14 as TRHA president. “Even for positions that require just two hours a week, house-league coaches, we’re short,” says King, a man who shuns recognition and is quick to point out he is not Ted Reeve’s longest-tenured rink-rat. That distinction belongs to Colin Berwick, 46 seasons and counting.

King concedes there are hassles in having to clear a police check or take coaching courses, and he says governing bodies higher up the chain are putting too much strain on hockey volunteers. He also fears many local volunteer-based institutions – not just in sports – are endangered if we keep relying too much on too few people.

“Just a few extra people could make it so much easier for everyone.”

“We’ll burn out the ones we have. Just a few extra people could make it so much easier for everyone,” King says, adding “there are also really rewarding moments.”

I took the bantam-league gig because, apparently, nobody else wanted to deal with 13- and 14-year-olds and their parents. I’d planned to do a year or two but stayed longer because of great fellow volunteers and some happy surprises.

One was realizing that nearly everything you’ve read about hockey parents is untrue or badly exaggerated. Cases that make the news are lottery-win rare, and while I used to chalk up my good fortune to the fact I ran a low-key, all-for-fun house league, King says he had “no problem parents” during his 12 seasons coaching competitive Ted Reeve entries in the Greater Toronto Hockey League.

My duties, which took up four or five hours weekly, awakened a previously unimagined sense of connection with volunteers who made activities of my youth happen.

One afternoon at the Ted Reeve snack bar, I ran into George McConnachie, who long ago was one of my coaches at the Balmy Beach Canoe Club (he also coxed a crew that included two of my brothers to a national championship, 50 years ago this coming summer).

George was at the rink to watch his grandson’s game, and it felt great to be able to personally thank him for being a mentor as well as great coach. But it also reminded me that too often in life we don’t think to thank people well enough – if at all – till after they’re gone. The late Russ Dunn and Ray Knight are two names that come to mind. They may be unfamiliar to you, but the years they put in at Balmy Beach make them true community builders in my eyes. And they’re just two of many.

For those of us who played lots of sports and attended Cubs and Scouts, or Brownies and Guides, there are scores of selfless souls to thank.

Eventually, afternoons at the rink taught me that we can still honour their efforts simply by paying it forward, even if they’re not around to acknowledge it – and I’m pretty sure it’s all worthwhile even if current kids don’t think to thank us till after we’re gone.

There are many forms of volunteering

Amid the current Arctic chill, some of your finest neighbours have been keeping people alive through the Out of the Cold program at St. Aidan’s Church. Big Brothers and Big Sisters always needs help. Community Centre 55 does great work. And it’s the efforts of volunteers that made the Danforth East Community Association’s 10th anniversary last year so worthy of celebration.

Volunteering needn’t be formal. It can be as simple as paying attention to the needs of a senior on your block, or helping an immigrant family feel at home in a strange country. It all counts, even if nobody’s keeping score.

You might be too busy to lend a hand in 2018; fine. You might need a rest after years of volunteering; I get it. But keep in mind the Greek proverb (adjusted slightly for a local paper in an era when lots of boomers are retiring): Communities grow great when old men and women plant trees whose shade they know they shall never sit in.

Stephen Wickens is a life-long East End resident and a semi-retired journalist. Connect with him on Twitter @StephenWickens1.

Keep up the great work, you guys rock. Wish i was still around but life takes us on many journeys.

Great story on some great volunteers!