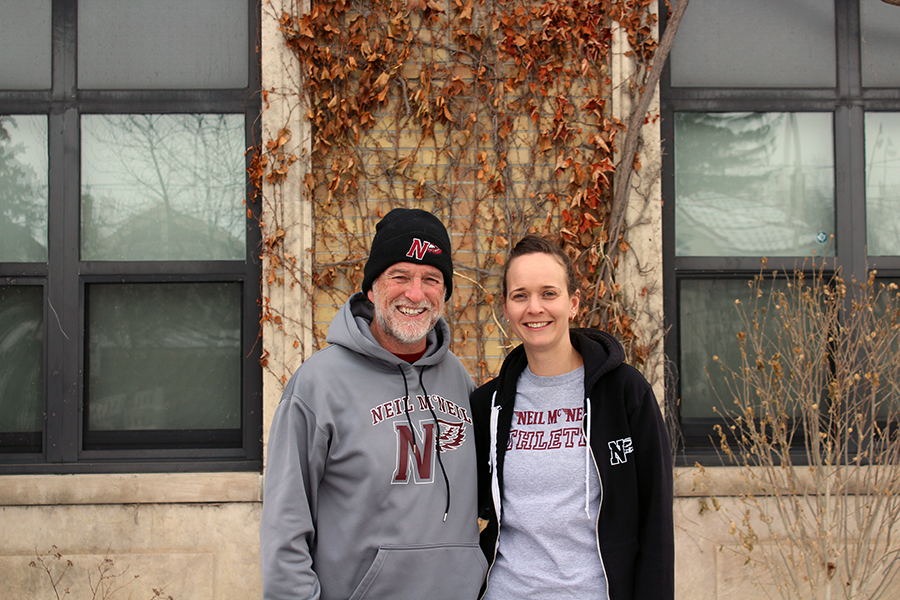 Steve Masterson and his daughter Ashley have been coaching Neil McNeil Catholic High School's cross country and track teams together for a decade. PHOTO: Josh Sherman

Father-daughter coaching duo Steve and Ashley Masterson’s mutual passion for track and field and cross country is long running – it even predates the latter’s first steps.

“Since before I could walk I think I’ve been dragged around to track and cross country meets,” Ashley said. She remembers as a child helping post scores in the days before the sport, which she considers herself “born into,” went digital.

In her high school years, Ashley was athletic – volleyball, soccer, track and field and cross country were her sports – but she said she never accomplished “anything amazing.”

“Part of the streak that I’m actually even more proud of is that in that 10-year period all three teams qualified to OFSAA,” Steve said. “So we’ve had 30 teams, like, divisional teams, qualify for an OFSAA which is… a pretty neat trick.”

Accomplishments aplenty, there is still no trophy room inside Steve’s Scarborough Road home. Instead, the coaches put the spotlight on students who have persevered, such as Neil McNeil alumnus Andrew Alexander, who graduated last year.

“Now he’s on a scholarship at Notre Dame – that’s pretty big,” said Ashley. “All the kids progress, but I would say in the course of my time [Andrew] has been the most successful.”

Like their students, Steve and Ashley have developed throughout their time working together as well. Despite Steve leading his progeny by about 30 years of experience, he said he has learned from Ashley.

Ashley, too, has learned her share of lessons. “I think what I’ve learned from him is just how important it is to give back,” she said. “A lot of people who end up coaching and becoming teachers are people who’ve had great experiences when they were kids.”

What interests the coaches in running is yet another thing they share in common.

“If you’ve done well you know you did well, and if you didn’t do well, you can’t blame it on anybody else… whereas a football team, you can kind of hide and say, ‘Well, it just wasn’t me,’” Steve said. Seated beside him in his living room Ashley added, “I like that individual aspect, too.”

I’ve known and coached against Steve for about 30 years. I’ve seen Ashley literally grow up around the sport. Glad to see that they are getting the recognition that they deserve. Classy pair and a Classy program!!
Mr. Cham