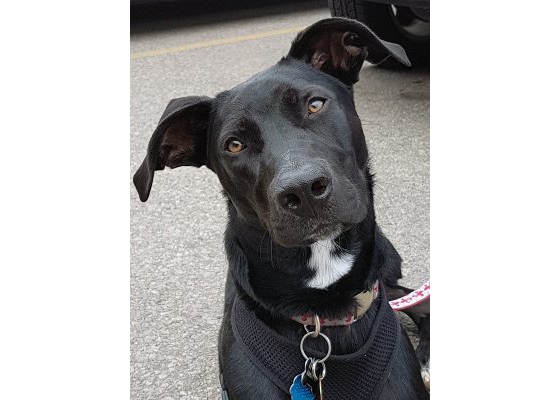 According to the Chinese Zodiac, we’re entering the Year of the Dog. This suits our first featured pet of 2018 perfectly.

Everything is new and exciting for the one-year-old Labrador retriever mix, including his latest mode of transportation. He may have arrived in Canada quite conventionally, thanks to a team of rescue transport drivers, but he’s got a new ride now. For the first time in Pet of the Month history, I’m featuring a dog with a flying carpet!

But we’ll get to that a bit later.

I found out about this magical dog by sheer happenstance when attending Jersey the Beagle’s 15th Birthday Party back in December. Jersey and her mom decided to celebrate the occasion by inviting all of their friends to Dogtopia in Burlington for the afternoon. Together, we honoured Jersey and raised funds for Big On Beagles. Lucky for me, Jersey has a lot of interesting friends, including a patchwork quilt of a rescue dog family made up of some truly sublime senior Labrador retrievers and one feisty 12-year-old Border Terrier. In fact, a couple of them scored spot prizes! Seventeen-year-old Chloe won for Sweetest Senior and Grizzelda the feisty Terrier nailed it with Cutest Scruffy Face. The well-deserved awards led to a conversation with their proud mom, Pam, who happens to be board Advisor for the Ontario division of New Orleans Lab Rescue (NOLA).

NOLA started in 2010 with the arrival of Courage, a Black Lab sporting a noticeably skewed jaw who was having no luck finding an adopter in his hometown of New Orleans. The slack-jaw may have been a factor, but Pam also attributed it to “Black Dog Syndrome.” It’s a fact that black dogs don’t photograph well and people often fear what they can’t make out. But Courage was a great dog and that wasn’t lost on Pam or the Ontario family who ultimately adopted him.

The beginning of a beautiful partnership, Courage has paved the way for many hard-to-place senior and special needs Labs hailing from this New Orleans rescue group dedicated to saving dogs that need them the most. In the last seven years, the Ontario branch for NOLA has grown to include an inspirational array of foster families spanning from Oshawa to Guelph. They may not be as big as their counterpart in the Big Easy, but they’ve got heart and I’m honoured to spread the word in the hopes of sending more Lab lovers their way.

In that first conversation with Pam, she told me with tears in her eyes that Courage – the dog who started it all – had only recently passed away due to cancer. While he may be gone, I can’t help but believe his spirit is alive and well in the dog whose harrowing story I’m about to share with you.

The abandoned pup was taken in by NOLA back in May. He would eventually come to Canada in October.

It’s a survival story never to be forgotten.

First rescued from the woods in rural Louisiana, the pup was rushed to a local animal shelter where a call for help was placed to NOLA and he was taken to a veterinary hospital for emergency medical intervention.

His rescuers named him Tres, which is Spanish for three. The name was fitting considering the outcome of that terrible day in the woods.

Tres had been found with one hind leg caught in a bear trap. Despite his rescuer’s efforts, the trap would not release what remained of his badly torn leg. His rescuer knew the roughly 4-month-old pup would bleed to death if he didn’t get him help as soon as possible. He felt he had little choice but to sever the limb with the only tool he had in his possession – a pocket knife. Later that day, Tres would undergo a proper amputation in hospital while being treated for severe infection caused by the initial crude procedure.

But that wasn’t the only medical intervention Tres would need. It was sadly evident that Tres’ remaining hind leg was unstable. If he was going to manage on three legs, he would need surgery for hip dysplasia followed by extensive rehab before NOLA could even think about searching for an adopter.

After a lengthy recovery, Tres was ready to find his forever home but when NOLA was unsuccessful in finding Tres a home in New Orleans, they arranged for him to be transported to their partners in Ontario. Pam had taken in “tripods” before with great success finding loving homes. But Tres was a special case. She knew he would need the best possible foster placement to further his physiotherapy while surrounded by the love and support of an entire team of caring humans and fellow Labs. She found that in Mary-beth Ribble and Al Wright who own K9 Fun Zone in Caledonia, Ontario.

One could never blame Tres if he withdrew from the world after all he’d been through. That would be completely understandable.But our courageous, bright-eyed survivor hasn’t withdrawn from the world, he’s embraced it. Every day is New Year’s Day for Tres.

There have been so many fabulous firsts for Tres since making Canada his new home. There was his first swim. During this unseasonably warm fall, Tres had the good fortune to test out the pool at his new foster home a few times before the weather turned. This physio helped to strengthen his muscles post-op. And then there was his introduction to snow! Bundled up in a lovely new custom coat, Tres has been getting to know this new friend called snow ever since it arrived. But his favourite new friends have to be his foster parents’ six Labs. He loves to wrestle with them, play tug-the-toy, and talk Lab. Tres is a real talker. His tongue wags as much as his tail (that’s pretty much all the time), so even though his foster parents aren’t exactly sure what he’s saying, it’s clearly happy talk.

Tres may never be the strongest swimmer or the best hiker. He’ll never run marathons and he still hasn’t quite grasped the concept of retrieving. But what he lacks in stamina and basic namesake skills, he more than makes up for in enthusiasm.

It’s because of that eternal enthusiasm for absolutely everything and everyone, Tres discovered his ability to fly! He was happily stretching out on a dog bed when his Lab mates gave one corner a little tug to engage him in a wrestling match. But Tres held out for another tug instead. Before he knew it, he was being pulled clear across the room, up to the stars and back again! Flying by the seat of his tail has naturally become his favourite thing, a new adventure every time.

You just never know what you will find, so why don’t you come along with Tres… on a magic carpet ride!

Tres is a one-year-old, three-legged, laughing Labrador retriever mix mastering the art of carpet flying in his Caledonia foster home, courtesy of New Orleans Lab Rescue, www.nolalabrescue.org. If you want to Lab it up on a magic carpet ride with Tres, give his caregivers a holler: adopt@nolalabrescue.org.