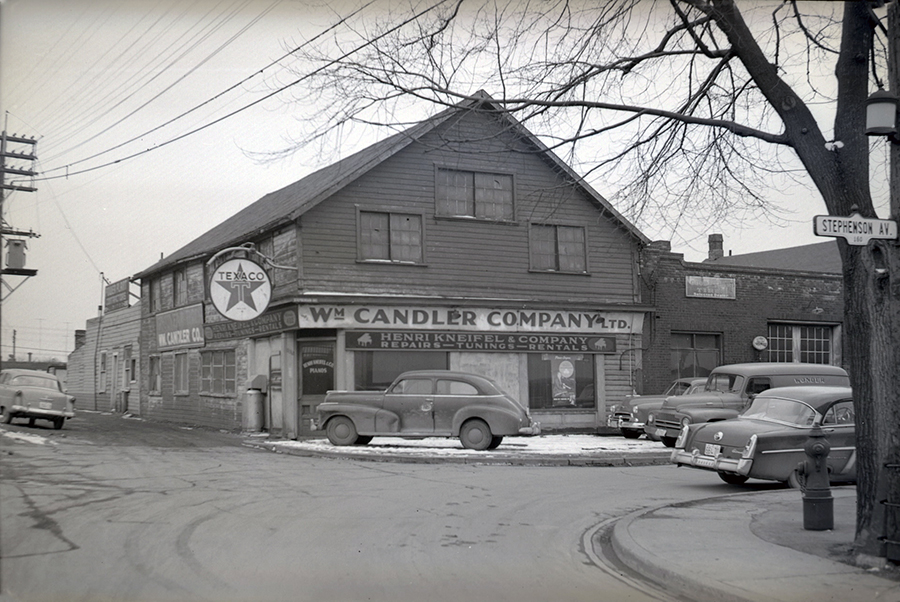 There was a well-attended meeting at Hope United Church on Jan. 10, which discussed the development of the southwest corner of Danforth Avenue and Main Street.

The city planners and representatives of the developers gave a good account of what their aims are from both sides.

One thing I noticed, however, was that more could have been said about the historical aspects of this particular place, mainly Main and Danforth. And I can tell you – history abounds here.

A number of people in our neighbourhood know this and are happy to share their knowledge. We have people like Barbara Myrvold who has written many books on the different parts of Toronto. One good one is The Danforth, which gives you a good history of the area. Another person is Stephen Wickens, an advocate for retaining history on the Danforth and adjacent areas. But still, I myself am perplexed as to why not many know about the rich history of this spot. I was approached by several people at the meeting after I spoke about some of the historical aspects of the area – and then decided to write about some of them.

The main reason why this area in the east end was settled was because of one major factor – the Grand Trunk Railroad, later the Canadian National Railroad.

In the beginning of the 19th century, the railroad was supreme. Its construction is responsible for opening Canada. In our area, the GTR, (opened from Toronto east to Montreal in 1856) was the major industry. It employed close to 500 workers and had the greatest financial and building prospects in the area.

The GTR brought a building boom the likes of which we haven’t seen before and since. The GTR bought 85 acres and was located south of the Danforth to Gerrard Street, then Lakewood Avenue, east from the present Victoria Park and west to Woodbine Avenue. It had the largest freight yards and marshalling yards and the largest roundhouse in any part of Ontario, maybe Canada.

Because of the GTR, the village, later town, of East Toronto, was formed in 1888 (130 years ago). Because of the railroad, prosperity reigned.

The Main and Danforth area plays a role in the history of Canada’s greatest horse event, the Queen’s Plate. The Queen’s Plate was first run in 1860, and many sports fans think that in the east end it began in 1876 at the Woodbine Race Track. Not so. The week-long Queen’s Plate was held 150 years ago in June of 1868 in a place by the name of the Newmarket Race Track, located on the northwest corner of Main and Danforth, a site which also boasted a fine hotel. A year after Confederation, approximately 10,000 people arrived in the area to watch one of the greatest sports events in the country.

In those days, there were no streetcars or automobiles, no highway as now, only the Kingston Road and the dusty trail on the Danforth. But there was train service, and it brought in thousands of people to see the Queen’s Plate. High society, the Governor General, Members of Parliament, city officials, and people from all walks of life, including the down and out and downtrodden. They came by horse, they came by carriage, they even walked a great distance. It was so crowded that they had to use the army to restore order.

One must remember: Canada was only one year old, and for 10,000 fans of this event, it was spectacular. The horses lined up, the crowds roared for their favourite. This was a special two-mile race, and as the horses went round the track, the cheers followed their path. Who would win Queen Victoria’s 50 guineas? In the end it was close, but a lovely horse by the name of Nellies won with a time of 3.06.5 minutes. Its owner was Jack Fisher. The festivities went on and on, making history at Main and Danforth.

In the early 1890’s until 1922, the Aberdeen Curling Rink housed sports, recreational, cultural and agricultural events on the east side of Main Street. The curlers of the area won many championships. The rink hosted dances and musicals and plays by the residents. Special agricultural fairs would be held in the building, and farmers from Markham, Scarborough and surrounding areas would bring their poultry and produce to display.

Our Hope United Church, then called the Hope Methodist Church, was located on the southwest corner originally. Hope Methodist and other churches put together a working committee and group to help the less fortunate people in the area, long before welfare and food banks.

We had the first RR YMCA on the east side of Main Street, which later became the first hospital and library in the vicinity.

One of the first funeral establishments was and is located on the east side of Main Street where the present Giffen Mack Funeral Home is located. There were quaint houses and buildings on both sides of Main Street, places like the Ideal Theatre (1914).

There is still a lovely house, currently a doctor’s office, on Main Street just south of the Danforth, threatened to be demolished.

There used to be lumber yards and coal yards on the Danforth. There was an old gas station on the west side, near Stephenson Avenue. Before automobiles, it used to look after horse-drawn carriages and buggies.

Stay tuned: I will be doing walks and talks about your historic area of Main and Danforth – and area you should be proud of!

This article has been updated to reflect that the GTR opened from Toronto east to Montreal in 1856. Thanks to the Toronto Railway Museum for the correction!

Thank you so much for this article. I have lived in the UK for many years but I grew up on Barrington Ave ( 1st street east of Main on the Danforth). I fondly remember the Ideal Theatre, Dominion Coal & Lumber and the Esso Gas Station perched on the southeast corner of Danforth and Main. I remember the United Cigar Store on the Northeast corner and Humphries Pharmacy next door. I attended Coleman Ave school long before it was knocked down and played amongst the roundhouse ruins on the south side of the railway tracks. Up to the age of 12 the area was my home and playground and to this day is the source of so many cherished memories.