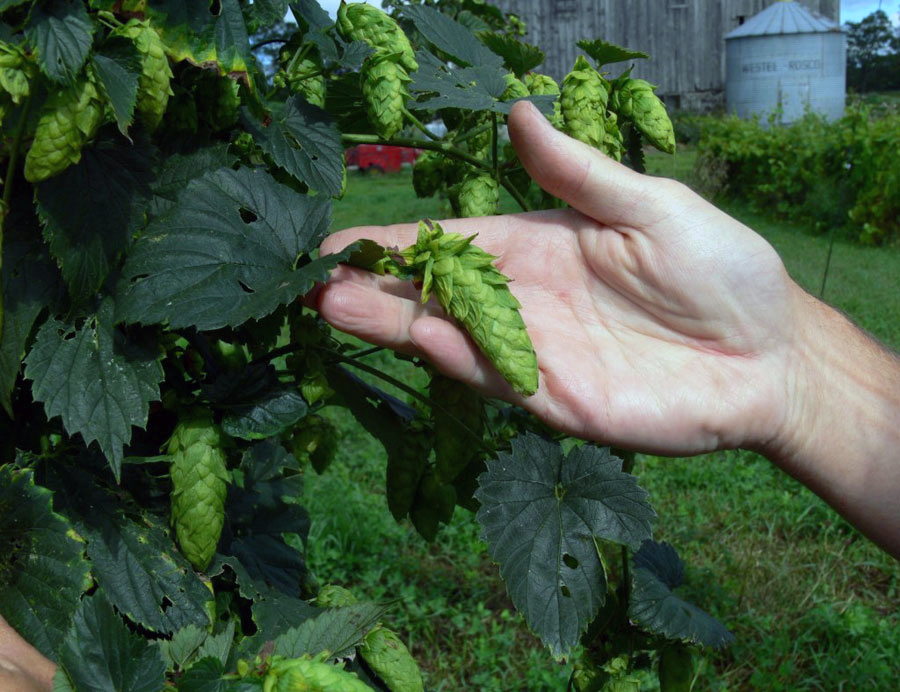 Most people make an automatic connection between beer and hops. They’re the ingredient that gives beers and ales their tangy, bitter taste. But – surprise! – hops are also considered herbs. So much so, that they’ve been named the 2018 Herb of the Year by the International Herb Association.

First, a little background on Humulus lupulus (the formal, botanical name for hops). It’s a giant perennial vine that likes to grow straight up to about five metres tall. The plants are strung up on wires to support them, a bit like wine grapes. Hops plants are either male or female, and it’s the ladies that are important. The female flowers (called “cones” because they look like small, soft, green pine cones) are the ones that contain the cool oils and other compounds that make ales and beers pop with flavour.

The flowers make you drowsy

Hops checks the boxes in all three categories to qualify as herb of the year: medicinal, culinary and decorative. Unlike most of the herbs we know, hops made their name in the culinary field (brewing) first. The medicinal side came later, when people noticed they had antimicrobial properties that helped keep beer from going bad. (At least that’s the story, though I have to wonder if it was just an excuse to drink more beer.)

But it’s true that hops, even without the alcohol, became widely known as a sedative and sleep aid, beginning in the 16th century and stretching on through Victorian times to the early 1900s. Sleep pillows, teas and tinctures were made with hops. Even poor King George III is said to have slept on piles of hops pillows to calm what his subjects thought of as his madness.

The Indigenous people of North America also traditionally used hops flowers as a sedative and analgesic, and for kidney and urinary troubles, earache, toothache, coughs and colds, gastrointestinal disturbances and healing wounds. Early Arab physicians recognized hops’ digestive and calming properties, and they’re considered a medicinal plant in India and Asia even today.

The search for how and why hops work continues in many modern studies, especially in Europe. Researchers are investigating the plant’s effectiveness in other areas such as reducing hot flashes, battling cancer, reducing inflammation and lowering blood sugar levels.

Whoever first plopped hops flowers into their brew kettle really started something. Today’s brewers take hops very seriously. Mike Tempest, at the Beach’s own Left Field Brewery, explains, “We use hops to add bitterness, aroma and flavour.” And not just any old  hops, either. Different varieties have different degrees of bitterness and different aromas/flavours. Cantaloupe, pineapple, peach, citrus, berry and passion fruit are some of the flavour notes you’ll find in beers and ales, depending on the  brewer’s choice of hops.

Hops varieties with a higher-acid reading deliver a stronger bitter punch, and  lower-acid hops excel at adding aroma and flavour. Until fairly recently, it was all about the bitterness, with only a few aromatic hops used to finish the brew. But the boom in craft breweries has encouraged brewers to produce small-batch beers and ales with a creative mix of aromas and flavours, as well as degrees of bitterness.

Hopyards springing up in ON

Ontario, it turns out, is in a pretty good position – literally – for commercial hop growing. The plants need long days to flower, but can’t stand too much cold. “The hops industry has increased significantly in the last eight years from 15 acres to 145 in 2017,” says Bianca Jamieson, at the Ontario Ministry of Agriculture, Farms and Rural Affairs (OMAFRA). Growers had sales of nearly $1.5 million last year, and there’s plenty of room to expand. Currently, just five per cent of the one million kilos of hops used in Ontario are supplied by local hop growers

Hugh Brown, of Heritage Hill Organics and past president of the Ontario Hops Growers Association, recalls how he began as a grower. “I always had an interest in craft brewing. I come from a beer town, Barrie, where the old Molson brewery was.” Brown got his first little hop cuttings in the early 2000s from Walter Hogg, master brewer at Molson’s.

Now he runs his own small hopyard near Barrie.

“It’s kind of a neat plant,” Brown says appreciatively. “It’s a beautiful bright green.” At harvest time, the vines are cut off at the root and taken down. Then some growers people hand-pick the cones, and some use machinery. There was one time, Brown tells, that he set the cut plants on his picnic table and picked the cones there.

For commercial growers, insects and downy mildew are the biggest problems, he adds, and the OHGA works to find solutions and ways to grow hops sustainably.

Ready to grow your own?

Hops are widely grown as ornamental garden plants and used in fresh and dried flower arrangements. Some folks cook the stalks and leaves or use bits of the cones as a bitter spice.

If you want to add hops to your garden, here are the basics:

You can dress things up by putting the plain bag inside a slightly larger bag that’s embroidered or made of decorative fabric. Stitch closed or tie with ribbon. (You may be able to find pretty bags ready-made.) Tuck under bed pillows to ease tensions and help you or a loved one fall asleep.

Mary Fran McQuade is a local writer specializing in gardening and lifestyle.