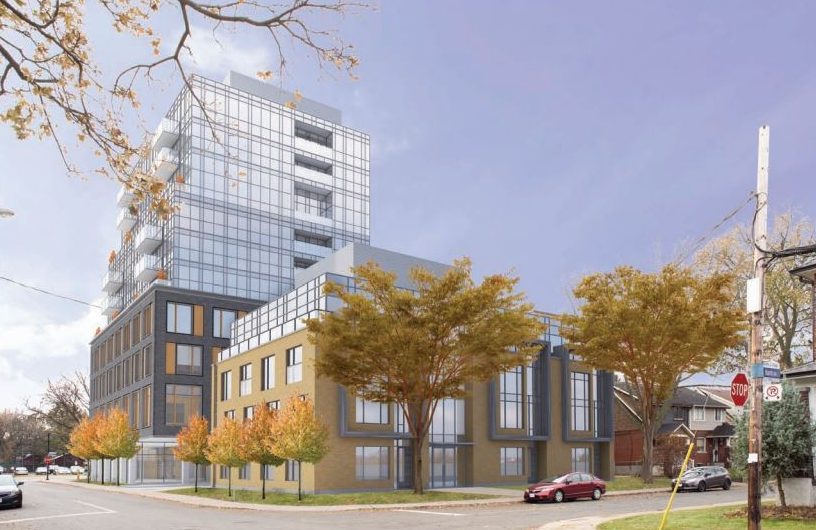 Looking southwest towards the site from Chisholm Avenue. The proposal includes a four-storey rental apartment building. PHOTO: Sweeny and Co.

A recent development proposal for seniors housing on Danforth might be a bellwether for a broader building trend in Toronto that emerges as Canada’s population ages, industry experts say.

In December, the city received a development application for the Shoppers site at 2494 Danforth Ave. The official plan amendment and rezoning application proposes a 10-storey, 140-room retirement home and a 20-unit, four-storey apartment building that would be linked by underground parking—a departure from recent condo plans that have been hashing nearby.

Landowner Tawse Realco Inc. is working with Verve Senior Living and the latter’s development arm, DCMS Realty Developments Inc., on the project, and a spokesperson for the developer says the decision to pursue a retirement home in the area rather than condos was partly based on location.

The number of services, including transit at the nearby TTC Main Station, and retail within walking distance from the development site are important, since most of the future residents of the home won’t be driving, said Gesualdi.

DCMS anticipates the the 20 one- and two-bedroom “condo-style” apartments that would be housed in the separate building on the lot’s north end will be occupied by seniors who aren’t quite ready for a retirement home but may want to use the services it offers, from medical treatment to meal plans. “For a senior that doesn’t want to necessarily move into a retirement residence, they’ve got the option of renting a unit in behind,” Gesualdi explained.

The retirement-home structure would feature accommodations and amenities for unassisted and assisted living, including care for residents with Alzheimer’s and dementia, as well as 16,000 square feet of retail space. Gesualdi could not confirm whether or not Shoppers would be the future anchor tenant for the retail component of the structure.

Gesualdi also expects Toronto will see more proposals like this in the coming years based on demographics. “Over the next 10 years, yeah, absolutely—you’re gonna see an increase in these types of developments,” he said. “Everybody’s well aware of what’s happening with our aging population,” he added.

In 2016, 5.9 million people in Canada were aged 65 and older, according to the census that year. With 5.8 million people in Canada no older than 14 at the time, 2016 was the first time census data showed seniors outnumbered children, according to Statistics Canada, which notes Canada’s seniors’ population hasn’t been increasing this quickly since 1871.

Gesualdi is not alone with his market prediction. Ben Myers, president and founder of Bullpen Consulting, a Beach-based real estate consultancy, suggests aging baby boomers will fuel this trend.

“You look at the population—all of the baby boomers are getting into their 70s, right, so they’re eventually not going to be able to manage these homes that they have, and I think a lot of them want to stay in the community that they’ve lived in their entire lives, or at least their adult lives,” he explained.

Myers also said the expansion of rent control, which as per the Ontario government’s Fair Housing Plan announced in April 2017 is now applied to rental units constructed after 1991, could make retirement homes an appealing option for developers who might otherwise have built apartments.

With rental increases that landlords can charge now limited on newer buildings as well, retirement homes—with their meal plans, medical services, and other revenue generators—could provide a better return, he suggested.

As a nanny bomer more highscrapes are not sensitive to community living . Stuck in high towers which Toronto seems to be partial to is now considered passe by anyone following cooperative living no matter be it seniors or immigrants. Just live in a small structure when the elevator shuts down. Windows don’t open look to other countries please seniors need light air and access.

I am very interested in this development. I am 74 and live on my own in a condo. I will be looking for a room with meals and housekeeping in a few years. I grew up on Harris Avenue. My parents owned a house there from 1945-2008. This location is perfect for me. Please keep me informed and I would like to be on a waiting list as soon as possible.