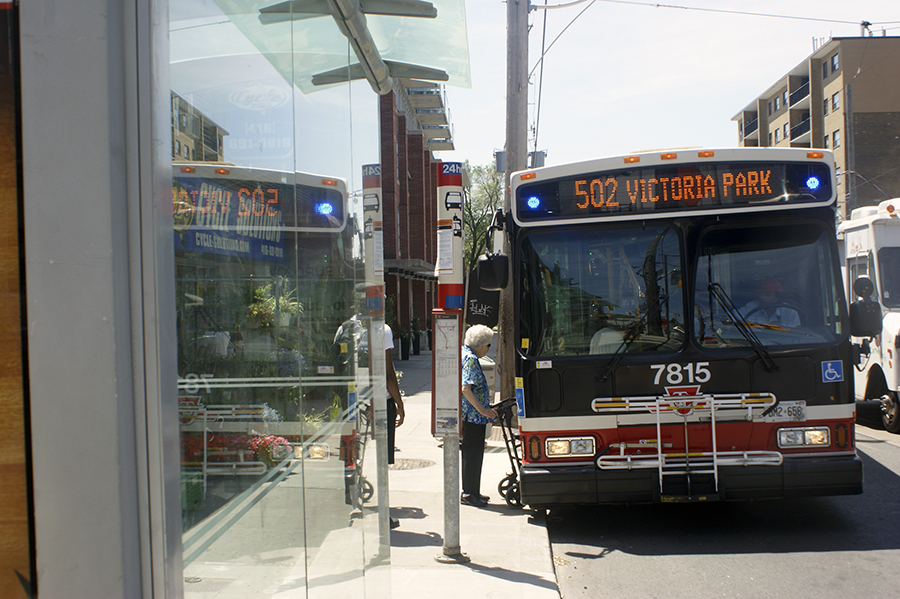 A Cliffside entrepreneur says disjointed bus service is hampering business development on Kingston Road, so he’s launched an online petition to draw attention to the issue and call for a dedicated TTC Kingston Road bus route for Scarborough.

Dr. Gerard Arbour, who has operated Kingston Road’s Bluffs Chiropractic for 25 years, created the petition on change.org in mid-January. To date, it has garnered more than 1,800 signatures online.

“I’m very pleased with the response,” said Arbour. He decided the time was ripe for the petition because of the TTC’s recent decision to begin running bus service to Bluffer’s Park this summer.

“To have some continuity in the busses would certainly be helpful,” he said.

Currently, several busses operate along different stretches of Kingston Road, meaning it would take multiple transfers to travel the length of the one-time highway.

Arbour’s initiative has the approval of Ward 36 Coun. Gary Crawford. “I applaud any petitions that the community wants to do,” he said.

Crawford said the push for expanded bus service has the support of the other councillors whose wards Kingston Road passes through, including Ward 32’s Mary-Margaret McMahon, Ward 44’s Jim Hart, and Ward 43’s Paul Ainslie.

The TTC is in the process of “reviewing the transit services along the Kingston Road area as part of a Scarborough East Area Study,” said Hayley Waldman, a spokesperson for the transit commission, in an email statement.

“We will be sharing our proposals and will begin consulting with customers in the coming weeks,” the statement read.

Local councillors are working together to get the TTC to re-examine increasing the scope of bus service on Kingston Road.

“The best-case scenario would be [a bus route for] the entire length of Kingston Road,” he said.

The Ward 36 councillor said the TTC has looked into improving service on Kingston Road before, but he suggested with recent condo development in the area that the need is greater today.

“The numbers may not have been there five or six years ago,” he said.

“There’s still a need and a desire to do this,” Crawford added.

Crawford noted how the lack of such a route impacts the day-to-day commutes of locals.

“A lot of the time it’s just students who are trying to get home after school,” he explained.

What do you think about Kingston Road transit? Let us know in the comments.

A lot of people saying they want a through-route along Kingston Road. But where do you connect it to the subway? Coxwell?
If you live in a condo near Kingston Road and Lawrence, would you really prefer to ride all the way from Coxwell?
Not saying it cannot be done, just wondering from an urban planning standpoint how the locals envision such a through route working?

I think the people on Kingston Rd are saying they don’t need to connect it to a subway. Just a bus from the beaches all the way to, at least, morningside dr.

I live at Kingston Road and Midland and to get the Centennial campus at Ellesmere and Kingston I need to take three buses and it can take nearly an hour to travel 8km. Being able to take one bus would save considerable amount of time and effort.

No bus route currently. So…….of course a bus running along Kingston road is a necessity!!! This isn’t the dark ages. I cannot for the life of me understand why there is no bus service from Vic Park to Eglinton or Morningside. It’s absurd and long overdue. Please give us some transportation!!!

I live on kingston rd. and find the connections all ok but in winter the 502/503 that come into bingham loop were not up to mark and at one point i waited for over an hour and when i walked to the main road i noticed that about ten buses went by with the “not in service” sign up and finally when a bus came in the driver gave me a number to call and complain but the following week the same thing happened – its cold waiting at bingham loop and i would suggest some looking into as this stress made me very sick and its not fair as the bus drivers are in a nice heated bus.

I have been pushing for the 12C to run regularly along Kingston Road for about 2 years now. I think the reason they changed it was to service Variety Village. But that closes at 10pm so why do we need the bus to go along that route after 10pm, a route that services zero residences? There is already the Cliffside bus and even the night bus that goes by. Everyone who lives from Birchmount to Cliffside south of Kingston has to walk 10-15 just to get the bus. Ridiculous

It took 20 years for Variety Village to get a bus stop, which also services Birchmount Collegiate. You not only need a petition, you need it addressed at the upcoming Municipal Candidates Meetings. Vareity Village used to have All Candidates meetings, maybe call them and ask them if they are planning any and if not would they do them for Ward candidates, the Mayor and Provincial Candidates too.

When I was a kid I remember the bus route Highland Creek – Bingham, would take it to my grandmothers house on Queensbury Ave. Once the Warden subway opened the TTC assumed everyone wanted to go to there and the route was cancelled. I don’t take TTC often but I believe it would now take 3 buses to do that route. There are about 15 developments going in on Kingston Rd. between Victoria Park and Port Union, a lot more cars will be on the road, better transit will sure help.

Beach Metro please remember to do things like this is your articles, when you mention how the community can get involved post a link in your article so it can be more interactive.

Thanks to Gerard Arbour for starting the petition it as this is a great service to the community. I took part in the TTC survey they sent residents along Kingston road years ago and complained there should be ONE bus that goes all along Kingston road. I take classes at the University of Toronto in Scarborough, as well as Centennial College Scarborough, I have to take three buses to get there in order to go one direction on Kingston road. For the sake of our students, the Kingston road corridor running through Scarborough is a waste land, this is a lower income area that deserves to be better serviced. I truly hope the TTC and our counsellors are reading these posts, Beach Metro can you send a link to these comments to their representatives then do a followup article, if you could facilitate interaction like this between your readers and the people who make change happen then you would truly have an interactive newspaper that could make change happen. I am one of your donors and I’d gladly donate more if you could facilitate positive changes in our community to happen such as what I’m suggesting. It’s in your power to do it.

I just found the link to the petition, everyone please sign it and share it on social media, let’s see if we can make change happen! https://www.change.org/p/toronto-transit-commission-dedicated-ttc-kingston-road-bus-route-in-scarborough

Thanks for sharing the link Denise. Best Regards, G.

Its a no brainer, a Kingston Rd bus will help alleviate Bloor train overcrowding. Why bother have so many feeder routes to an overcrowded tunnel train? I drive four days a week to work from Dundas/Kingston to Morningside. I see many different buses all looping north at various locations along Kingston Rd. An example would be the Markham Rd bus, this bus stops on the right side of Kingston (eastbound) and just shy of Markham and then must navigate quickly to the left lane to allow it to turn north on Markham Rd. Car drivers have to brake or honk to avoid slamming into the bus. Its total folly. Lets have an express bus at rush hours too! The TTC planners have it all wrong. We like the surface routes just like old times, as mentioned in some of the other replies, when there actually was a Kingston Rd bus!

Recently I moved to Kingston Rd & Lee from Queen & Logan. Granted, it’s hard to beat what I’ve considered excellent TTC service for years from the 501 Red Rockets & buses that traverse Queen St., but the infrequent TTC bus service along Kingston Rd to everywhere has left me feeling that now I live in a different, less fortunate country, and YES, too many transfers are necessary to arrive at significant “Points East” along what used to be Highway 2-to Kingston, indeed!
I’m a great walker, a senior & I use a bike in good weather. Since 2004 I have chosen NOT to buy another car-cheaper on the wallet & better for the environment & the traffic gridlock situation along Kingston, and although I can take a lot of cabs for the cost of car maintenance, doing so only contributes to the pollution & gridlock problems I just mentioned. But I do have that choice; many people in my situation can’t.
I fully support Dr. Arbour & Coun. Gary Crawford’s initiative for more frequent & continuous public transit along Kingston Rd.

I have wondered for years why you need to transfer two or three times to travel along Kingston Rd. A single bus route should also include Kingston west of Vic Pk. There’s no reason you couldn’t still have some kind of route that connects to a subway. Don’t put this off for years!

Speaking of transit changes in The Beach; we lost a streetcar stop at Queen and Lee.
The heart of Kew Beach has no stop.
The change seems to be meant to accommodate the newer longer [yet to arrive] streetcars but the decision looks like it was made by a non-beacher from a map in on office far far away. The stops are at logical distances but they are not practical.

Given too that the PRESTO is now hop on/ hop off, who does not want to come home from work and hop off /on at Lee to run an errand at one of the several banks, the grocery stores or library? No one really wants to get off at Bellefair or Wineva and then head over a few blocks to Lee. It is quite a distance, in fact so much of one that Lee could have it’s own stop.

On the plus side the heart of Balmy Beach has a new stop. How many times over the years, have I stepped out of The Fox on a cold dark night, while a streetcar rolled on by during my walk over to the Spruce Hill stop?