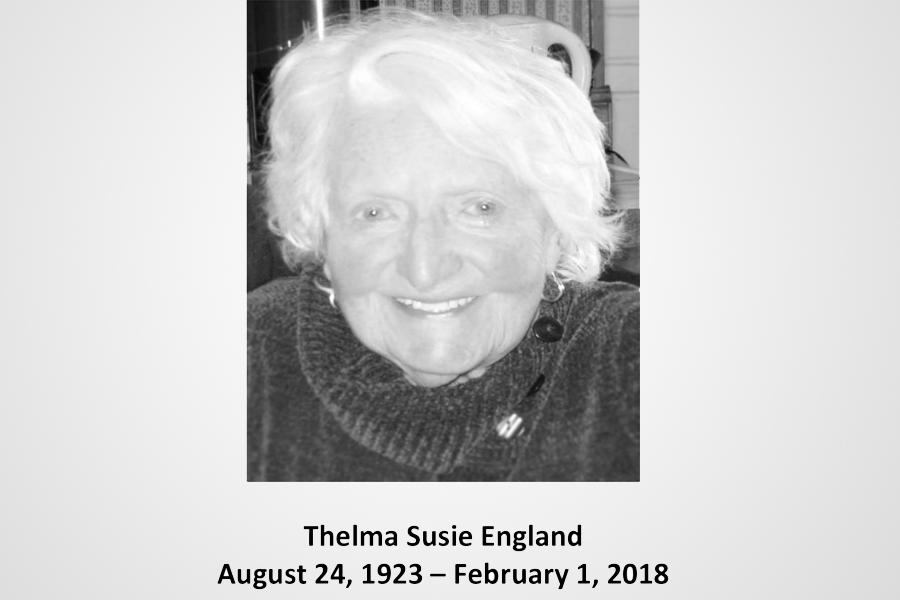 Long time beach resident and homemaker, Thelma Susie England, passed away peacefully in her home. She lived a long and joyful life until the age of 94.

Thelma was the oldest born of five children in the small town of Sydney Mines, Nova Scotia. Her father worked out at sea cooking on the fishing boats, so he was away a lot. Her mother was very thrifty and had to fend for her family alone while he was away working. This meant she depended on Thelma to help her to do chores and look after her siblings.

As a young woman Thelma moved to Toronto and landed a job as a Nanny/housekeeper. Later she joined the Canadian Women’s Army Auxiliary Corps based in Montreal, Quebec to provide administrative support. Thelma returned to Toronto after the war and met Roy England who grew up in the beach area. They fell in love and got married on May 3rd, 1947. They started their life together in a house they bought on Connaught Avenue. As their family grew they moved to Elmer Avenue. With a total of nine children in 1963 they won the Irish Sweepstakes and that is when they bought a bigger house on Bellefair Avenue.

Roy and Thelma became lifetime members at Bellefair United Church and Thelma donated much of her time to the women’s auxiliary. She loved to cook and entertain and made many delicious meals. She was famous for her apple pie that won prizes. Thelma joined a drama club and was in a few plays. She loved to play scrabble and Euchre and she learned to play Bridge in her early 70’s. During Roy’s retirement, they both became very active as extras in the Film Industry. So, don’t be surprised if you see them in a movie. Just to name a few: Stanley and Iris, The Fly and even the Perry Mason show. Thelma loved music and took piano lessons. She was an abstract painter, a knitter and a crocheter. Thelma loved to laugh and had a great sense of humour. She was well known in the beach community for her kindness and respect for others.

Predeceased by her husband Roy Edward England, her daughter-in-law Sandy England, and her son Christopher Norman England. She is lovingly remembered by her children Susan Barrett, Janet and Bob Ferguson, Roy England, John England, Alexandra and Jim Fulton, Kim England, Jane and John Douey, Judy and Tim McCarthy. She will be missed by her 13 grandchildren, 17 great grandchildren and first great, great grandchild Henry.

A memorial service will be held at Waverley Road Baptist Church on Wednesday March 7th at 11:00 a.m. Please come and share your memories about Thelma England.