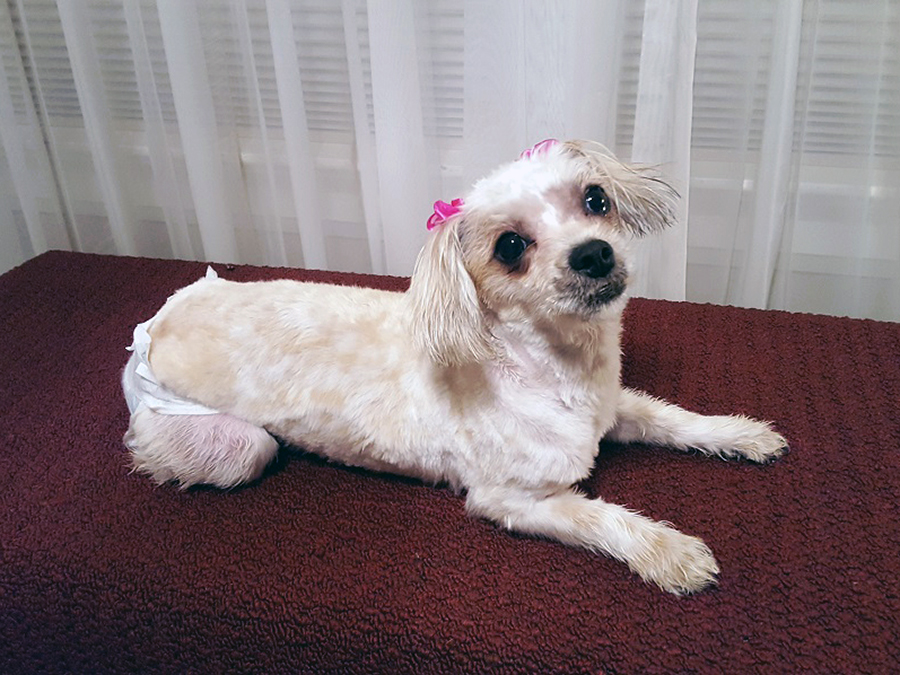 Look at us! We made it through the January blahs and now we’re happily tumbling head over heels through the sappy sweet Month of Love. Let’s go walking in the dog-park, hand-in-paw, and do a little reminiscing. While we’re at it, I’ll throw in some heart-warming updates for all the pets I featured in 2017.

Mr. March was none other than OB – one of my own rescue cases. OB, short for ‘Obese Beagle,’ is working on changing his name to ‘Outstanding Beagle’ which seems appropriate. At his last weigh-in, he’d lost a whopping 11 pounds! And while he will likely remain at Sheba’s Haven as a work-in-progress, OB is not complaining. He loves his big forever foster family and his big backyard in the country. With all the snow we’ve been having, he’s been especially useful at clearing paths for the other dogs. Catherine, his mom, fondly refers to him as her little Kubota tractor.

While OB may be a pro at clearing snow, our Mr. April was the bomb at clearing the food shelves at Beaches Animal Hospital. Tarzan, the forever-famished acrobat cat taken in by the clinic as a stray had a habit of nibbling the corners of the pet food bags, thereby providing excellent discounts to customers. But Tarzan has retired from his job in sales for good reason. A gentleman met and fell in love with the little price chopper, adopting him back in October. Now that’s something to yodel about!

Love continues to fill the air when it comes to our Miss June. Like Tarzan, the Toy Pomeranian taken in by Sheba’s Haven has her share of acrobatic skills – although nobody would have suspected it at the time of rescue. Beatrice was unable to walk back then, but when she suddenly performed the Pomeranian dance for her rescuers, soon after her first vet exam, everyone held out hope that the temporary paralysis was nothing more than an episode of Vestibular Disease common in older dogs. I’m happy to report that was the case! Beatrice starts Agility Classes in a couple weeks. Her mom enrolled her. That would be Faye, formerly known as Foster Mom. Given her mad agility skills, BeBe was able to point her cupid’s arrow precisely at Faye’s heart and the rest is foster failure history.

Speaking of fabulous foster failures, Judy of Happy Tails Rescue pleads “no contest” with respect to fostering and falling hopelessly in love with our Miss September. Unlike Beatrice, Puppy Mill survivor Joy did in fact suffer a spinal cord injury. But agility classes aren’t completely out of the question. Regular trips to the chiropractor have helped strengthen her muscles and improve mobility. Nevertheless, Joy has been rendered incontinent. Judy shrugs it off with a smile. Changing diapers on behalf of her little canine Pez dispenser is a small price to pay for all the joy that Joy brings. If the perfect adopter doesn’t come along, Joy will always have a home with her. Check out her after-the-bath pose with those pretty pink bows, above– Judy didn’t stand a chance.

And the foster failure happy hits of 2017 keep on coming! Skipping over July for a moment, I’d like to give a howl-out to my Beagle Bash for Cash promo poster boy from November! Li’l Mac pawed the way for our annual event as yet another example of where the money goes. You may recall he’d been left behind in an empty apartment after his owners moved out. Macaroni has struggled with an auto-immune disorder resulting in loss of fur among other things, but he’s getting better and is now sporting a tail in full bloom! The best thing about his tail these days is how it wags non-stop. He’s got lots to wag about, least of which would be the odd loaf of bread he steals from the kitchen counter. Thing is, he’s pretty good at stealing hearts, too. I think what’s making that tail wag more than anything else is the fact that my rescue partner and her husband recently declared their BIG love for newly nicknamed…Big Mac. Fostering their little bread thief wasn’t cutting it for them anymore. Let’s just say he’s the main breadwinner of the family now.

Last but never least is the dynamic duo I featured in July during the dog days of summer – if you can remember a time without snow. Lionel and Clara arrived at my door after the good folks of Gananoque Humane Society saved them. They’d been found struggling for survival in the wild, riddled with fleas and ticks. Unsurprisingly, they both tested positive for Lyme disease but were thankfully not symptomatic.

Both Lionel and Clara remain symptom-free to this day, which is encouraging news for their future. If you’ll recall, Clara arrived with a severe case of Cherry Eye in both peepers.

Corrective surgery has greatly improved the condition even if she still looks a bit like the subject of one of Margaret Keane’s big-eyed portraits. Lionel’s eyes are perfect, but he does have a significant heart murmur which will need monitoring.

As their long-suffering foster mom, I can tell you I’m not immune to the foster failure phenomenon.

Truth be told, the most challenging cases can often be the ones that shock you into declaring your eternal love. If I’m missing a sock, a boot, or even a bath mat, I’ll find it in Klepto-Clara’s bed. Forget about laying down the ground rules. They fall on deaf ears. And yet, she will not be ignored. Not that she’s gone the route of feigning wide-eyed innocence to win me over.

No, Clara opts for demanding my utter devotion by bear-clawing her way into my lap until I yell “Uncle!”

Lionel is much more subtle about it – if you can call jumping on the couch for a head pat after indulging in an outdoor mud bath subtle. But you can’t deny how adorably he does that while wearing the equally adorable hipster lumber-jacket I ordered for him on-line because nothing but the best would do.

My Year in Review is dedicated to the Unfailing Foster Parents of our many wonderful animal rescue groups. Unconditional love is best learned when fostering an animal of unconditional perfection. If you’ve ever thought of fostering, give your favourite animal rescue group a call to learn more about opening your heart and home to an animal in need. It’s never too late to kick off the New Year right!

Marna Gale is the founder of Big On Beagles Rescue and an Unfailing Foster Parent herself.