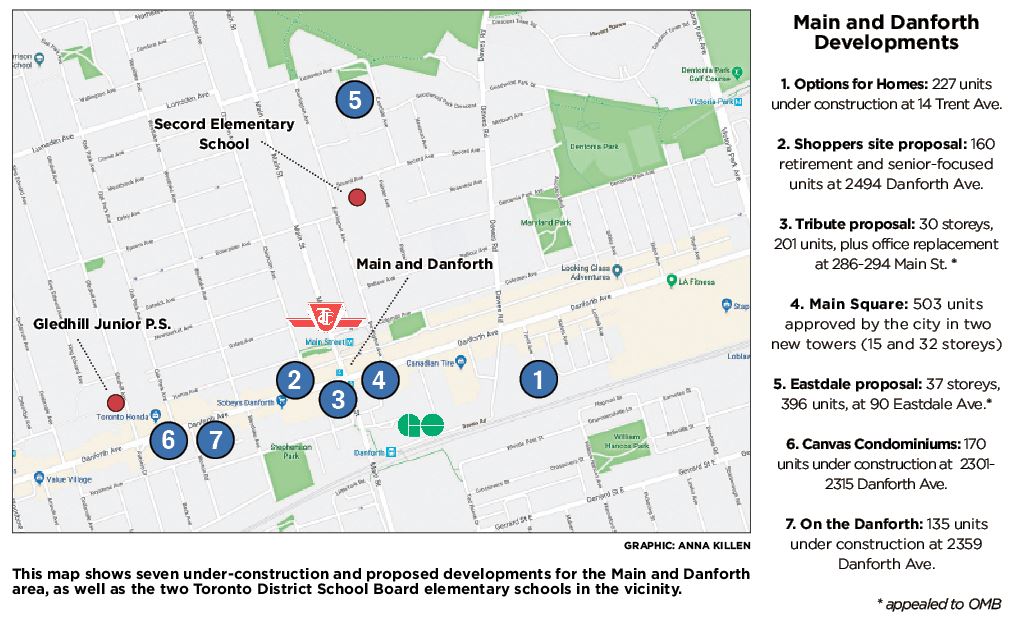 It might be easier these days to argue against motherhood and apple pie than to question doctrine that underpins policies encouraging new density on land near public-transit stations.

On the simplest symbiotic level, the concept is unassailable and important. But cities – like ecosystems, medicine and economics – can only be understood by considering the interplay of many relevant factors.

With seven major developments proposed, approved or under construction within 800 metres of the Main and Danforth transit stations, we may already be late in asking how much density is too much? Also, and probably more important, how about asking what types of density do we lack in an area with an out-of-balance land-use mix, high concentrations of low-income households and built-form challenges such as long blocks and a rail-corridor barrier effect that inhibit walkability and the local economy.

Main/Danforth has been deemed a “Gateway Mobility Hub” by Metrolinx (Ontario’s transit-planning agency and step-parent to GO Transit). It’s a station zone where intensification is encouraged, though not on the scale of what’s planned for major “Anchor Hubs” (Union Station, Pearson Airport and some of the attempts at new suburban downtowns).

The seven developments in the pipeline include four high-rise towers and 1,942 new residential units in total. At current average household sizes, we’re talking of 4,467 to 5,438 newcomers – population growth of 26 to 31 per cent.

We might be able to absorb it, but to do so well will require changes in types of development we get, as well as some big public investments.

At the January public meeting to discuss Tribute Properties’ plan to build a 30-storey condo tower near the southwest corner of Danforth and Main (across from Main Square, where two more high-rises already have approval), some called for more units big enough for families while others questioned whether local schools and daycares can handle larger households with kids.

Phil Pothen, chair of the Secord Elementary School Parent Council’s overcrowding committee, pointed out that Secord already has 14 portables, a situation that wouldn’t be tolerated in affluent parts of town. (A TDSB spokesman told us by email Secord is only at 82-per-cent utilization, but conceded that, “in coming years [it’s] expected to approach 100% with the port-a-pack included.” He said nearby Gledhill Junior Public School is at 93 per cent, though TDSB projections see it slipping below 90.)

There were the usual concerns about building heights and parking, things you’ll hear at nearly all development meetings no matter the magnitude of the proposals. Former MP Matt Kellway (who’s expected to seek the Ward 32 city council seat this year), also mentioned shortages of spots in local recreation programs and that Ted Reeve’s hockey teams sometimes have to drive to other parts of town to get ice time for practices.

But maybe most pertinent of all, considering new developments are predicated on proximity to transit, was a question about why we’re adding any density when it’s already hard to squeeze onto trains at Main in the morning rush. The answer – not that anybody on stage really articulated it – lies in the fact that residential is just one part of a healthy urban mix. There is spare transit capacity in the a.m. at Main/Danforth, but it’s on eastbound trains.

The place needs to become a destination in the morning again. As local historian Gene Domagala pointed out, it was jobs – a chain reaction of employment growth starting with the Grand Trunk Railway in the 19th century – that brought the towns of East Toronto and Little York into existence. And it’s going to have to be employment density or significant new institutional uses that breathe new life into this “Mobility Hub.”

It’s not a radical concept and it meshes with provincial policy calling for “complete communities.” Metrolinx also calls for employment as part of its Mobility Hub mixes. As Brent Toderian, the former chief planner in Vancouver, likes to point out, there’s a big difference between density and density done well.

There’s no set formula for calculating an optimum residents-to-jobs ratio for this or any context, but the 5-to-1 level Metrolinx found at Main/Danforth in 2014 was out of whack already. And because the developments in the pipeline are residential, the ratio is set to worsen. (The only new employment space proposed involves replacement of medical offices on the west side of Main, the bare minimum under current city regulations.)

With the private sector unenthusiastic about developing new non-residential buildings, Main/Danforth may need to be high on the list for government offices or a new college or university campus (that space atop the GO station might be ideal).

The city, with 181,000 on Toronto Community Housing waiting lists, still needs more residential, and some can fit this area (because seniors tend to provide eyes on the street without aggravating crowding in schools and on transit, the 160-unit proposal for Danforth and Chisholm shows promise). But a nuanced approach is needed.

The good news is that real experts are studying the area: City Planning has broken out the Main Street corridor from the Danforth Avenues Planning Study (DAPS), Metrolinx is working on its Mobility Hub plan and the Urban Land Institute (with the help of former chief Toronto planner Paul Bedford) has assembled a diverse group of mid-career professionals to produce a vision for a large part of the area east to Victoria Park. And now there’s word that “office priority” zones near East End subway stations will be recommended in the DAPS process.

But with established challenges this big, getting good density as opposed to merely more density is going to require creativity and serious re-examinations of long-held assumptions as well as courage on the part of politicians and bureaucrats to let the processes stray into uncharted territory.

No pressure, but we’ll be watching.

Stephen Wickens is a life-long East End resident and a semi-retired journalist. Connect with him on Twitter @StephenWickens1

This article has been edited slightly from the version that appears in the March 6, 2018, print edition of Beach Metro to reflect information that became available at a March 5 Danforth Ave. Planning Study meeting.