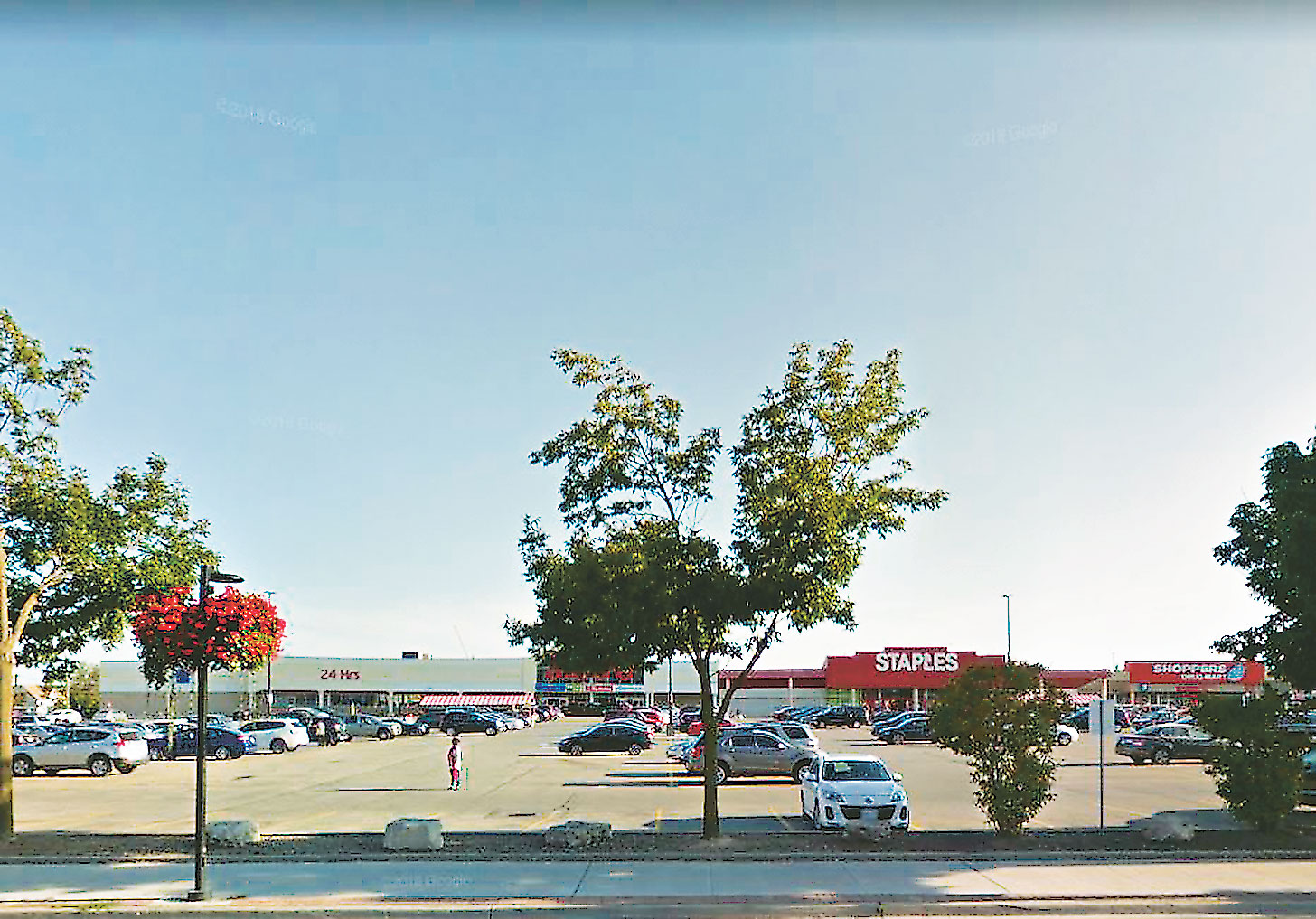 The sprawling parking lot in front of RioCan’s Shoppers World plaza is one of the focuses of an upcoming meeting to explore its potential. PHOTO: Google

Seated in back of Grumbels (290 Main St.), an independent deli/café set to close this month while city-planning staff consider a high-rise condo proposal for the land it rests on, local resident Gerry Dunn mused about the future of the neighbourhood.

“Where is my next Grumbels? It’s not here,” he said. “This is a distinctive place,” added Dunn, founder of the Danforth Village Community Association.

Dunn and other members of his community group see development coming to the area, and when it does arrive, they would like to see it be “balanced.” He notes that “there are certain priorities.”

As examples, Dunn mentions affordable housing, a variety of apartment sizes suitable for families and singles alike, and the kind of smaller retail spaces that foster independent—not big-box—retail.

These are some of the issues to be addressed at a community meeting later this month at Hope United Church (2550 Danforth Ave.).

On May 30, the Urban Land Institute, a non-profit, membership-based real estate organization, is hosting an open house and presentation from 6 p.m. to 9 p.m. It will showcase possible visions for Main and Danforth as well as the sprawling RioCan-owned Shoppers World plaza on the southwest corner of the Danforth and Victoria Park Avenue.

Paul Bedford, the city’s former chief planner and dean of ULI’s Urban Leadership Program, emphasized that the visions to be presented are not official development proposals by any means. They are part of the half-year-long program he leads.

“They’re ideas that people in their 30s who’ve been working in the field for about 10 years have come up with and think that these are ideas that should be put out there for consideration by city-planning staff and by communities and councillors,” he explained.

The Urban Leadership Program accepts 30 applicants from fields such as architecture, planning and real estate law per term.

It walks them through what Bedford called “the good, bad, and the ugly” of city building to teach them how to take charge in their fields. High-level industry leaders speak to the group, and then it is broken into teams to tackle a planning exercise related to a real-world site.

Last year, the Loblaws property at the southeast corner of Bloor Street West and Dundas Street West was selected by a ULI steering committee.
Bedford provided the questions that form the criteria for picking a site to study.

“What’s a really good learning opportunity? Where is something basically starting to happen? Where is city-planning department doing work in the area already or doing a study of? What are problem areas that need solutions?”

Bedford added overcrowding in local schools and the need for more public space are two problems in this area.

A RioCan spokesperson could not confirm any development plans for Shoppers World. But there are signs of a changing Danforth Village.

As well as the proposal for a 30-storey condo tower at 286–294 Main St.—including the beloved Grumbels location—for which a June 12 prehearing conference before the Local Planning Appeal Tribunal has been scheduled, a seniors’ residence and apartment building were proposed for 2494 Danforth Ave. late last year.

Current zoning for the Main Square site would allow landowner Talisker Corp. to build two more towers, including one on the privately owned public space abutting the southeast corner of Main and Danforth.

The Danforth Village Community Association’s Dunn and others will will have to wait for the event to see what ULI comes up with, and there will be a chance to respond to pitches.

Bedford provided some insight into what the presentations are going to consider.

“That southeast corner of Main and Danforth is pretty sad,” said Bedford. “There’s huge potential to create a new public square there as part of that Main Square development, so those kinds of things I think you’ll probably hear from the teams when they make their presentations.”