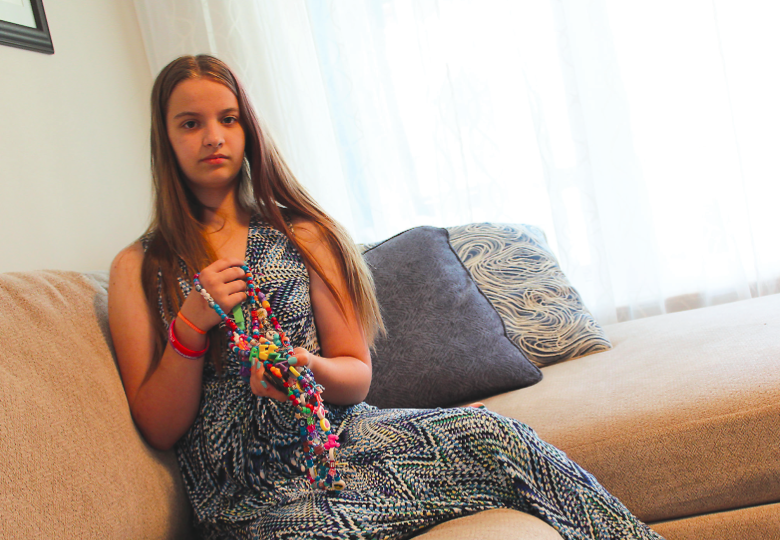 East York resident Sarah Calderwood thought her then three-and-a-half-year-old daughter Helena Kirk had an earache. It turned out to be something much more serious. Helena was diagnosed with acute lymphoblastic leukaemia, a disease that would put her through 841 gruelling days of chemotherapy.

“It was shocking and terrifying to know that our little three year old was going to be going through years of chemotherapy to cure her,” said Calderwood. “It was a very long journey. It was a very horrifying journey in many ways, but Helena was a real champion through it—very brave as you can see,” Calderwood continued, presenting Kirk’s collection of 650 “bravery beads,” each one representing a treatment she underwent.

Now 12 years old and cancer-free, Kirk isn’t through with fighting the disease. She is hoping to raise funds online to support her advocacy efforts for more treatment options across Canada for kids with cancer. A GoFundMe page has been set up in support of the cause.

Although a lack of funds is a challenge—it limits the amount of time Kirk is able to spend in Ottawa as well as things like online pushes and research efforts—the pre-teen has already been successful in attracting the attention of Ottawa.

“She continues to fight,” said Beaches—East-York MP Nathaniel Erskine-Smith, who Kirk first met with this past fall, in the House of Commons recently. “I ask all of my colleagues to join me in recognizing Helena’s passion and perseverance and to heed her words when she says, ‘I want Canadian children to have fair access to trials and treatments no matter where they live in Canada or how much money their families have,” he continued.

In his brief speech, Erskine-Smith noted that access to early-phase cancer clinic trials differs from province to province, and health insurance for out-of-province treatments gets denied—specific issues Kirk is in the process of meeting with Health Canada to try and change.

Her advocacy began last spring when she found out she was going to get a photo-op with Prime Minister Justin Trudeau while attending a conference for Children’s Miracle Network as a representative of SickKids. “I said to my mom, ‘Hey, what if we advocated to the prime minister?’” Kirk recalled. So mother and daughter worked together on a letter to the prime minister, and after receiving it Kirk said Trudeau encouraged her to continue her efforts.

She is dedicated to doing exactly that (at the very same conference she managed to meet with MP Anita Vandenbeld and Health Minister Jane Philpott) and shortly after her encounter with the prime minister she founded Helena’s Hope, her very own advocacy group.

“I won’t stop, because I’ve lost so many friends, I can’t stand to lose any more, nor can I stand the idea that this is happening to other people as well,” said Kirk. “I just can’t let that happen. My friends are fighting for their lives and this is what I’m doing to help with their fight.”

Already, she has come up with a proposal to improve access to cancer treatment for kids that has been endorsed by more than 20 top pediatric oncologists and an even greater number of cancer organizations. More funding would bolster public education efforts, as well as support focus groups and surveys, Calderwood suggested. “How do we get other people educated really quickly? Well, it’s very difficult unless you have money for somebody to pull something together to do a paper and to help educate,” she said. “We have no budget.”