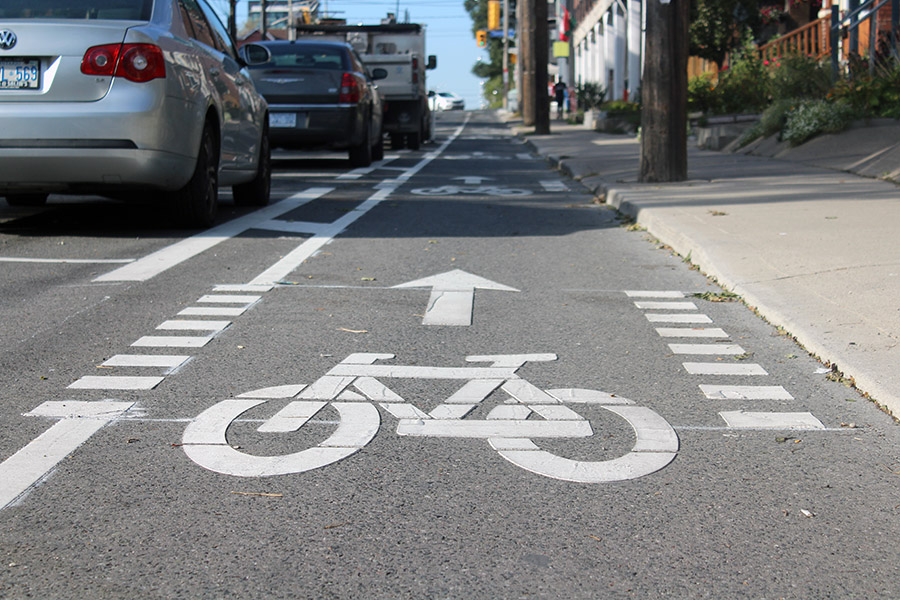 Cycling advocates are making the case for bike lanes on Danforth Avenue ahead of a council vote that could see the street redesigned.

On July 23, council will decide whether to undertake a Complete Streets study for the Danforth, an early step towards the possible installation of bike lanes on the avenue.

“The feasibility of and design options for cycling facilities would be part of the study, as well as pedestrian and road safety improvements,” city spokesperson Cheryl San Juan explained in a statement. According to the city of Toronto’s website, Complete Streets are “streets that are designed to be safe for all users: people who walk, bicycle, take transit or drive, and people of varying ages and levels of ability.”

Ward 32 Coun. Mary-Margaret McMahon put forward the motion to undertake the study at East York Community Council on July 4. “We heard loudly and clearly from the community that they were interested in Complete Streets on the Danforth,” said McMahon.
“It’s the right thing to do,” she added.

Cycling advocates in the east end have been pushing for bike lanes along the avenue for some time.

Gerry Brown, co-chair of Ward 30’s chapter of Cycle Toronto, a cycling advocacy group, suggested Danforth was a good candidate for bike lanes. “Really good protected bike lanes can easily be installed,” he said, noting the street’s width. “Will there be an impact on parking? Yes, but much less than on Bloor,” he added.

As part of Cycle Toronto’s’s advocacy for bike lanes on Danforth, the Ward 30 chapter recently set up a camera at Jackman Avenue and Danforth to track cycling traffic. During a 24-hour period, more than 3,000 cyclists were recorded travelling along the Danforth.

“These numbers were not a surprise,” said Mary-Ann Neary, Chair of Ward 32 Spokes, the Beach chapter of CycleTO, in a news release. “The Danforth is a logical east-west route for people on bikes, as well as being a fantastic destination. It connects to existing lanes on Jones, Greenwood, and Woodbine, plus the Bloor Viaduct. The Danforth is long overdue for protected bike lanes.”