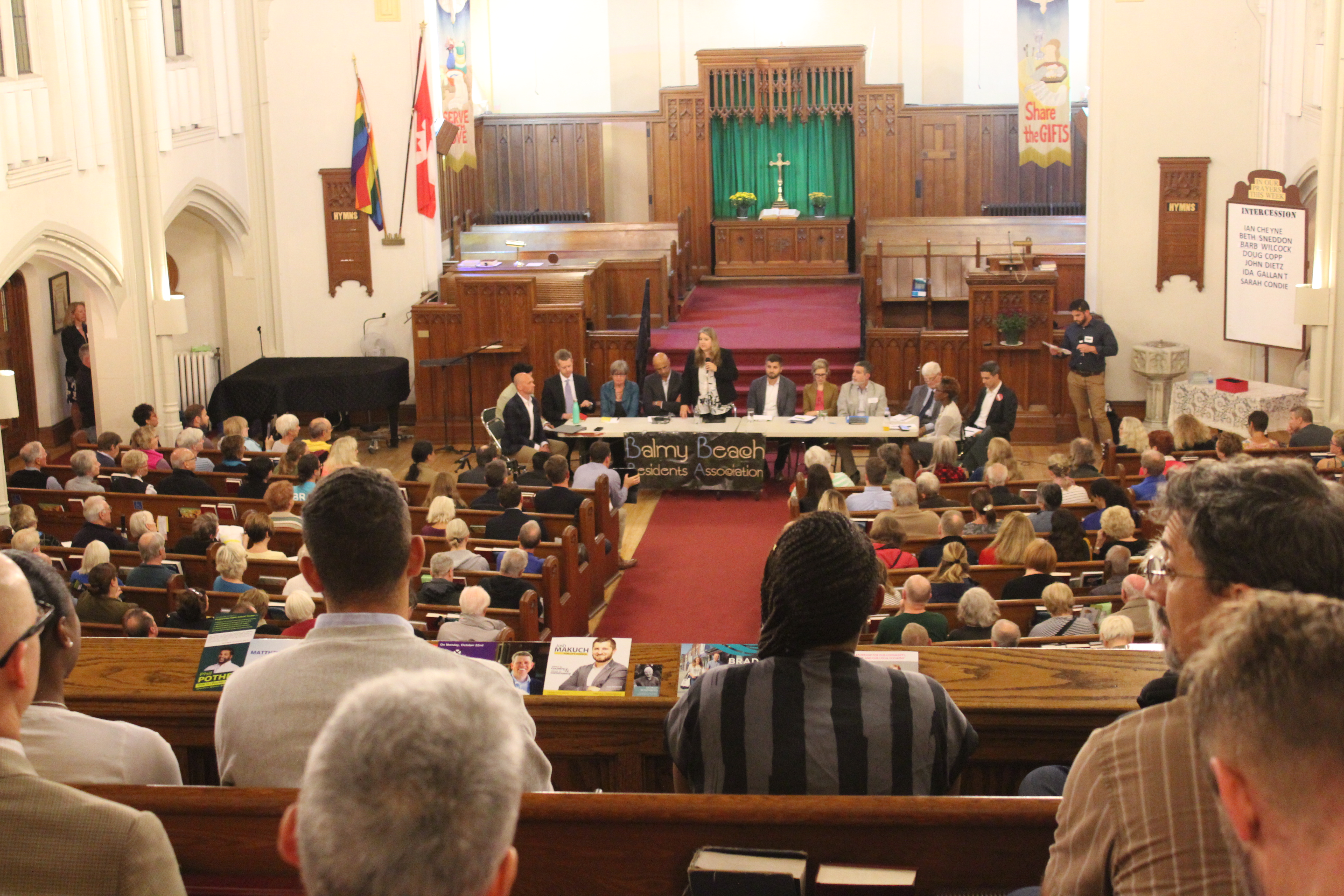 On September 24, candidates for Beaches—East York city councillor convened for a town hall meeting at Kingston Road United Church and the competition was steep.

From army veteran to music teacher and urban planner to environmental scientist, 12 candidates from a variety of backgrounds presented attendees with a plethora of creative ideas they would bring to city hall.

In the packed house of over 500 residents, the crowd listened intently with occasional bursts of applause as candidates explained their platforms and proposed solutions to the municipal issues affecting residents today. The seat for the newly merged Ward 19 is currently vacant. The current councillors, Janet Davis and Mary Margaret McMahon, have decided not to seek re-election.

Each candidate had 60 seconds introduce themselves with an opening statement. Following their statement, they each had an opportunity to answer one question on Development and Housing and another on Transit and Transportation, followed by one question on either Safety and Security or The Local Economy.
Here is a synopsis of each candidate’s response.

Brad Bradford
As an urban planner who has worked at city hall, Bradford said he decided to run because he grew tired of the “partisan politics and career politicians.”
PLAN TO ADDRESS LARGER WARD – Through a local council, create a structure of support that feeds into the upper tier of government.
DEVELOPMENT AND HOUSING – Build six-storey units along the Danforth, direct growth towards avenues and implement inclusionary zoning.
TRANSPORTATION (WOODBINE BIKE LANES) – Re-work Woodbine so that it works for everybody, continue with ten-year cycling network plan.
STRATEGIES ON CRIME – A balanced approach that addresses poverty, youth employment opportunities and mental health.

Paul Bura
Bura says he will use his 15 years of experience as a federal public servant to deliver hard work, accountability and transparency to city hall.
PLAN TO ADDRESS LARGER WARD – Double support staff.
DEVELOPMENT AND HOUSING – Look at cities in the nation that have created programs to increase density in the city through affordable housing.
TRANSPORTATION (WOODBINE BIKE LANES) – Connect start and end points to the grid. Create a north and south bike lane on the same side of Woodbine, protect it with a barrier.
STRATEGIES ON CRIME – Focus on increasing programs for mental health. Incorporate youth programs from 9 p.m. to 5 a.m., when crime is most likely to occur.

David Del Grande
Del Grande said that there are three driving issues in his run for councillor: Frustration with how the city is currently run; love for the city and community; and optimism that the city could do better with the right leadership.
PLAN TO ADDRESS LARGER WARD – Using data from the best case studies around the world as a model, form a local community council of engaged citizens.
DEVELOPMENT AND HOUSING – Gentle increase of density and growth in the neighbourhood to allow more residents to enjoy Beaches – East York.
TRANSPORTATION (WOODBINE BIKE LANES) – Address the timing of lights and parking issues. Study solutions from peer cities on bike lanes, learn from them and implement.
LOCAL ECONOMY (RESTAURANT PATIOS) – Work with the community to find the right solution.

Diane Dyson
As a lifelong advocate for public access to community services, Dyson says that she will ensure continued access so everyone has a fair chance and the city doesn’t “splinter apart.”
PLAN TO ADDRESS LARGER WARD – Create a “triage” for management of calls: information, advice and intervention. From there, delegate.
DEVELOPMENT AND HOUSING – Remove red tape on rooming houses and consider co-housing for small communities like book club and church members.
TRANSPORTATION (WOODBINE BIKE LANES) – Simplify bike lanes on Woodbine to allow for commuters to distinguish parked cars from stopped cars.
LOCAL ECONOMY (RESTAURANT PATIOS) – Bigger square footage of restaurants will invite big restaurant chains and threaten local small businesses.

Brenda MacDonald
MacDonald said that she has taught generations of piano and voice students in Beaches – East York. She aims to preserve the lake and surrounding watersheds through proper water waste management.
PLAN TO ADDRESS LARGER WARD – Unify the north and south divisions of the ward and improve communication at city hall.
DEVELOPMENT AND HOUSING – Provincial legislation for affordable housing.
TRANSIT PRIORITY – TTC relief line, bike lanes on Main instead of Woodbine to allow for smoother transition to Gardiner/DVP.
STRATEGIES ON CRIME – More programs for at-risk youth, better and more efficient reference checks for staffing recreation programs.

Josh Makuch
Makuch said that he brings his leadership skills, ,acquired from the Canadian military as platoon commander in Afghanistan, which has prepared him to take on the challenges and opportunities as city councillor.
PLAN TO ADDRESS LARGER WARD – Empower local organizations to make up for the gap between city hall and the constituency.
DEVELOPMENT AND HOUSING – Upgrade TCHC buildings, inclusionary zoning, increase the stock of housing and address from a supply and demand perspective.
TRANSIT PRIORITY – Downtown relief line, more service on Queen St. and Kingston Rd., increase frequency of downtown express buses.
STRATEGIES ON CRIME – Hand gun and assault rifle ban. Continue strategy and investment for youth programs.

Frank Marra
Marra said that he is dedicated to seeing things improve at city hall, while pointing out that promises aren’t being kept and policies are failing.
PLAN TO ADDRESS LARGER WARD – A promise to personally engage with any constituent that comes forward.
DEVELOPMENT AND HOUSING – Address anti-development thinking and change the regulations on affordable housing.
TRANSIT PRIORITY – Push for TTC to publish and meet performance standards set by council and neighbourhoods. Address the problem of fixed TTC routes and bulky streetcars.
LOCAL ECONOMY (RESTAURANT PATIOS) – Cost of patio permits have increased by 50 per cent since the beginning of the year, this is a barrier to small businesses. Make it affordable.

Morley Rosenberg
Although he lives outside of the ward, Rosenberg said he will bring nine years of experience as councillor, six years as mayor and ten years as regional councillor in the City of Kitchener as well as 20 years of service in its municipal court.
PLAN TO ADDRESS LARGER WARD – Form committees of seven to eight people to stay informed on local issues daily.
DEVELOPMENT AND HOUSING – Solicit funds from federal and provincial government and raise money to build affordable housing.
TRANSIT PRIORITY – Pass.
STRATEGIES ON CRIME – Work with youth, police and hospitals to address mental health, register handguns, eliminate assault weapons.

Adam Smith
Smith said that he will take a “no strings attached” approach to decision making at city hall because he is not affiliated with any political party. He has the “most detailed platform on transportation safety and efficiency”.
PLAN TO ADDRESS LARGER WARD – Double office staff. Create two teams, one north and one south of Danforth. Create a local constituency office.
DEVELOPMENT AND HOUSING – Inclusionary zoning to force developers to include affordable units in their new developments.
TRANSPORTATION (WOODBINE BIKE LANES) – Reform parking to increase traffic flow on Coxwell which will compensate for traffic and volume loss on Woodbine.
LOCAL ECONOMY (RESTAURANT PATIOS) – Adjust by-laws and restrictions that are unique to the Beach. Create “parklets” (convert existing parking spaces into retail and patio spaces).

Veronica Stephen
Through ten years of experience as a City of Toronto employee, Stephen said that she knows what it takes to move ward 19 forward. She aims for safer streets and better money management at city hall.
PLAN TO ADDRESS LARGER WARD – Choose individuals that are knowledgeable on the issues and delegate respective tasks to those individuals.
DEVELOPMENT AND HOUSING – Act on the plans created for affordable housing and remove financial barriers.
TRANSIT PRIORITY – Lobby government for more funding, eliminate wasteful spending.
STRATEGIES ON CRIME – Begin with community policing. Provide funding to support and restore programs and services for youth susceptible to crime.

ON SUPPORTING A CANDIDATE FOR MAYOR
Brenda MacDonald and Josh Makuch support John Tory. David Del Grande supports Jennifer Keesmaat. The rest of the candidates chose not to participate in the survey.

The registered candidates accepted an invitation to join the town hall meeting held by the Balmy Beach Residents Association (BBRA), Centre 55 and Beach Metro News. Questions were provided by attendees, readers and the Beach BIA. Candidates did not see the selected questions before the meeting, and select questions were drawn for candidates to answer by moderator John Cameron of the BBRA.