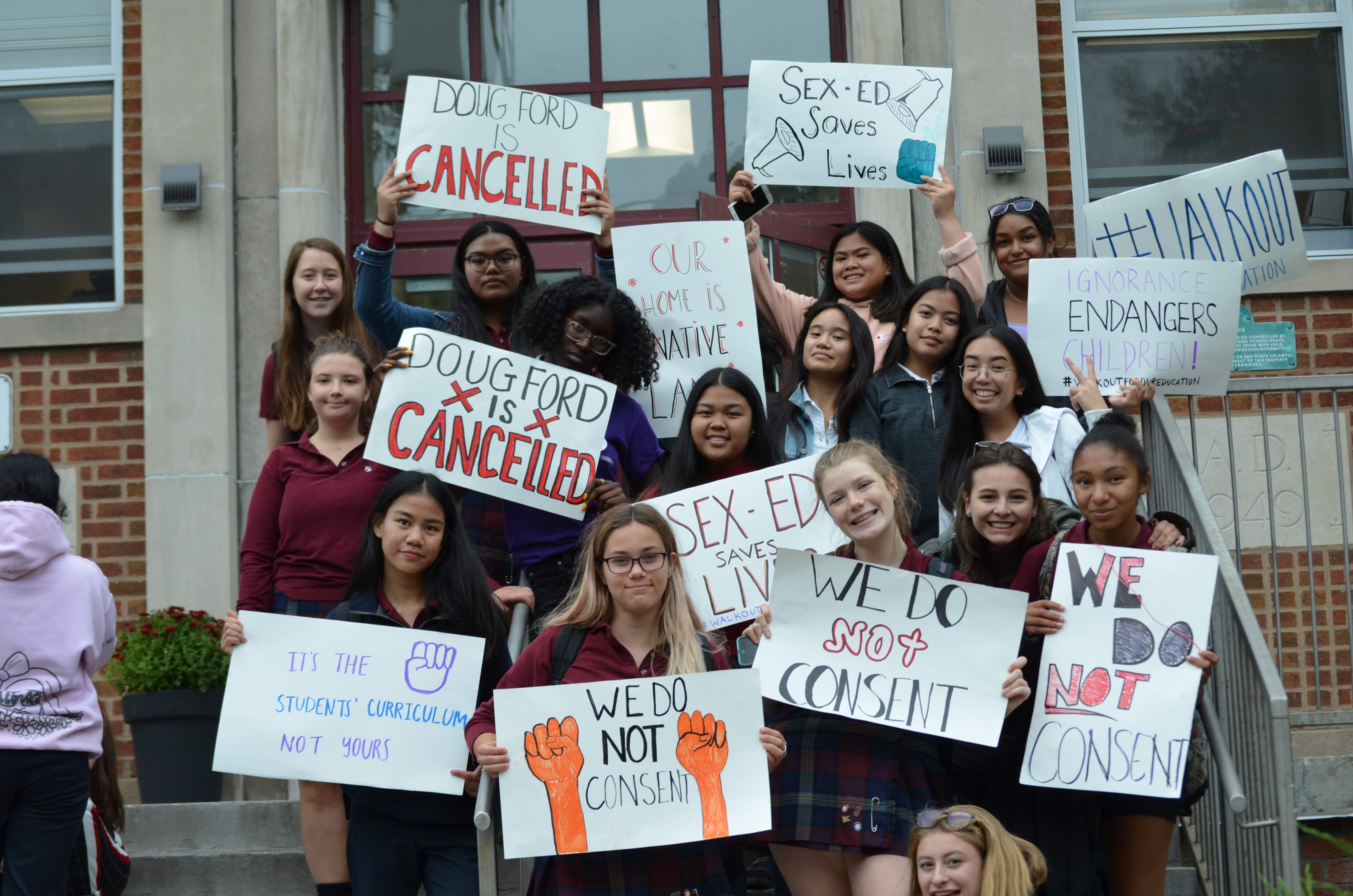 Students protesting the scrapping of a modernized sex-ed curriculum and a lack of Indigenous education walked out of class on September 20 and 21 to hold rallies across the province. Local students from Courcelette Public School, Malvern C. I., Riverdale C. I., and Notre Dame High School (in photo), and others, protested with signs and chants.

Students from Riverdale C. I. and Notre Dame contributed their own stories and photos:

Protesting students ‘do not consent’
By Hannah Found

On september 20 and 21, 2018 thousands of students across the province of Ontario walked out in protest of Premier Doug Ford’s wish to revert back to the 1998 health curriculum, which excludes mentions of sexual orientation, consent, and more.

Riverdale Collegiate Institute (RCI) students, were among the thousands that chose to take a stand.

Many made signs, chanted in unison, and made their own promises to fight for change. The resolve of the students did not go unnoticed. Cars honked as we protested from the sidewalks, and neighbours stopped to take pictures and cheer us on as we continued gathering for two hours outside the front doors of our school.

I spoke to many fellow students in the halls, many stating like myself that we were fighting back to make sure our younger siblings get the education they deserve and that most of us were lucky to have had.

The opportunity to be taught content that can determine our self-development, understanding and safety in a world with growing advances and risks should be mandatory.

Kids should feel included in their classroom, as we should be recognizing the widening perspectives and the diversity in our education that needs to continue to be worked on, not stripped away from us like you would a bandage off a paper cut.

Kids should feel safe in knowing that there are words for what they’re feeling, and who they are. We should be celebrating people of all sexual orientations, gender identities, race, religion, and we need to tell our children that they have the right to be heard.

We wore the purple along with an estimated 38,000 students who walked out of their classes that afternoon — a colour that represented what we were fighting for and what we will continue to fight for until our demands are heard.

Signs such as “1998 called. They want their curriculum back” were carried, while others used the now provincial wide phrase “We do not consent.”

Thousands of students were mobilized under the hash tag #WeTheStudentsDoNotConsent, showing their support to secure that the 2015 health curriculum stays.

The compassion and strength that was encompassed that day was something we all felt.

“One of the most incredible things for us to see at the walkout was how passionate RCI students were about the subject,” said Arianna Moodie, one of the organizers of the school’s walkout.

The students of Riverdale Collegiate Institute came together that afternoon, and it was more than anyone could have asked for.

Organizers thanked them all for coming out and showing their support, saying “We will stand up, as we have been doing, for as long as we need to.”

“No ignorance, no hate, don’t go back to ’98” — I lead Notre Dame students in this chant, when only three weeks earlier while scrolling through Instagram I had seen the first post on the Ontario Walkout account.

On Friday, September 21, students from about 90 different schools across Ontario participated in a provincial wide walkout to protest the recent changes to the curriculum which includes the reinstatement of the outdated 1998 sex education curriculum which eliminates from the discussion topics such as same-sex marriage, gender identity, the importance of consent, cyberbullying, and sexting.

The changes to curriculum also diminish the Truth and Reconciliation Commission’s efforts and a promise the federal government made to Indigenous people. This change halts the efforts to decolonize the education system in Ontario, including the incorporation of Indigenous knowledge and teachings.

“To have a qualified adult teach students the importance of these topics without bias is the point of school. Education opens discussions to what could be controversial topics in a safe space,” said Notre Dame student, Trisha Tolentino, 16.

“Out of respect for Indigenous peoples, Doug Ford must recognize that — in order for Canada to move forward towards reconciliation, Indigenous education should be mandatory for all students,” said 17-year-old Cresny Lorenzo, another Notre Dame student.

Two student groups, Decolonize Schools and March For Our Education, organized this particular series of walkouts. Beach schools, Malvern Collegiate Institute and Notre Dame High School, both kick-started this protest and held their school’s walkouts a day prior, on Thursday, September 20th, due to conflicting events.

As a grade 12 student at Notre Dame High School spearheading this rally, I already learned about my civic duty as a citizen, and how to exercise the legal right I have to protest. I am completely aware of the potential consequences for missing class, and I accepted it.

What was more difficult for me was how to effectively spread my message of solidarity throughout the rest of the school in a clear way.

Many students at Notre Dame were afraid of getting marked absent, missing lessons, or not being able to explain the issue to their parents. As the walkout ambassador for my school, it was up to me to ensure that students that were interested in participating were properly informed on the issue, knew their civic rights, and understood the schools procedure for unexplained absences. I made sure everyone walking out knew that they would not get in trouble for participating, and to inform their parents prior to the protest.

Despite the curriculum change not affecting the Toronto Catholic District School Board directly, this issue is important to me because it still affects someone.

I believe that if our education system fails even one student from what they should be learning in school, it fails us all. The students who participated in Notre Dame’s walkout stand in agreement. It is important that as a Catholic school we show our support for this cause, and to stand in solidarity with all the schools affected, regardless of our differences.

The protest that started on that Thursday continued at Queens Park on Sunday, September 23. Students in Ontario were invited to wear purple, bring signs, and sit-in at the legislative collectively. Protest leaders Rayne Fisher-Quann and Indygo Arscott were also present, along with many others from local schools participating in afternoon performances, speeches, and public civic action.

“Our generation is a generation of entrepreneurs and activists,” said Lorenzo. “We are engaged in politics, we are changing the world and we care. We are pushing society forwards while some adults are not doing that themselves. We will continue to advocate for education because it matters.”

The walkout represented students’ ability to take action and help empower others to do the same.

With an ever-evolving society, recognizing the importance of culture, politics and education matters, and the youth have the potential to be positive change agents in our growing society. This is an example of what is possible.