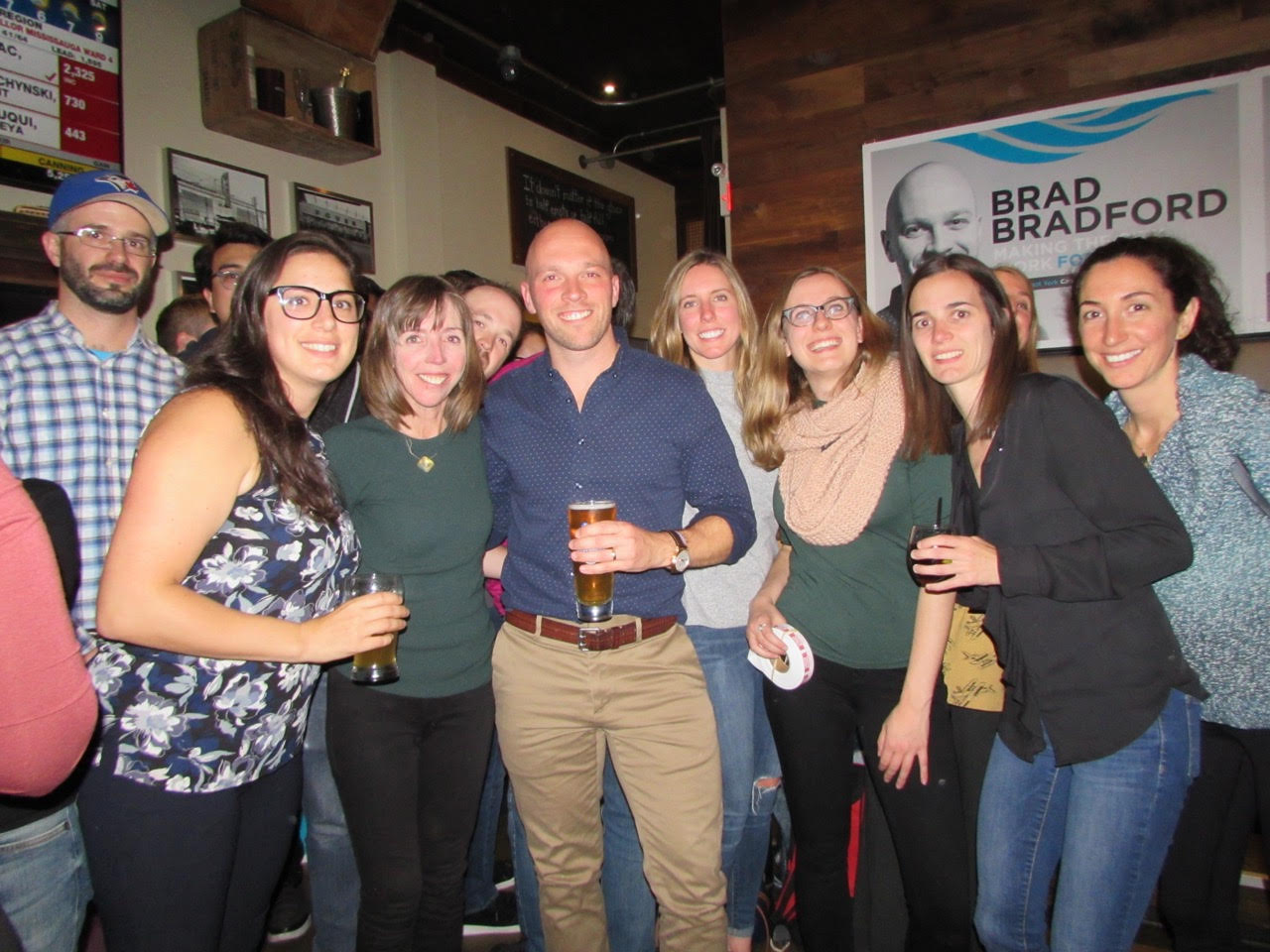 “Make us proud, Brad!” A supporter cheered, as he raised his pint glass above the boisterous crowd that came to celebrate Brad Bradford’s win at Local 1794 on the Danforth.

Bradford, an urban planner at the City of Toronto Chief Planner’s Office is celebrating his first foray into politics as Beaches—East York’s newly elected city councillor in the new 25-ward model system. He succeeds Mary Margaret McMahon, who voluntarily stepped down after serving a self-imposed limit of two terms. Having officially endorsed Bradford, McMahon was there to celebrate his win as well. “I am thrilled with Brad Bradford’s win and I think he will be great for our community,” McMahon said. “It was a refreshing election because we had the most civil all-candidates debates that I have ever seen or experienced,” she continued.

“Overwhelmed,” Brad Bradford said after clinching a win that came down to an extremely tight race –less than 300 votes – with former Beaches—East York MP and councillor candidate, Matthew Kellway.

The newly elected Ward 19 councillor attributed his success to the hard work of his campaign team. “I am just extremely grateful to this team. You can’t win a campaign without a team and the people who gave their time, their energy and their enthusiasm to this campaign. I am just totally inspired by that,” he said.

“I feel so honoured and privileged that the residents of Beaches—East York trusted me with this important position and I am more inspired and empowered than I ever was before to work as hard as possible to make this community even better,” Bradford said about his victory.

As for his first order of business, Bradford plans to touch base with local community groups, residents’ associations and people from “top to bottom” to set priorities on what needs to be done. “Certainly, that’s road safety, certainly that’s revitalizing our main streets and working together to come up with a plan to do that,” said Bradford.

“It was extremely emotional,” Bradford said, on his narrow victory over Kellway. “I would really like to work with him. He’s a very smart guy, a lot of great ideas and I certainly think we have a shared vision for the community,” he continued.

Over at Fox and the Fiddle on Danforth, the energy was electric as new and loyal supporters banded together in celebration of Paula Fletcher’s re-election.  The 15-year veteran was re-elected for the newly merged Ward 14, beating out her rival, friend and former colleague, Mary Fragedakis.

Cheers and applause could be heard throughout the 4000 sq. foot restaurant as the Toronto-Danforth incumbent stood on stage to thank the constituents and her team.

In true politician form, the new Ward 14 councillor galvanized the crowd with her speech on democracy and the Premier’s decision to shrink city council: ““I want you to know that we fought very hard and I will continue to fight for this city, for democracy in this city,” she said.

On stage, Fletcher reiterated her plan to continue to fight for Toronto amid the rapid series of provincial and municipal changes. “This has been the rockiest road and the craziest election I’ve ever had,” she said.

As for what’s ahead, Fletcher reassured her constituents that she will keep fighting to serve the Toronto—Danforth community. “This is going to be a difficult four years, many people told me that at the door. They’re very worried about what will happen to this city and I thank you for putting that trust in me to do the right thing at city council,” she said.