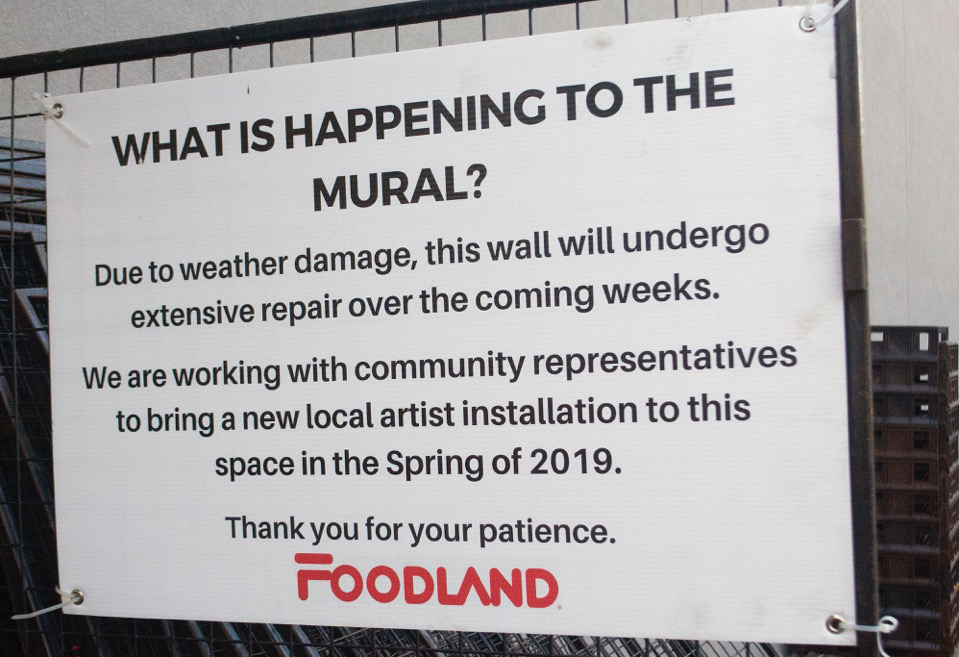 The mural on the wall of the Foodland store at Queen and Lee was removed due to cracks in the wall. Plans are in the works to replace it with another mural next spring.

The removal of a colourful mural located on the side of the Foodland store at Queen Street East and Lee Avenue has saddened community members.

The mural was removed due to significant cracks in the wall on which it was located, causing some flooding inside the store.

Sobeys Inc. (which owns Foodland) had engineers, real-estate teams, property development experts and others look at the wall to see what could be done as far as repairs. After quite a bit of deliberation, review and investigation, they determined the whole wall needed to be removed and re-built. The team of construction workers wasn’t able to save any part of the mural.

According to the Beach Village Business Improvement Area’s executive director, Anna Sebert, the old mural was a part of the neighbourhood for about 10 years.

The mural was created because the wall was getting tagged and according to lease agreements the property owner which was IGA was responsible for graffiti removal. The IGA teamed up with the Beach Village BIA, the local councillor at the time, the City of Toronto and a few other local businesses and residents in 2007 who all donated to pay artist Rudolf Stussi and his son Errol to paint the mural called Beach Got Rhythm “We are still really thankful for everybody that donated because that’s how the mural came to life in the first place,” Sebert said.

“It was definitely a community effort and the Beach Village BIA has high hopes that Sobeys will be able to create a new mural. We hope that it will be a great community asset like the last one was and we’re excited to see what happens.”

Many were sad to lose a part of the community’s history but as a result, the wall has been rebuilt and there is now room for another local artist to paint a fresh mural.

“Not being able to keep the mural is definitely unfortunate but being able to bring in a new community installation from another local artist will be a very exciting addition on that corner,” Sobeys media contact for the location, Jennifer McCrindle, said.

According to McCrindle, Sobeys community investment team will be working with a number of organizations to determine how they can partner with artists in the community to replace the mural with something new and what that might look like. The new local art installation will begin work in spring, 2019. McCrindle says cold weather, rain and snow are not conducive to an artist trying to paint a large, outdoor mural.

Foodland has put a sign up outside their store and let their employees know to answer any questions regarding the mural.