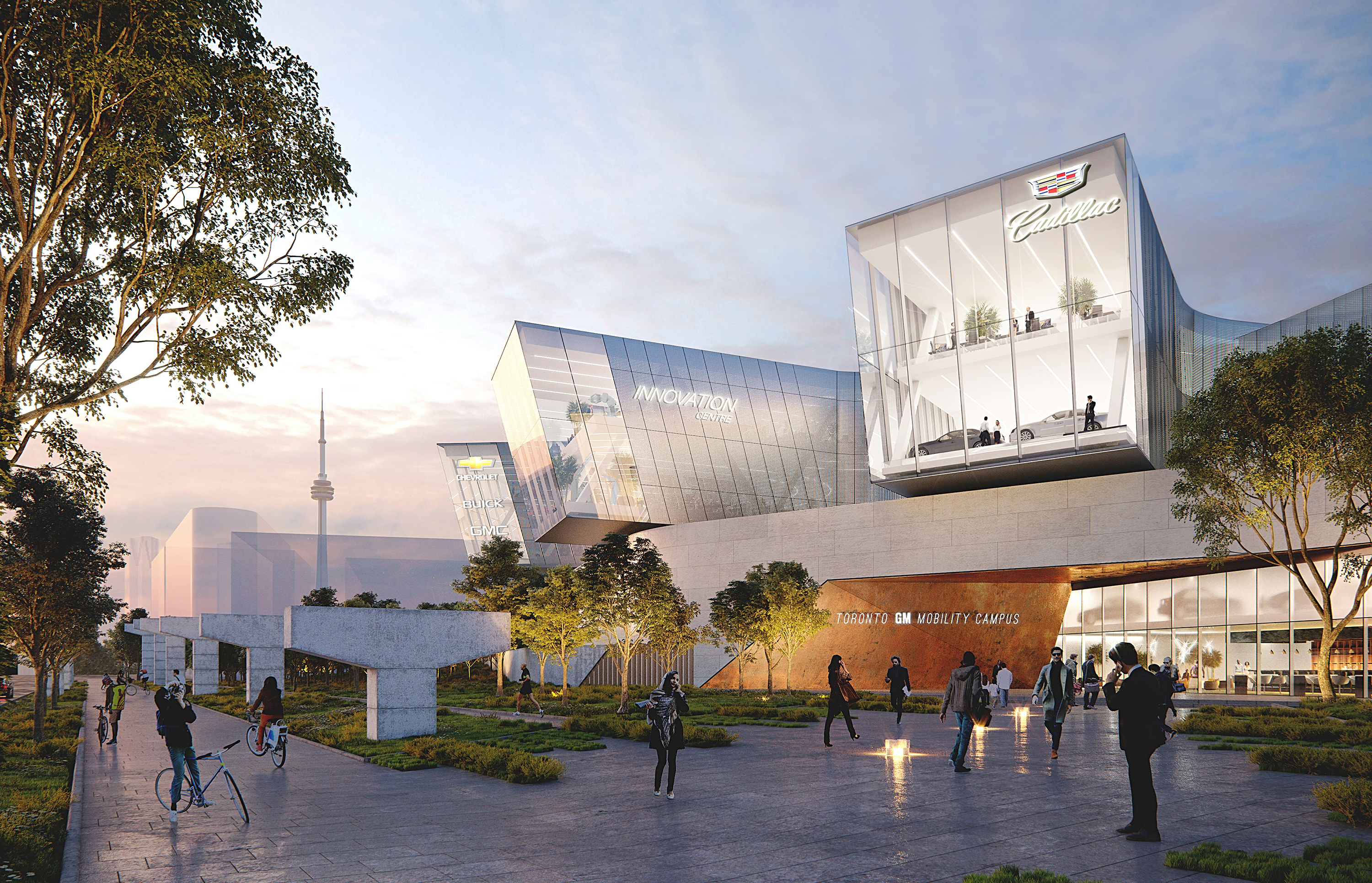 General Motors will soon begin work on its new seven-acre site, located at 721 Eastern Ave., and residents in the Port Lands area can expect to see major changes over the next few years.

GM has purchased a 99-year lease from the City of Toronto in order to build a Mobility Campus and Innovation Centre on the site formerly owned by Cinespace Film Studios.

“We really feel that this won’t be a traditional dealership. It will be something that represents something new, that represents some fresh thinking and really takes into account what we can possibly do,” said Mathew Palmer, director of 721 Eastern and special projects at General Motors Canada. The site, located on the south side of Eastern Avenue down to Lake Shore Boulevard East, is located midway between Larchmount and Rushbrooke avenues and has 170 metres of frontage along Eastern Avenue.

GM has put in a proposal for a new street that will extend Rushbrooke Avenue south to Lakeshore Boulevard East.

According to the City of Toronto’s final report on the development, the road will be 20-metres long with one travel lane in each direction. The final report was approved by council last summer.

In November 2017, Toronto City Planning staff hosted a community consultation where residents had an opportunity to learn about the new site and voice their concerns.

According to the final city report, resident concerns revolved around increased traffic volume and infiltration around Bruce Public School, pedestrian safety along the new proposed road and multi-use trail, retention of existing heritage buildings, sufficient parking space for new employees of the building, potential disturbance from excessive lighting and a desire to see more green spaces.

According to the city’s final report, the responses from this meeting were “used to assist in evaluating the application and to formulate appropriate by-law standards and conditions of draft plan approval.” The community can expect to see separated bike lanes on both directions of the Rushbrooke Avenue extension, with a planting strip on both sides of the street.

In an effort to mitigate traffic in residential areas, Rushbrooke Avenue north of Eastern will remain one-way northbound.

When the GM complex is fully developed, the community will have access to a new pedestrian plaza with local shops and cafés, starting from Berkshire Avenue and connecting to Lakeshore Boulevard.

This will result in improved pedestrian and cycling access to the Martin Goodman and Lower Don Recreation Trails.

There will be green spaces and trees throughout the site and continuing through the new pedestrian plaza. GM is also putting forward a $100,000 contribution to the Bruce Public School yard.

“We really envision somewhere that’s dynamic, that’s inviting to people to visit and really feel like they’re a part of what’s going on,” Palmer said.

Torontonians in the arts and culture scene are also expected see a boon to their industry when the site is complete.

As part of a deal with the city, 14,000 square feet in the north-west quadrant of the GM site will be allocated to the creative industry. GM is injecting $800,000 into the project to get it started.

With GM proposing that the new site will be their centre of excellence for innovation, the big question was, “How should the cultural centre intersect with technology?” said Pat Tobin, director of arts and culture services at the City of Toronto.

In early to mid-2019, the city will begin a proposal process for businesses and non-profits in the creative industries wishing to make the GM complex their new home.

According to the City of Toronto final report, the site will seek “creative industries and entrepreneurship uses and may include design, fashion incubators, technology start-up space, digital and screen-based organizations, music and sound recording, and other appropriate creative industry uses.”

As a homage to the former Cinespace studio, other film production studios are not invited to bid for space in the new complex.

Tobin said that Councillor Paula Fletcher was involved early in the development process. She has been conscious of the impact of rising rent and cost of living on the broad variety of creative people who support the film sector as well as their displacement from the studio district.

The new arts and cultural site is expected to expand the film sector and in turn create new opportunities for the creative community in Toronto.

“It’s a very good deal ultimately for residents in the ward,” Tobin said.

“Leslieville is a great part of the city that continues to grow and expand,” Palmer said of the Eastern Avenue location.
“The City of Toronto is a global leader in things like artificial intelligence and a lot of research and development, so it’s really a great opportunity to blend both being part of a community at a smaller level but also being able to really establish a base in a great city.”

Residents who have questions or concerns about the new development can contact Palmer at mathew.palmer@gm.com or visit the 721 Eastern project website at 721eastern.ca.