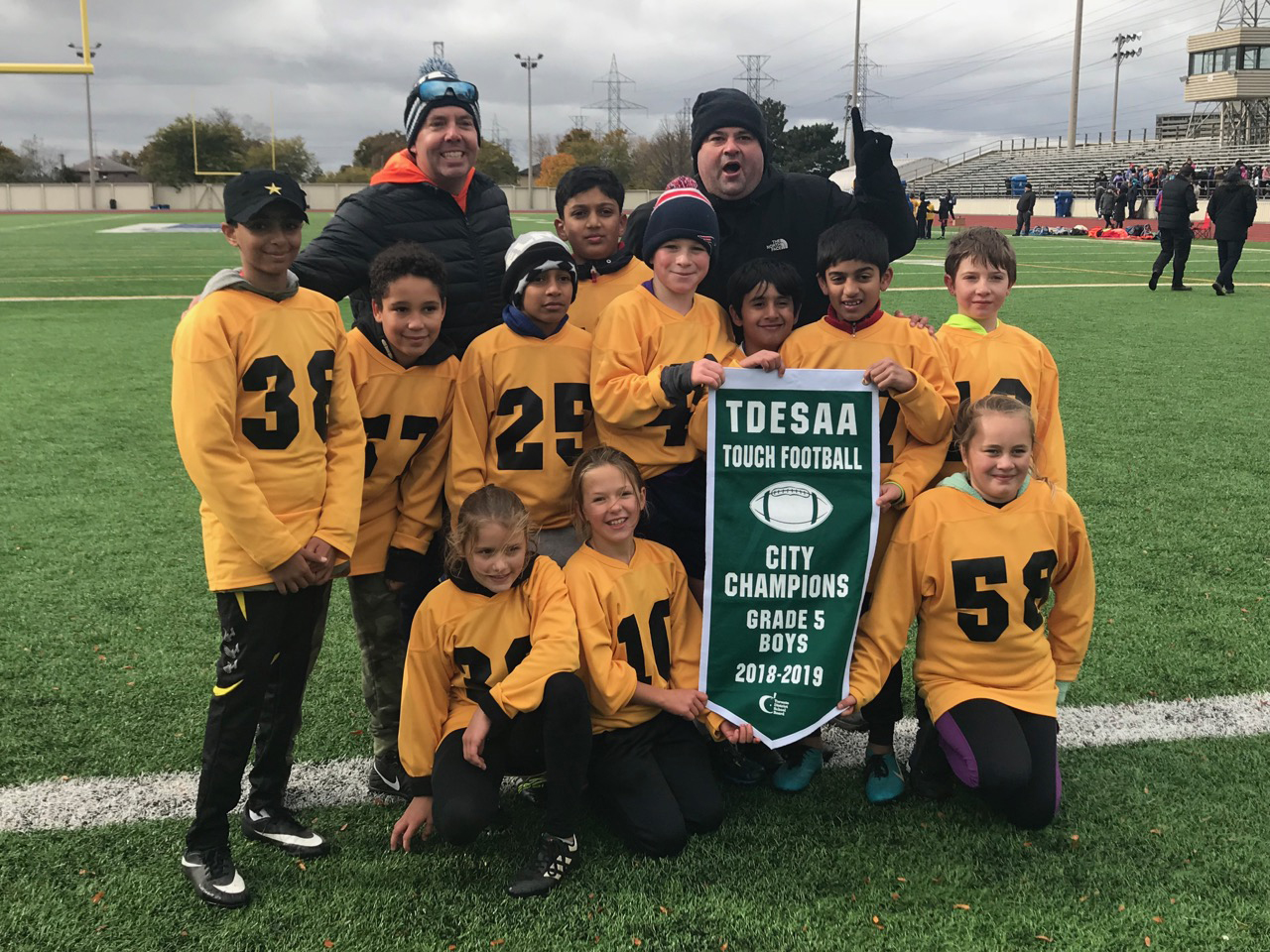 The Secord Elementary School Grade 5 touch football team made history and garnered national attention recently by winning the city championship in their sport.

It was the first city championship won by a school team in Secord’s 103-year history, and the fact that the team was made up of both boys and girls made the title extra special since they won in the boys division.

“It was amazing, we broke a streak longer than the Leafs, twice as long as the Leafs,” said Secord principal George Vlahos.

And even though they were playing touch football, not hockey, he said the team celebrated as if they had won a Stanley Cup.

The championship win was special on many levels for the Secord school community, said Vlahos, and news of it has spread across Canada thanks to media coverage by the CBC and the Globe and Mail.

“I’ve had emails from Sudbury and Victoria, B.C. congratulating us,” he said.

And just this week, the school received an autographed game football from Canadian Football League Commissioner Randy Ambrosie congratulating them on the win, said Vlahos.

The demographics of the school, the long championship drought, and the co-ed nature of the team (four girls and seven boys), and the excitement of the entire school community are what makes the feat so special, said Vlahos.

Because of its many portables, field condition and lack of space, Secord does not get to host a lot of sports events so fans of the school’s teams have few opportunities to watch them in action, nor do the players get to compete at home in front of friends and family.

So when Secord qualified for the Toronto District School Board elementary school Grade 5 boy’s touch football championship game at North York’s Esther Shiner Stadium on Oct. 29, Vlahos and the rest of the staff decided to make it a special event for players, fans and parents.

“We wanted to create a professional atmosphere for the kids,” said Vlahos. “Going to play at Esther Shiner was a big deal and so we organized it with the teachers and were able to send four buses and 160 kids up for the game.”

The fans on the buses were made up of six of the school’s Grade 4 and 5 classes, and some parents and siblings of players who otherwise would not have been able to make it up to North York for the game.

Vlahos said the fans had made banners and cheers for the team. “They were chanting ‘defence’ and ‘Secord’ and banging the stands, making lots of noise for our players. Winning the city championship was a bonus to what was already a great experience.”

Vlahos said everyone who was there will remember it for years to come. “You remember being cheered on and you remember being in the stands cheering for your school. That was what we wanted to create.”

Because of its large student population of 700 kids, Secord competes in the TDSB’s Division 1 against other schools with large populations. Many of those schools though have far more sports and athletic resources available in and around their communities for players on their teams, said Vlahos.

“We don’t play football out of the school. We have zero elite athlete programs running out of Secord, and we don’t have any sports camps at our schools.”

What they did have, though, was one seriously good touch football team.

And even though some may have felt having four girls on a team that played in an all-boys division was a challenge, it was quite the opposite. “Any myth that the girls couldn’t play elite sports with the boys; that was busted,” Vlahos said.

As for the championship game itself, it could not have finished on a more exciting note as Secord scored a touchdown in overtime to take the title with a 26-21 win over Keele Street Public School.

Elmaad Owais scored the winning touchdown for Secord in the overtime, and quarterback Jesse Saros led the team with four TD passes.

“It was amazing, the kids ran over to our fans after we scored and bowed to them,” remembered Vlahos of the game-winning celebration. “It was like we’d won the Stanley Cup.”