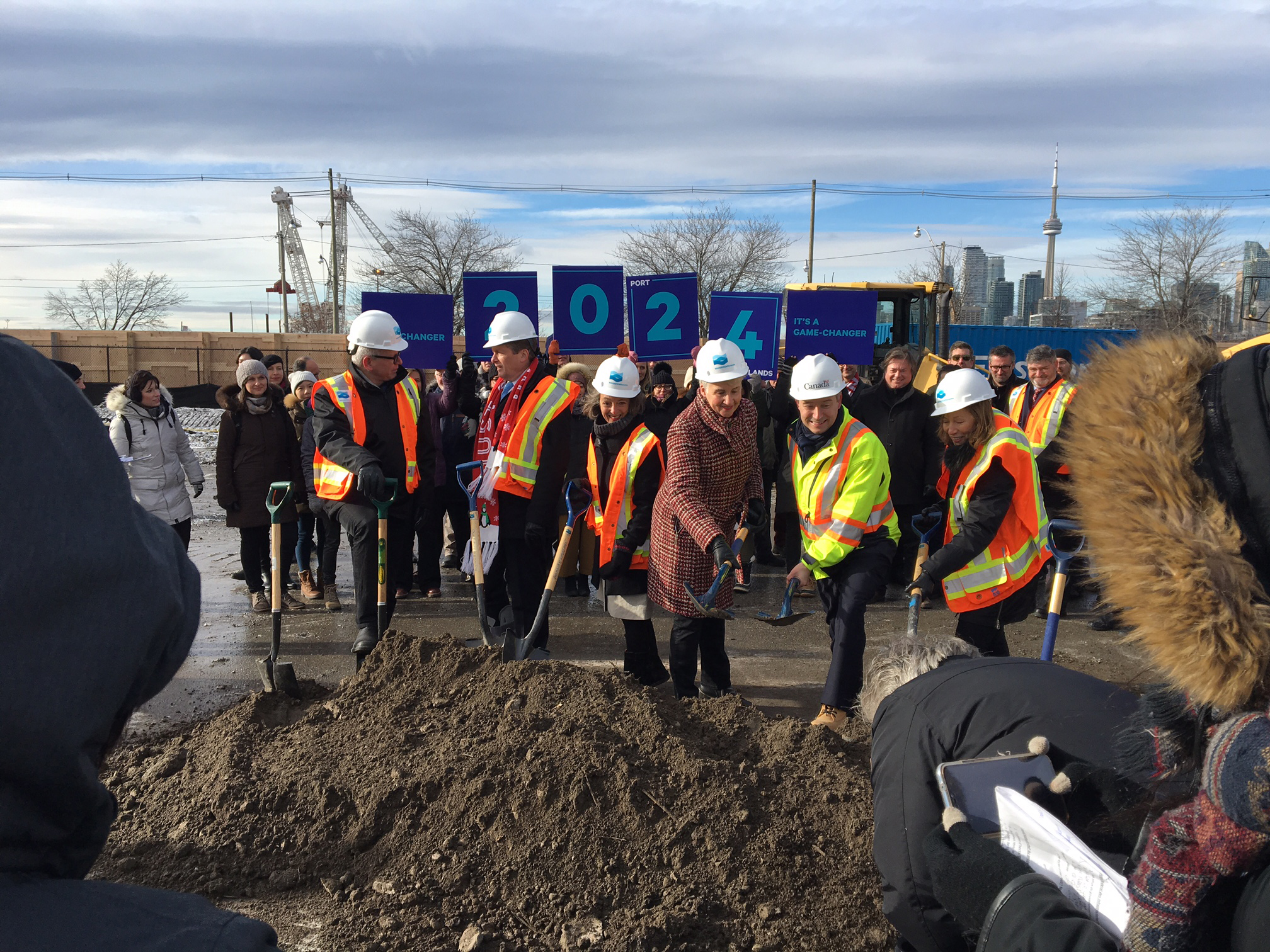 Toronto-Danforth Councillor Paula Fletcher (plaid coat) was among a number of dignitaries to take part in the groundbreaking ceremony for the Port Lands Flood Protection Project on Wednesday. Photo by Alan Shackleton

The transformation of east end Toronto’s waterfront began on a cold, windy Wednesday morning in the Port Lands.

A number of dignitaries were on hand for the official groundbreaking of the Port Lands Flood Protection Project that will redirect the mouth of the Don River directly into Lake Ontario and add hundreds of acres of new parkland, wetlands, housing and commercial space to an area that was formerly home to heavy industry.

“This is very exciting and we’ve been waiting for this for a long time,” said Toronto-Danforth Councillor Paula Fletcher after the ceremonies held on a barren, wind-swept plot of concrete-covered land south of Commissioners Street, between Cherry Street and the Don Roadway.

By 2024, it’s expected that the site will be unrecognizable from what it is today as the course of the Don River will be basically dug through a one-kilometre portion of the site, creating a river valley, wetlands at the mouth of the river and a new island to be known as Villiers Island that will provide housing and economic opportunities for thousands.

Officials from the federal government, the City of Toronto, Waterfront Toronto, and the Mississaugas of New Credit First Nation were on-hand for the Nov. 28 groundbreaking of the $1.25-billion project. Notably absent were any representatives of the provincial government.

“I’m disappointed the Ontario government did not come,” said Fletcher. “They are an important part of this.”

Funding for the project is split three ways between the federal, provincial and city government – with each committing more than $416 million.

While flood protection is a critical portion of the project, so are the housing, employment and recreational portions.

“This is 75 acres of parkland by the river with recreational trails and natural areas,” said Fletcher. “It’s also 25 acres of housing, and 30 per cent of that has to be affordable housing. It will be a benefit to our city over a long number of years.”

The flood protection project launched Wednesday is all part of the massive revitalization plan for Toronto’s eastern waterfront, and it will be one of the largest construction projects presently taking place in North America. It is expected to be completed by 2024. Some 1.4 million cubic metres of soil and fill will be dug up as part of the project, that’s approximately 180,000 dump trucks worth. To create the wetlands and new shoreline at the mouth of the Don’s new course will require more than 195,000 cubic metres of clean fill and another 182,000 metric tons of locally sourced aggregates. Also, more than 1.2 million seeds will be planted to create new habitats along the river valley.

Construction work actually began in July of this year with the clearing of the land between the Keating Channel and the Ship Channel in preparation for the digging of the new river course which starts this winter.

The official preparation for this project goes back more than 10 years, Fletcher said, with the start of the Environmental Assessment process in 2007.

However, the inspiration for revitalizing the mouth of the Don River and the Port Lands area goes back decades, she added.

“This goes all the way back to 1986 and Bring Back The Don. The focus is on the river and the river is at the centre of this and it is going back to a more natural course.”