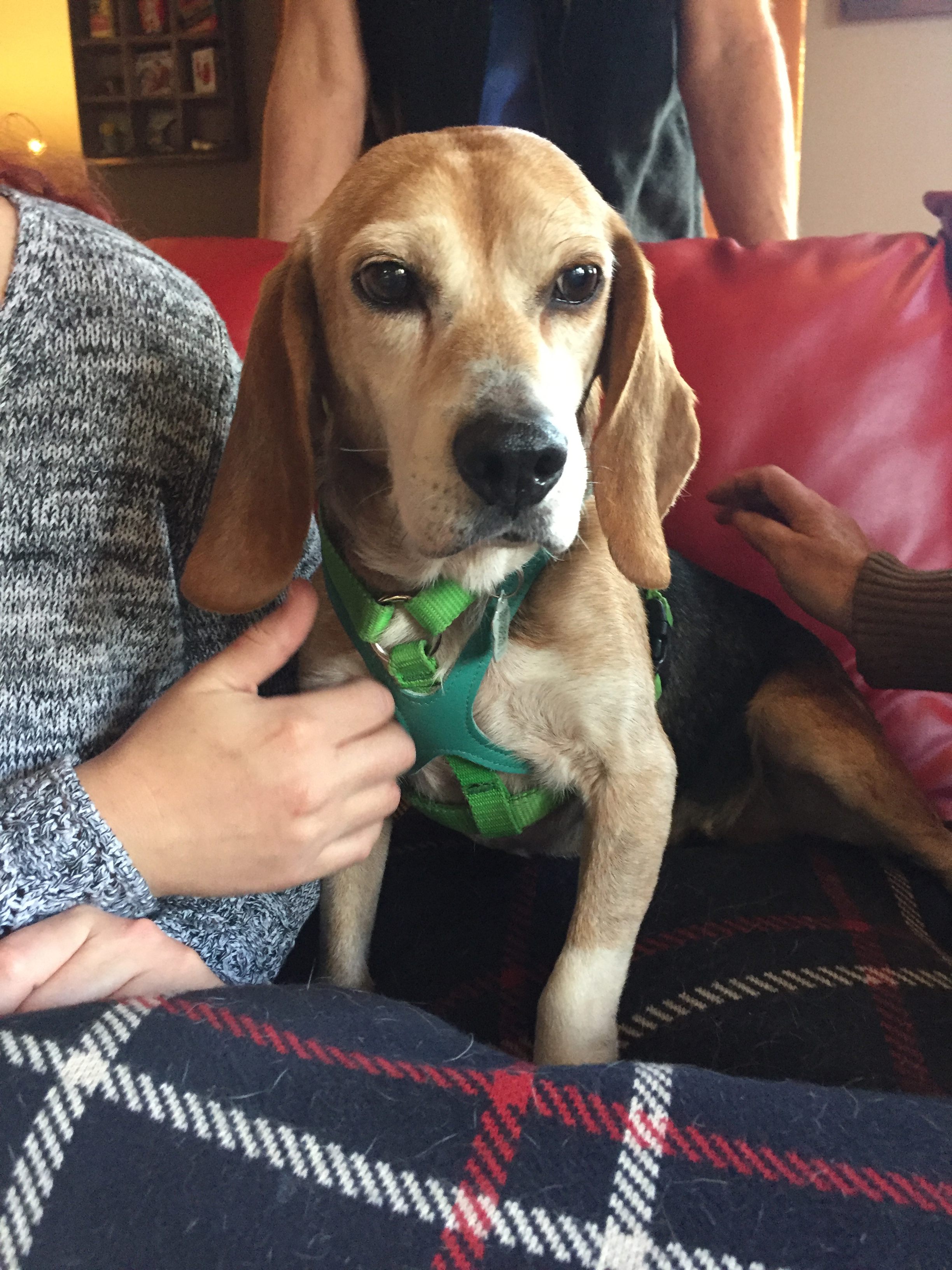 Norman, an approximately 11-year-old beagle, is the Pet of the Month.

This is Norman. He was a collaborative effort. Two dog rescue groups raising him up so he can stand on mountains! All that up-raising (including cutie pie posts on Instagram!) has resulted in an impressive fan club, a wardrobe to die for, and too many toys to mention…even if he doesn’t quite understand what he’s supposed to do with them.

No matter, Norman has a promising future in shipping and handling which will become crystal clear by the end of this article.

Norman was a stray so his real past remains a mystery. But that never stops us from making one up!  BOB Grad Violet was a beauty school drop-out in her previous life, Wesley was a poor yet perfect farm boy, and Laura-Bell was a country crooner from Kentucky! Stay tuned for Norman’s pretend past!

Must stop straying from the story! Norman sought refuge at an animal shelter in Hamilton by late summer. Adorable as he is, Norman didn’t fit the criteria for general adoption. He’s old, for starters. He also has a mouthful of yucky teeth requiring restorative work at the very least or, a total Demo Day at the dentist – worse case scenario. He’s definitely going to lose some Chiclets! Lastly, Norman is sporting the lumps and bumps of a beagle past his prime. Luckily, all lumps appear to be sublimely benign!

Aside from the health issues, Norman has confidence issues. He’s painfully shy with only his tail to support him. It never stops wagging. It’s a hopeful tail and he’s always hoping for the best.

The shelter contacted Speaking of Dogs Rescue (“SOD”) about Norman and that’s when things started looking up for our senior pup! I’ve written about this awesome all-breed rescue organization before. In fact, the founder of SOD, Lorraine Houston, is my mentor. Indeed, she is to blame for getting me into the whacky world of animal rescue. About a thousand years ago, she twisted my arm about appearing in her Rescue Directory under “Beagle”. I wasn’t official back then, but she knew I’d already come to the rescue of a few homeless howlers. She figured I could act as Guidance Counsellor to owners at the end of their leash. I founded Big On Beagles (BOB) Rescue shortly after that. I’m a lifer now, lucky for Norman.

Over the years, SOD has helped this little beagle repair shop grow. Lorraine has always been there with sage advice and she saved the day a few times when our foster homes were full. With Norman, I was finally able to return the favour.

Norman was gradually building confidence in his fabulous foster home with SOD. He’d grown quite attached to their two dogs. He was also coming into his own as an authentic beagle! In other words, his expert nose soon led him to the kitchen cupboards and the wonders waiting within! He especially loved pulling out packages of flour and pasta! Yes, brown paper packages tied up with string are a few of Norman’s favourite things! Dog toys will suffice, however, if caught with paws in flour. He’s easily re-directed. As long as he can take something and run with it, being the best darn courier on four paws that he is, Norman is delighted.

It wasn’t his passion for the pantry that brought him our way. Rest assured his foster family loved him despite the Beagle Prime Directive. Sadly, it was a sudden family emergency that changed his course. Foster mom had to fly home when her elderly father became seriously ill. With no idea when she’d return, alternate arrangements had to be made for Norman. He had been doing so well under her loving care. He needed someone just as special to replace her.

Lorraine called us. I’m so glad she did. It may not have seemed like the best timing, but the stars aligned nonetheless.

We were preparing for our 13th Annual BEAGLE BASH FOR CASH. We needed it to be a success. We’ve had a tough year. Costly medical emergencies have taken a toll on our bank account. We’d also just said goodbye to one very special beagle. I featured Little Mac for my column promoting last year’s BASH. He’d been abandoned in an apartment suffering from a severe flea infestation that left him fur-less from the waist down. Little did we know, clearing up his skin and growing back his fur would be the least of our worries. Little Mac was diagnosed with bone cancer this summer. It was a very difficult goodbye for all of us, but especially for my rescue partner Deanna and her husband Andrew who fostered and fell in love with their Big Mac.

It had been less than a week since Mac left us. Much too soon to suggest another little beagle take his spot on the couch but there was something about Norman…

It’s been a month now since Norman moved in with Deanna and Andrew. Last I heard he alternates between 3 spiffy outfits. His “frat boy” sweater is the cutest! Norman shares his home with two other beagles and about a million toys. Deanna is convinced he worked for UPS in a previous life! He loves to transport toys to other regions of the house. If you clock him, you’d be impressed with his delivery time. If it absolutely must get there overnight, he’s your guy! He’ll transport any toy any time but he especially loves transporting the chicken with the blue pants. Interestingly enough, the chicken with the blue pants was Little Mac’s favourite.

This holiday season, we’re celebrating Norman and the teamwork that made Norman happen. Maybe you’d like to join us? Do you have a favourite animal rescue organization? Consider a donation to them in your name or as a gift to a fellow animal lover! And remember – there’s no such thing as a small donation. If it’s enough to buy a stuffed toy chicken with blue pants, it’s enough…take it from Norman.

Norman is an approximately 11-year-old beagle making daily deliveries at Big On Beagles (BOB) Rescue, www.bigonbeagles.ca , facebook.com/BigonBeaglesRescue! Big thanks to Norman’s original rescue team at Speaking of Dogs for saving him first and allowing us to be his lucky seconds!