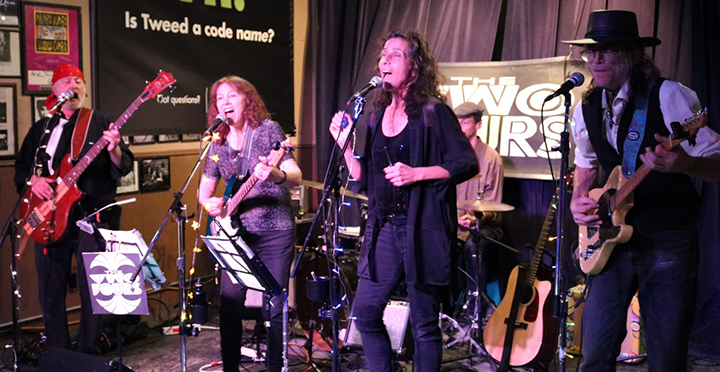 The New Year’s Eve festivities, including dancing, continue until the wee hours at Hi-Lo, 753 Queen St. E. just east of Broadview Avenue, with a DJ following the band. There is no cover charge, and guests are welcome to bring in their own food. Local take-out establishments abound.

Based in the Beaches neighbourhood, The Two Fours, according to co-founder and bassist Wally Hucker, are “world famous all over several east Toronto neighbourhoods, and parts of Scarborough, Etobicoke, and Durham County.” Other members of what they call “the core four” up front are Karen Gold, guitar; Susan Litchen, flute and guitar; and co-founder Corey Cousineau, on lead guitar. All the core four sing lead and harmony vocals.

On New Year’s Eve, they will be backed by stellar drummer Paul Brennan, himself an honourary east-ender by virtue of his regular Sunday night open mic hosting at Relish Bar & Grill on Danforth Avenue.

The five first played together last June at Saulter Street Brewery during the Riverside Eats & Beats Streetfest. Subsequently, they have played together at Balmy Beach Club, Taste of the Woods, the Wheels On The Danforth festival, Kew Gardens, Gastro Pub, Leslieville Farmers’ Market, Tara Inn, and many other venues.

The Two Fours next play publicly on Jan. 12, at the Black Swan Tavern, on Danforth Avenue just east of Broadview Avenue.