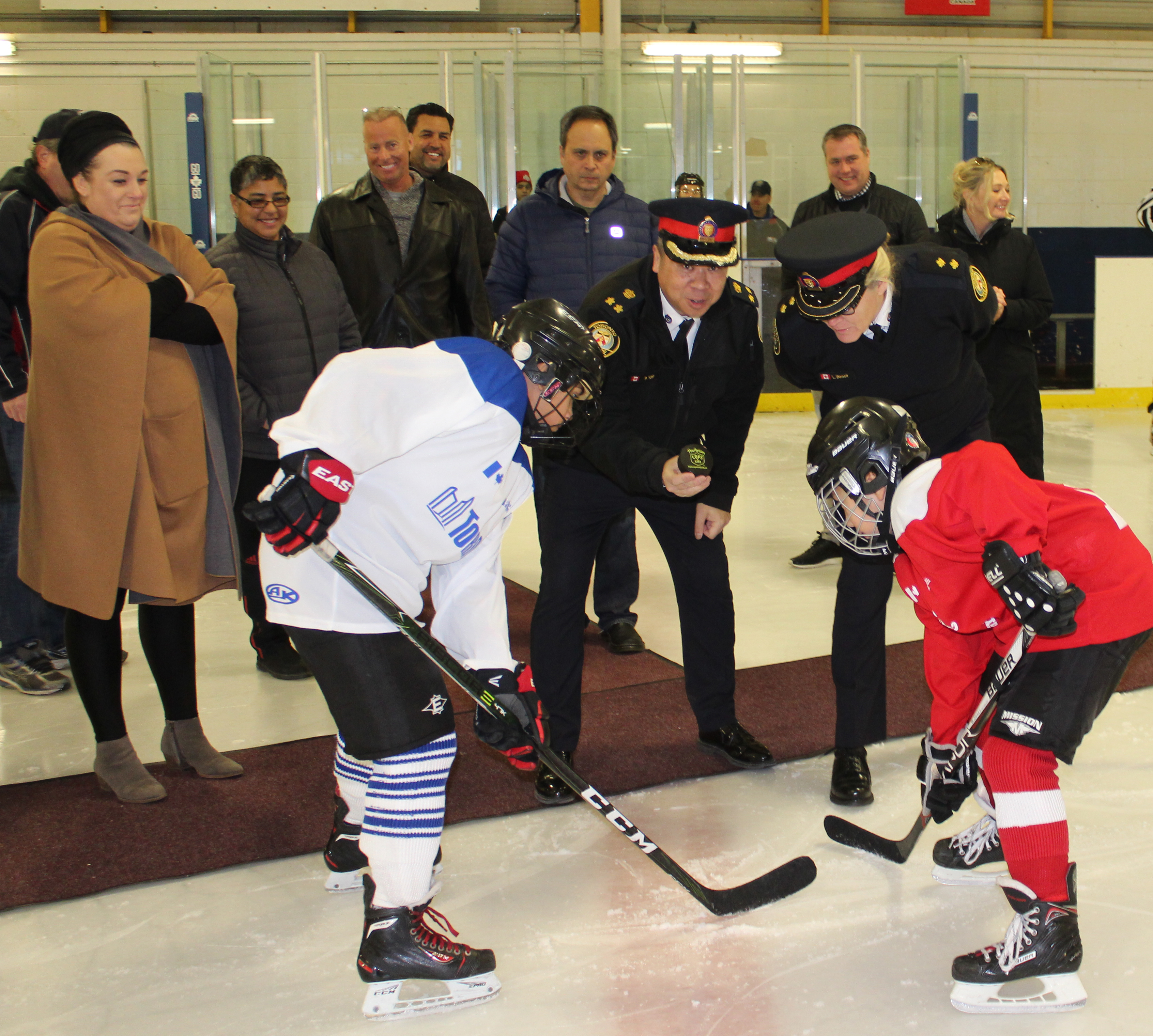 Toronto police Deputy Chief Peter Yuen prepares to drop the puck at the opening faceoff of the ProAction Hockey League’s 10th season at Angela James Arena. The league sees police officers from 55 Division coach and mentor young hockey players in the community. On hand for the opening faceoff were a number of dignitaries including Hockey Hall of Fame member Angela James, league volunteer Aishah Sherri and Inspector Liz Benoit of 55 Division.

The Pro Action Hockey League recently celebrated its 10th anniversary of providing sports opportunities for kids along with building positive relationships between police officers and the community.

The program began with police officers from 54 Division in East York, serving youngsters in the communities of Thorncliffe Park and Flemingdon Park, and runs out of the Angela James Arena in the Don Mills Road and Gateway Boulevard area.

With the amalgamation of Toronto police’s 54 and 55 Divisions recently, the program is now an initiative of 55 Division’s Community Response Unit.

A celebration was held on the afternoon of Sunday, Jan. 13, to celebrate both the league’s 10th anniversary and the beginning of a new season of hockey for the almost 150 youngsters taking part.

Back when the league first began, there were 64 kids involved – all of them boys. For this season, more than half of the young hockey players are girls.

Constable Chris Black, of 55 Division’s Neighbourhood Safety Unit, has been with the league from the start.

The police officers involved give of their time to coach and mentor the youngsters in learning hockey skills, and then help them put those skills into action by organizing into teams and playing games in the league.

“It builds communication and friendships, and humanizes us to them,” said Black. “They see us as people and not just a uniform, and it helps us to become part of the community. And at the end of the day, it’s fun for the kids.”

Fun was certainly the top item on the agenda Sunday as players from two of the league’s teams took part in special opening celebrations at centre ice which included speeches and an opening face-off ceremony.

Those speaking at the opening ceremonies included Angela James, who the arena is named after. James, who is a member of the Hockey Hall of Fame, grew up in the area near the rink and is an inspiration to many of the young hockey players, especially girls, who live in the neighbourhood.

James is considered one of the key players in the development of women’s hockey in Canada. She was one of the first two women inducted into the Hockey Hall of Fame in 2010.

Black said the support of the community is one of the key reasons why the Pro Action Hockey League has been so successful, and he said the work of local teacher Aishah Sherri and Adil Patel, of the Friends of Flemingdon Park, were especially important.

“It’s a community made up of a lot of new immigrants and many of them had no experience at all with hockey,” remembered Black of when the program started.

As a kid, Black himself played hockey in the Don Mills area and he’s happy to be giving back to the game and local kids.

“The kids and their parents are just amazing. They’re great to deal with and it’s just so much fun.”

He said Sherri and Patel let the kids, and their parents, know that the Pro Action league was a way for the youngsters to learn how to play hockey without having to pay for the high cost of equipment and ice rentals.

Sponsors that support the league include Pro Action itself, which is a non-profit agency that provides funding for programs that connect police officers with young people, Bauer, Volvo, Canadian Tire Jumpstart, the City of Toronto and the Victoria Park Minor Hockey Association.

Sherri, who teaches at Valley Park Middle School in Thorncliffe Park, has been with the league from the beginning. She was hockey mom of one of the boys who took part in the first year of the league, and has stayed to volunteer her time ever since.

Since she was teacher in the community, she was able to help youngsters know about the league when it first started and she continues to do so.

“When they started one of the officers said to me that they needed someone in the community to volunteer and help make the league work,” Sherri remembered.

She said many of the first-generation families in the community had no history with playing hockey themselves so it was not the first sport they would have expected their own children to play. Also, the high costs were also a challenge for families that might have wanted their children to be involved.

“We had to teach them a bit about the sport and the love for hockey in Canada,” she remembered.

That love for the game was certainly evident in the faces of the young players on the ice on Sunday, and that’s a pleasure for Sherri to see. And she’s especially happy to see so many girls taking part.

“More than 50 per cent of the players are girls this year and that is so great,” she said.

Along with the sports opportunity, Sherri said the relationship being built between young people and local police is especially important. “The kids get to see them outside of their professional capacity and that helps build good relationships. There are so many positive results from it.”