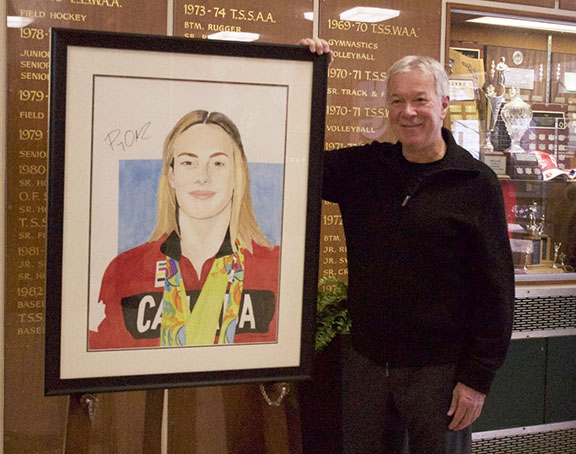 Monarch Park Collegiate has unveiled a portrait of one of its most famous students on Tuesday. The watercolour painting displayed 18-year-old Olympic champion Penny Oleksiak.

Oleksiak is a competitive swimmer specializing in freestyle and butterfly events. She won four medals in the 2016 Rio de Janeiro Olympic Games, and became the first athlete born in the 2000s to achieve an Olympic gold medal in an individual event.

Her Olympic medals consisted of a gold in the 100-metre freestyle, a silver in the 100m butterfly, and two bronzes in the women’s freestyle relays. She was a student at Monarch Park Collegiate during the time of the Games in Brazil.

To commemorate her victory, Canadian artist Jeffrey Sprang created a painting of Oleksiak proudly wearing her medals from the Rio Olympics.

Sprang explained that there are also 100 prints of the portrait available for sale. The prints are signed by both Sprang and Oleksiak and are being sold for $200 each.

“I am so pleased with how this turned out,” Sprang said at the unveiling ceremony held on Jan. 15 at the school. “I hope that people will view this as a commemorative piece because it really is something quite unique and special.”

The proceeds from the painting will be going to swim programs at three different schools across Toronto. These schools include Monarch Park, Carleton Village, and Sunny View.

“Penny would come to our fitness class and work her absolute heart out,” McAlpine said. “When she touched that wall at the end and made this nation proud, that was the result of her hard work.”

Students from the school’s swim team also spoke about Oleksiak, praising her for how much training she would do before the Olympics. Others also spoke about her kindness towards others, and the way she would help time the other swimmers as they practiced.

Monarch Park’s principal, Virginia Pang, added that having Oleksiak’s painting displayed will help to inspire other students as well.

“She will continue to grace our school, and hopefully we’ll have another Olympian in the works,” Pang said.

Oleksiak’s portrait will be put in a display case and set up in the halls near the swimming pool entrance, where students and members of the community can view it before they swim.