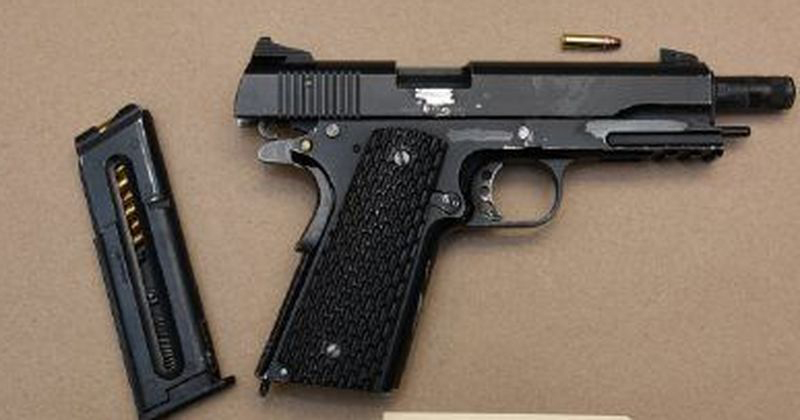 This image released by Toronto police shows one of the handguns recovered by officers after a shooting on Jan. 6 at Woodbine and Kingston that injured two men. Photo by Toronto Police Service.

A local resident is hoping to make it easier for area residents who wish to sign a national petition calling for the federal government to implement a ban on the civilian ownership of handguns and military assault weapons.

The petition is being sponsored by a Toronto MP, Julie Dzerowicz of Davenport.

Birch Cliff resident Patricia Gresham said she was inspired to try and get more signatures on the petition in the wake of the shooting that took place on a Sunday afternoon earlier this month at Woodbine Avenue and Kingston Road and by subsequent stories about it in the Beach Metro News.

Two men suffered non-life threatening injuries in that shooting which took place in the busy intersection at about 2:30 p.m. on Jan. 6.

A column in the Jan. 8 edition of the Beach Metro News said people should not only be outraged about the dangerous use of guns by criminals on our streets, but that residents should also be pushing politicians at all levels to do something about it.

To that end, Gresham decided to see what she could do to make a difference and discovered Dzerowicz’s petition.

She went online to sign it, and said she found the process fairly complex and is worried that people without a lot of computer skills or confidence might be unable to access it and let their feelings on the issue be known.

“I’m worried the petition is losing a whole demographic of seniors who can’t navigate the petition online,” Gresham said.

So, to make it easier for those who wish to sign it, Gresham was able to get a printed copy of the petition made and she has been distributing it to locations around the community for people to sign. Those locations include a number of local churches such as St. Nicholas Anglican Church in Birch Cliff, at 1512 Kingston Rd., and the Church of St. Aidan in the Beach at 70 Silver Birch Ave.

A copy of the petition is also available at the Beach Metro News office at 2196 Gerrard St. E., just west of Main Street.

Gresham said residents wishing to sign the petition need to do so sooner rather than later, as it will be presented to the House of Commons by Dzerowicz on March 2 and the last day to sign a print version of it is Feb. 20. She said she can be contacted at pgresham@sympatico.ca by those wishing hard copies of the petition.

For those who wish to sign the petition through the online process, it can be accessed at petitions.ourcommons.ca and it is number E-1923. The deadline for signing online is 2:26 p.m. on March 2.