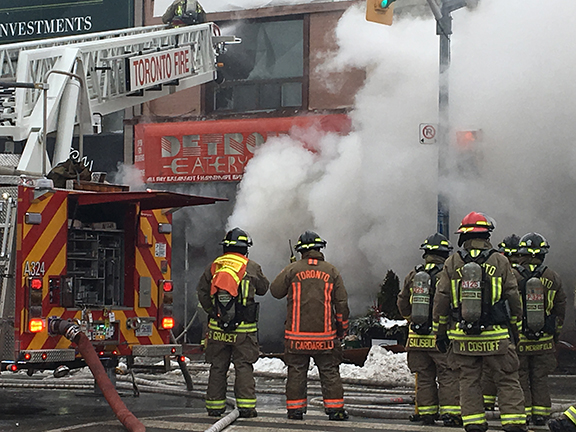 Smoke pours from the Detroit Eatery on Danforth Avenue at Chester Avenue on Tuesday, Jan. 22, morning. Photo by Alan Shackleton.

Toronto fire crews were continuing to deal with a fire at the well-known Detroit Eatery on Danforth Avenue at Chester Avenue Tuesday morning.

The four-alarm fire is believed to have started in the basement of the popular diner which has been an institution in the area for more than 20 years.

There are not believed to have been any injuries in the fire, which started at approximately 6:45 a.m. on Tuesday, Jan. 22.

Danforth Avenue is closed between Broadview and Logan avenues while fire crews deal with the fire, which has caused heavy smoke in the area and also impacted the business on the second floor of the building above the Detroit Eatery.

Toronto Fire Commander Greg Weeks said the cold weather was causing challenges for firefighters who had to deal with frozen hose lines, and water control issues from their ladder truck which was hosing down the building’s second floor. Weeks said fire crews were being rotated in and out on a regular basis due to the freezing temperatures.

A Go Fund Me page has already been set up in the community to help the owners of the Detroit Eatery. It can be reached at www.gofundme.com/help-restore-detroit-eatery