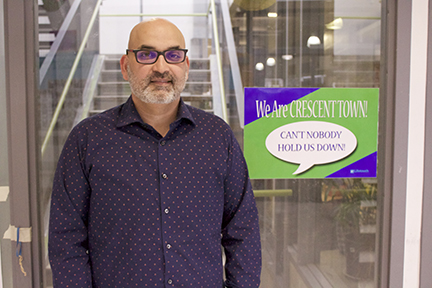 Harpreet Ghuman, principal of Crescent Town Elementary School, has been named one of Canada's Outstanding Principals for 2019 by The Learning Partnership. Photo by Kasy Pertab.

Harpreet Ghuman, principal of Crescent Town Elementary School, has been recognized as one of Canada’s Outstanding Principals for 2019.

He was one of 30 principals across the country recognized by The Learning Partnership. In its 15th year, the Canada’s Outstanding Principals program recognizes the extraordinary contributions of school principals.

Principals who are considered for the honour are nominated by parents, colleagues and community members. They will also be recognized publicly at the awards gala reception on Tuesday, Feb. 26.

Ghuman said he is grateful for the recognition, especially since he is not someone who seeks a reward for the work he has done.

He also added that as a student, he had trouble discovering his identity in his education. After migrating from India in the late 1980s, Ghuman said he struggled to find where he belonged.

“I think that’s what drives me to work with students, teachers, and families too, so they can reclaim and remember who they are,” Ghuman said.

He admitted that this sense of finding one’s identity was what motivated him to become a teacher.

Ghuman added that in his position, he frequently instills this philosophy into his students so that their heritage is not forgotten.

“When I was a kid, I had to learn a whole new language and way of learning,” he said. “The difference is now we’re able to support students to not forget their roots, but to really honour their roots in the classrooms with their languages, history, and cultures.”

Ghuman’s teachings contain a variety of lessons for his students. His topics range from identity, nationalism, what it means to be Canadian, to recognizing different faiths and even tackling the subject of Islamophobia.

Ghuman also said that he tends to be an advocate for student voices at the school which is located in the Crescent Town neighbourhood of apartment buildings on the west side of Victoria Park Avenue north of Danforth Avenue.

When asked how he felt about achieving the award, he admitted he is most happy for his parents. Ghuman explained that his parents left their life behind in India, and were faced with cultural and ethnic isolation for several years. Their struggle to conform was just as difficult as his.

However, Ghuman knew that it was all for a reason.

“I know that their one purpose of coming to Canada was for myself and my siblings to get an education,” he said. “So to me, this is really for my parents.”

The Crescent Town principal described how parents of his students constantly share their gratitude with him, especially since many of them are immigrants as well.

Sharing the knowledge of diversity within Canada’s education is extremely important to Ghuman, and being a principal is his way of doing just that.

The winning principals will be recognized publicly at an awards gala reception on Tuesday, Feb. 26 in Toronto.