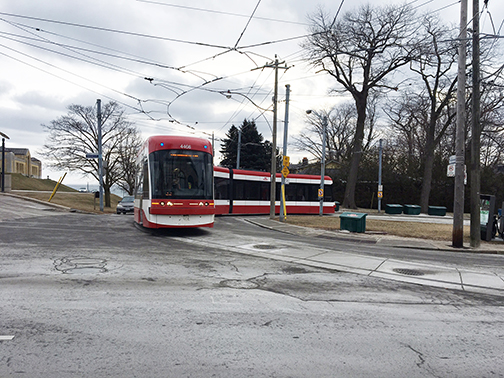 As the new Bombardier streetcars come into wider use across the city, new problems are arising on Beach roads.

The Neville Park streetcar loop is located on the southwest corner of Queen Street East and Nursewood Road where streetcars enter eastbound and loop around to exit onto the westbound route.

However, with the new streetcars being significantly longer, their route change takes a bit more time. This causes drivers in cars that are attempting to pass streetcars waiting to enter the loop to become impatient, and they end up holding up traffic while trying to squeeze by.

Although the loop’s traffic jam has been an ongoing problem for some time, the new streetcars didn’t help the cause, said Alan Burke, president of the East Beach Residents Association.

He explained that since there are parking restrictions for the Neville Park loop area, passing cars are forced to go in the opposite direction of traffic to pass the streetcars.

He also said that near to the Neville loop location is the R.C. Harris Water Treatment Plant at the foot of Victoria Park Avenue and there are water pumps installed beneath the loop, making it impossible for the area to be expanded to accommodate more streetcars.

Beaches-East York Councillor Brad Bradford has been made aware of the traffic issue, and said it will be monitored by TTC officials.

“I understand that this situation is currently being investigated by TTC, and staff were reminded to monitor the route to ensure that the Neville loop only has one streetcar at a time,” he said.

“I have been assured that TTC supervisors will continue to monitor the route, with special attention to this area, and they will make the necessary service adjustments to minimize the occurrence of this problem.”

Burke said he contacted TTC about the problem, requesting that they extend the parking on Queen Street East in order for the streetcars to pass without hassle.

Hayley Waldman, a communications advisor at TTC said, “We are working with area residents, the local councillor, and City of Toronto Transportations Services to come up with a proper solution.”

TTC is currently in the process of creating two parking slots in the area.

“We basically need about a hundred and fifteen metres which will be split up into two parking slots,” Burke explained. “They will be in two separate blocks west of the Neville loop.”