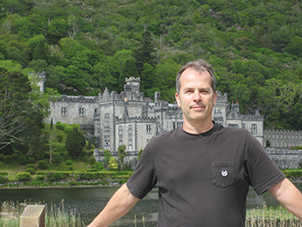 Rob Parkhill in this photo from a recent trip to Ireland. A memorial service for Parkhill, 58, who died after a men’s hockey game on Jan. 25 was held on Sunday, Feb. 3, at the Balmy Beach Club. Photo: Submitted.

A standing-room-only crowd that overflowed into adjacent rooms filled the Balmy Beach Club on Sunday to honour the memory of Rob Parkhill.

Parkhill, 58, died Friday, Jan. 25, from a heart attack shortly after he finished playing a game of over-50 hockey at an outdoor tournament held by Balmy Beach Club Hockey (BBCH) at the Kew Gardens rink.

Parkhill was an eight-year member of BBCH’s Greens team, but played in the Jan. 25 game as part of two teams joined together from the club’s six teams to play in the over-50 game which opened the annual John ‘Jocko’ Thompson Memorial Winter Classic Tournament.

At the Sunday, Feb. 3, memorial for Parkhill, his Greens number 14 hockey sweater was displayed along with family photos.

Family members and friends spoke of Parkhill’s kindness to others, his caring personality, generosity, positive attitude and his love of hockey.

The large number of people at the memorial was evidence of the kind of man Parkhill was, said his wife Lynn Walker.

“He made authentic connections with people he met. Going grocery shopping with Rob would always take twice as long as normal because he was always meeting someone he knew,” she said. “He had so many friends.”

She remembered first meeting him in 2007 when they were set up on a blind date by her friend Elizabeth Musmanno. “She said to me, ‘Don’t worry you don’t have to marry him.’”

However, Walker said it soon became apparent that she would. “His smile, his easygoing personality that put everyone at ease…within a few days it was obvious we were in love,” she said.

Walker said she and Parkhill were “immensely happy together” and so much of that had to with his positive, caring personality.

“He was always eager to help others and to do it without fanfare,” she said. “Just the week before, he said he was going to the blood donor clinic because he said he wanted to be a better person this year, though I don’t how that would be possible.”

Among the speakers at the memorial were Parkhill’s sister Ariel Barkley; his friend Jay Howell from his hometown of St. George, Ontario; his friend Clark Calwell, who had a cottage beside Parkhill on Big Gull Lake; Paul Goddard, who was his teammate on the Greens hockey team; Larry Titchner, a friend from the Hunt Club neighbourhood where Parkhill lived; his wife Lynn and stepdaughter Arielle Dillonsmith.

Along with sports, Parkhill was also a big music lover and his nephew Nick and wife Emily performed an emotional version of Leonard Cohen’s Hallelujah at the memorial.

Parkhill had a life-long passion for hockey, and joined the Balmy Beach Hockey Club eight years ago. Goddard was his teammate, and remembers Parkhill joining the Greens team as 51-year-old rookie.

“Rob had a gift of connecting with people and making them feel special,” said Goddard, and they soon developed a friendship beyond hockey as they lived relatively close together and would often walk home along Kingston Road after post-game drinks at The Green Dragon Pub.

“I can still hear his voice saying ‘Are you going to The Dragon tonight,’” said Goddard.
“I will treasure our walks home along Kingston Road and the good talks we had.”

Parkhill scored a hat trick in the game he played in on the night he died, and many who spoke at the memorial reflected on the fact that he was doing something he truly loved at the time.

The importance of doing what you love and caring for the people you love as her husband did, was a message Walker stressed to all who attended Sunday’s memorial.

“Strive to live with compassion for others, and to have no regrets,” she said. “Live for this time because there might not be another time. Play the game.”

Parkhill had a long business career and was Canadian Sales Manager for Toronto Gear Works.

As he lived in life, Parkhill’s generosity to others continued after his death as he made life-sustaining donations to the Trillium Gift of Life Network. Green ribbons promoting the importance of organ donation were handed out at Sunday’s memorial.

The family said donations in his memory can be made to the SickKids Foundation or the Canadian Tire Jumpstart charity.