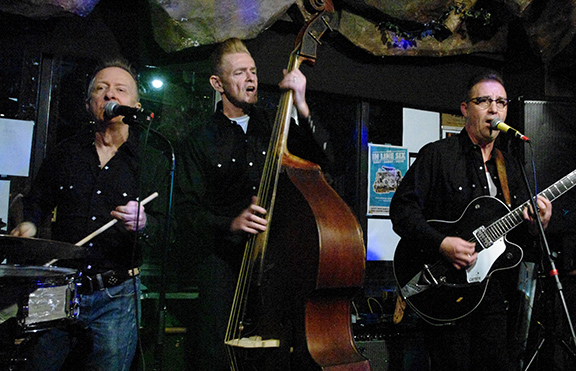 The In Line Six rockabilly trio will be playing their home turf, returning to Salty Dog Bar and Grill, on Sunday, Feb. 10.

Two members of the band are longtime east end residents.

Beach Hill resident Steve Good, leader and upright bassist, said, “I have lived in the east end all my life. I was born at East General (now Michael Garron) Hospital.”

Drummer and lead vocalist Teddy Fury has lived in the eastern end of Leslieville for more than two decades.

Although the trio disdains the term super group, they have founded and perform with other top Canadian rockabilly groups. Fury and Bartley co-founded The Royal Crowns. Good founded Greasemarks, who recorded their self-titled album in Los Angeles last spring. Both groups have toured Canada and the United States.

“Teddy and I love playing Toronto’s east end,” said Good, “because there is so much focus on the west end musically. We feel strongly that the east side needs to be represented more.”

The In Line Six packed Salty Dog in their world debut in November.

“Their full-out cool rockabilly tunes kept the crowd engaged. Glad to hear they have been rebooked.”