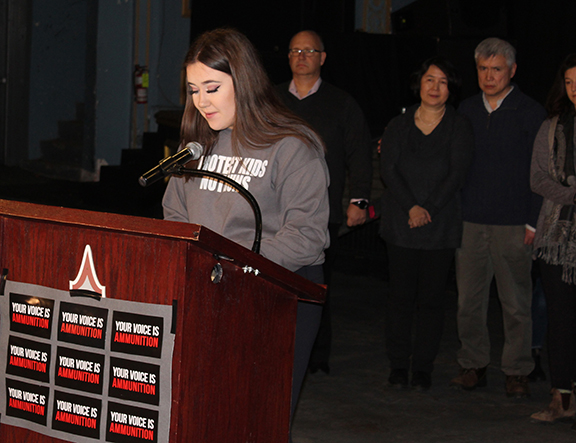 Quinn Fallon speaks about the death of her older sister Reese in the Danforth shooting, during a press conference held on Feb. 22. Photo by Alan Shackleton.

Family members of those impacted by the Danforth shooting last July made an emotional plea for the banning of the private ownership of handguns during a press conference held last Friday morning at the Danforth Music Hall.

The media conference was held seven months after the July 22 mass shooting on Danforth Avenue which took the lives of Beach resident and Malvern Collegiate grad Reese Fallon, 18, and Markham’s Julianna Kozis, 10, and injured 13 others.

A number of victims of the shooting and their family members were in attendance at the Feb. 22 press conference, though not all of them spoke.

Those that did called for the federal government to ban the private ownership of handguns and urged Canadians to sign an online petition calling for such a ban.

Reese Fallon’s 15-year-old sister Quinn gave a moving account of how the tragic events of July 22 have impacted both her family and the Kozis family.

“Each day is a new struggle, never accepting that this nightmare became a reality that evening on the Danforth or that our girls are gone,” said Quinn.

“Because Reese and Juliana don’t have a voice anymore we are doing this in their honour. No family should ever have to go through what my family and the Kozis’s do.

“Finding out your 18-year-old sister is lying dead on the Danforth while she was innocently minding her own business out for her best friend’s birthday dinner. Or rushing your 10-year-old child to SickKids with bullet wounds, and finding out she’s not going to make it even though she was supposed to be having a fun night with her family.”

Quinn called on all Canadians to go online and sign the petition calling for the ban on private ownership of handguns.

“I urge you to sign the petition on triggerchange.ca for Reese and Juliana and all the other innocent lives taken from us due to the senseless act of gun violence.”

Reese was out with a group of friends on the evening of July 22 celebrating the 18th birthday of her friend Noor Samiei and they were eating ice cream in a crowded Alexander the Great Parkette when a man began shooting.

Police flooded the area and briefly exchanged gunfire with shooter Faisal Hussain, who shortly afterwards turned his gun on himself and took his own life.

That gun, a .40 calibre handgun, was originally owned legally and stolen a number of years ago in Saskatchewan.

The reality of what are originally legally owned handguns ending up in the ends of those who should not have them, is one of the main motivators behind the triggerchange campaign.

Along with signing the petition, the families of the Danforth shooting also want Canadians to contact their political representatives at all levels of government and tell them that public safety should be their focus.

“This is not a referendum on firearms in general, but on handguns and assault rifles,” said Beach resident Ken Price, whose daughter Samantha was one of the girls at the birthday dinner and who was wounded in the shooting. “We want to send a message to our elected representatives. We want public safety to be your highest priority item.” At the press conference, Price was questioned on the logistics of how such a ban on private ownership of handguns would work and he said that doing nothing simply because it might be complicated was not acceptable.

“Unless this is an objective, nothing will happen. If public safety is the Number 1 priority, we will find a way to do it. We don’t accept doing nothing,” he said.

“The kind of gun used is a weapon designed to shoot at people and this is the kind of weapon that should be banned.”

Price pointed out there are now approximately one million handgun owners in Canada. “There is no good reason for that to be the case,” he said.

Noor Samiei read an open letter from the families and victims sent to Prime Minister Justin Trudeau calling for the handgun ban.

“Are we going to learn from our experience or are we going to express grief in the moment and move on? We are better than this as a nation,” the letter said. Noor said she and Reese would often talk about what their future lives would be like. “Reese and I had always talked about how our kids would get to know each other…it’s hard to understand she’s gone. I don’t think we will ever move on and really accept it.”

“If you knew Reese, you knew how amazing she was,” said Noor.

Also at Friday’s press conference was Patrick McLeod, a retired Toronto police officer whose daughter Skye was also out with the group of friends celebrating Noor’s birthday when the shooting took place.

He was clear in his opinion that a ban on private ownership of handguns was needed.

“It’s a myth in Canada to say to say the legal gun owners are not part of the problem, but they are,” he said.

McLeod also urged Canadians to demand action from government. “Call your representatives and tell them you don’t want handguns and assault rifles in Canada. It’s ridiculous.” Dzerowicz is sponsoring the petition and will be presenting it to the House of Commons in early March. The deadline to sign it is March 2 and it can be accessed at https://petitions.ourcommons.ca/en/Petition/Details?Petition=e-1923 and it is number E-1923 or at https://triggerchange.ca/

Also, Scarborough Southwest MP Bill Blair, who is Minister of Border Security and Organized Crime Reduction, is working on a report looking into Canada’s gun laws. He has held a number of hearings across the country to get input on the issue.

“Mr. Blair has listened and is assembling a report,” said Dzerowicz at Friday’s press conference.

Dzerowicz said that since there is a federal election in October of this year, there may not be time for changes to be passed before the government’s term ends but “there could be some immediate actions and recommendations.”

Erskine-Smith, who knew both Reese Fallon and Noor Samiei through their work with the Beaches-East York Liberal Association, said “absolutely there should be a ban on private ownership of such firearms.”

He said Reese was “an amazing young woman” and her death was an “enormous” loss.

While the election timeline makes getting a bill passed unlikely, Erskine-Smith said he expects “action” on a ban prior to the government dissolves. “I’m expecting a fully formed solution before we rise,” he said.

For more on Erskine-Smith’s position on dealing with gun violence, please see his In My Opinion column from the Sept. 18 edition of the Beach Metro News: