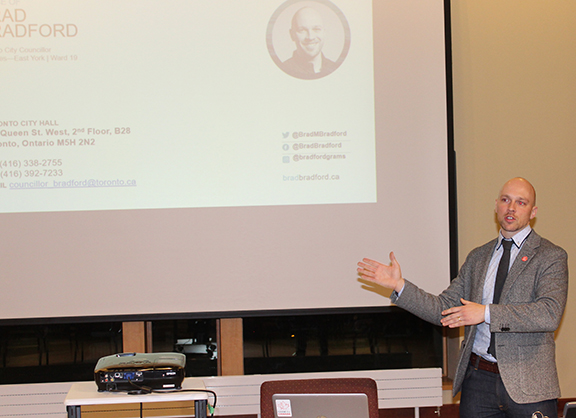 The state of Queen Street East in the Beach was a key topic of discussion at a community meeting hosted by Beaches-East York Councillor Brad Bradford on Tuesday, March 5.

The evening meeting was held at Beach United Church and attended by about 50 people.

Guest speakers at the meeting were Alexandra Vamos, manager of shelter planning and housing for the City of Toronto; Mike Major, manager of business improvement for the city; and Anna Sebert, Beach Village BIA co-ordinator.

Given that the meeting was held at a church located at Wineva Avenue and Queen Street East, it was not surprising that Sebert’s presentation generated a fair bit of discussion regarding vacant stores and challenges facing businesses in the area.

Sebert said the Beach Village BIA, which covers an area along Queen Street East from Neville Park Boulevard to Lockwood Road, is undertaking a number of initiatives to address some of those challenges.

“It’s to address empty storefronts and vacant businesses,” she said. “We are trying to understand what our businesses and landlords are facing.”

To that end, the BIA’s Master Plan for 2019 will focus on four areas, said Sebert. They are grants for events; parkettes at Lee and Hammersmith; a Business Recruitment Program and wayfinding for visitors to the area.

In particular, the BIA is aiming to make sure the many people who visit the lakeshore know that there are lots of stores and restaurants available to them on Queen Street East just north of the water.

The Beach Village BIA is also aiming to connect business people that are looking for space with those who have the spaces available, Sebert said.

An audience member pointed out that some stores on Queen Street East have been vacant for more than 20 years, and wondered how that could be and how it could be changed.

Both Sebert and Bradford said that a number of factors including landlords who are seeking very high rents and the way in which the properties are taxed play a role in that situation.

The example was given of a two-storey building on Queen Street East being assessed for its potential to be developed into a four-storey condo.

The idea of having Queen Street East in the Beach declared as a cultural or creative hub, which might make it eligible for a special status to reduce the rise in both assessed values and taxes to be paid, was suggested as a possible solution.

After the meeting, Bradford said he would support initiatives that help the area.

“Local businesses are the backbone of our community,” he said in a statement. “Since the election I’ve been working closely with local Business Improvement Areas (BIA’s) and city staff to look at everything from small beautification projects to the big policy actions to keep our main streets thriving.

“In 2017 the City of Toronto created a separate ‘creative hubs’ tax class for properties that house non-profits and other creative organizations. That class remains focussed on the non-profit sector, however I would be eager to support any initiative that can help Queen Street stay affordable for businesses and a centre our community.”

Vamos’ presentation at the meeting gave a broad outlook of homeless in the city, its causes and some ways to help. She acknowledged that the need for shelter for refugees is growing and the city is reaching capacity in many of its facilities.

“Refugees are often families and we don’t want children in shelters,” she responded to a question about refugees and homelessness. “We’re working on it, but it’s pretty complicated.”

She said about 22 per cent of those who are homeless in Toronto would be considered “chronic”.

The rest are people who have found themselves in situations where they can no longer afford housing. These people desperately need access to affordable housing, said Vamos.

Major pointed to the Leslieville area which has undergone a boom of late, especially with restaurants and brew ups opening up, but said variety along main street areas is crucial.
“I believe a successful main street has brew pubs and restaurants, but also has butchers and places to buy fruits and vegetables,” said Major. “We don’t want our main streets to be just bars.”

Reaching that ideal is not always easy, though.

Having a local BIA, however, is a key way for main street areas to start promoting themselves and working towards creating appealing areas for shoppers and small businesses, and the city strongly encourages them, Major said.

“We believe the BIA model is best for revitalizing main streets,” he said.

However, along with rents and streetscape challenges, main street businesses face huge competition from big box retailers who provide lots of free parking for customers and from online retailers.