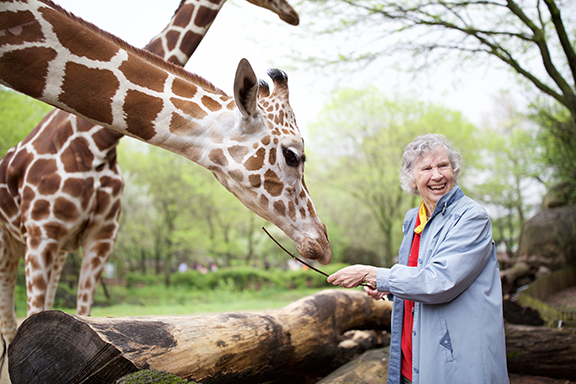 Dr. Anne Innis Dagg is the subject of the documentary The Woman Who Loves Giraffes by local resident Alison Reid. Insert photo shows Alex and Tyler MIfflin, The Water Brothers.

We Beachers love our dogs and cats, but does living close to a Great Lake and wooded ravines give us a special appreciation of nature?

It is amazing that so many local naturalists, artists, authors and filmmakers have been influenced by the natural world around us and have devoted their lives to protecting our environment and wildlife.

Throughout our short history Beach residents have rallied against a railroad, expressways, jets, big condos, industrialization, pollution and environmental hazards. During the recent Earth Week families gathered at Glen Stewart Ravine to plant trees, clean up trash and learn about bees and butterflies.

When our Beaches-East York MP Nathaniel Erskine-Smith recently presented a showing of the wonderful documentary, The Woman Who Loves Giraffes, at the Fox, the demand was so great that a second screening was added.

Dr. Anne Innis Dagg herself was on hand for a Q & A along with producer and director Alison Reid, an East End resident.

Years before Jane Goodall and Diane Fossey, Dagg was the first scientist to travel to Africa to study animal behaviour in the wild in 1956. Her book became the “bible” for research on giraffes. Like many other animals, the population of this beautiful creature is dwindling to the point it is becoming an endangered species.

Reid felt that, “Anne’s story spoke to me”. Her film shows Dagg returning to South Africa decades after facing so many obstacles in the academic world because of gender discrimination.

Documentaries are a good way to help us understand our complicated natural world. Canadians have led the way in documentary filmmaking as well as in environmental research, especially in the migration of birds and butterflies.

Gene Domagala wrote a fine article recently in Beach Metro News on the Winter Stations at Woodbine Beach and the 40-year long search by Dr. Fred Urquhart (1911-2002) and his wife Norah (1918-2009) to find the winter grounds of the monarch butterfly in Mexico.

Flight of the Butterflies is an IMAX film about this amazing discovery with Gordon Pinsent playing the adult Urquhart.

We see a young Fred at Scarborough Bluffs. Urquhart grew up at the foot of Woodbine Avenue right down by the lake and was fascinated by the insects and birds in the marshes and ponds of the day.

The famed director Norman Jewison (1926- ) lived nearby above his parents’ store at Queen and Kenilworth and would take his cedar-strip canoe down to the water.

Another renowned Canadian whose youth was influenced by our natural habitats was author and environmental activist Farley Mowat (1921- 2014).

Ashbridges Bay was once a huge, swampy marsh teeming with wildlife. Mowat told writer Greg Gatenby about his student days: “I spent most of my time down at Ashbridges Bay walking around in the sewage looking at birds…I hate cities! However, I have to give Toronto credit for having encouraged my connection with the natural world at a critical time in my life.”

Mowat went on to write best-selling books, including a few which have been adapted into movies such as Never Cry Wolf (1983) and A Whale for the Killing (1981).

Author Fred Bodsworth (1918-2012) of Beech Avenue had a lifelong passion and curiosity for birds. He is best remembered for his fine 1955 novel The Last of the Curlews which was made into an ABC-TV special showing the long, sad migration of a bird that is now extinct.

The animated film won an Emmy for Children’s Programming for its cautionary tale about man’s careless destruction of the natural world.

It’s not just naturalists who have felt the pull of nature. Bodsworth’s neighbour on Balsam Avenue was landscape painter William Kurelek (1927-1977) whose art included scenes at the beach and in nearby Glen Stewart Ravine.

Just down the street on Balsam lived artist Doris McCarthy (1910-2010) before she moved to the home her mother dubbed Fool’s Paradise overlooking the rugged beauty of the Scarborough Bluffs.

Classical musician Glenn Gould (1932-1982) drew inspiration from his many walks on the Boardwalk when he lived on Southwood Drive. His favourite place in the Beach was down by the water’s edge.

A new generation of Beachers is carrying on the work of naturalists. Alex and Tyler Mifflin grew up in Balmy Beach and worked on Flight of the Butterflies. You may have seen their eco-adventure series, The Water Brothers, on TVO.

Our wild friends really are the “canary in the coal mine” warning us of danger. This fragile planet is the only habitat we have. When future generations ask what we did to protect our environment, what will our answer be?