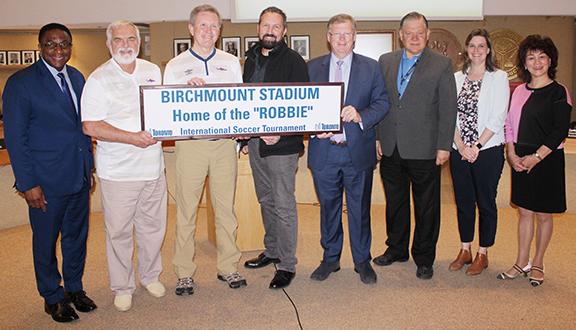 Immortalized in song and a Scarborough icon for decades, the ‘Birchmount Stadium Home of the Robbie’ sign is back in place at the sports facility located in southwest Scarborough.

A ceremony held at Scarborough Community Council on the morning of Wednesday, May 22, celebrated the return of the sign of after an absence of a number of years.

The sign had been on the exterior wall above the south entrance to the stadium for years, recognizing that Birchmount was the home of the championship games of The Robbie International Soccer Tournament which has been taking place in Scarborough since 1967.

The original sign was removed during stadium renovations a number of years ago, and had not been replaced until this month.

Entering its 53rd year this June and July, The Robbie is the world’s largest youth soccer tournament for charity. Since its inception, the tournament has raised funds for Cystic Fibrosis Canada.

The tournament is named after Robbie Wimbs, who had cystic fibrosis and was the inspiration for holding the first tourney back in 1967 which featured eight teams and raised just over $47. In the decades since, The Robbie has raised almost $2 million for CF Canada.

More than 400 boys and girls soccer teams are expected to take part in this year’s Robbie Festival (for teams ages seven to 12 on June 22 and 23) and the Robbie Tournament (for teams ages 13 to 18 on June 29, 30 and July 1). Championship games will take place at Birchmount Stadium on July 1.

At Wednesday’s ceremony, Scarborough Southwest Councillor Gary Crawford said the tournament, which is run by volunteers, is an example what can be “achieved by kind hearts and hard work.”

“The tournament has also been immortalized in the Barenaked Ladies song One Week with the line ‘Birchmount Stadium Home of the Robbie,” he said.

Mike Ellis, chair of the Robbie International Soccer Tournament, said the return of the sign to the stadium is good news for both the tourney, local soccer and Scarborough as whole.

“This means a lot to The Robbie and soccer,” he said. “We are an important Scarborough tradition and a part of the history of the community. We’re very pleased to see the return of the sign.” A ceremony is tentatively planned for later this month to officially unveil the sign at Birchmount Stadium, and it is hoped some members of the Barenaked Ladies will be able to attend.

In a tweet last year, the band said on its Twitter account that the line “Birchmount Stadium Home of the Robbie” was its favourite Canadian reference in all of its songs – posting a photo of the original sign at the stadium entrance.