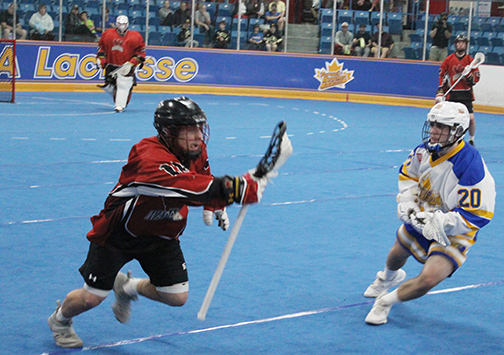 The Toronto Beaches Junior A Lacrosse team had a big and loud crowd out for their home opener played Thursday, May 23, night at Ted Reeve Arena against the Whitby Warriors.

The game was an entertaining tilt that ended with a 11-7 win for visiting Whitby.

Taggert Clark was the hot shooter for Toronto Beaches as he notched a hat trick. Other Toronto goals went to Corson Kealey, with a pair, Brady Kearnan and Justin Martin.

The Toronto Beaches team plays in the Ontario Junior A Lacrosse League (OJALL), and are sporting a 1-2 record in their first three games of the season.

Toronto’s first game was in Kitchener-Waterloo on May 16, and the Beaches boys came home with a 10-5 win.

In their second game on May 21, the Toronto Beaches played in Whitby lost 11-6.

The next home game for Toronto Beaches is Sunday, May 26, against Barrie. Start time for the game is 7 p.m. at Ted Reeve Arena, 175 Main St. at Gerrard Street.

There are 12 teams in the OJALL loop this year, and they will all be competing for a chance to win the coveted Minto Cup which is awarded to the Canadian Junior A lacrosse champs.

Last season, the Toronto Beaches team made it to the semifinals of the Ontario league before being defeated by the Brampton Excelsiors.

The Toronto Beaches team was founded in 1991.

The schedule of remaining home games for the Toronto Beaches Junior A Lacrosse team, which plays at Ted Reeve Arena, is as follows: