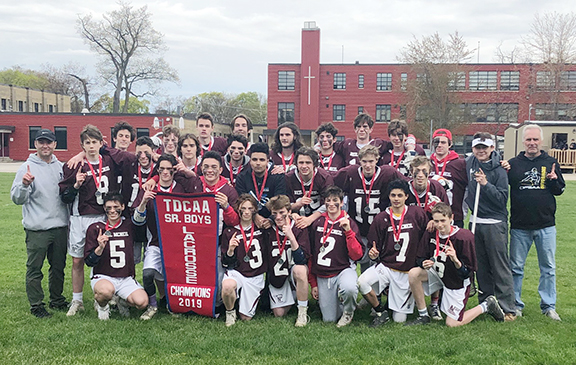 During the season, the Neil McNeil boys outscored their opponents 238-37.

They will be now be taking part in the Ontario Federation of School Athletic Association (OFSAA) boys A/AA rugby championships June 6 to 8 in Brooklin.

The team is coached by Nicole Ross and community coach Iain McLeish, who is a rugby coach at the University of Toronto and the Balmy Beach Club.

Ross said a number of the Neil McNeil team members also play rugby at Balmy Beach, which helped the team put in such a strong showing this season. That win qualified them for the OFSAA lacrosse championships taking place in Owen Sound on June 5 and 6.

Wrapping up the successful week was the track and field team which made history by winning its first ever TDCAA championship.

Since the 1980s, the Neil McNeil team were perennial second place finishers, and they have been a strong challenger to Chaminade’s impressive program.

This year, however, Neil McNeil took the top prize.

Under the guidance of head coach Jason Wood and assistant coaches Abigael Layton, Ashley Masterson, Steve Masterson and Arnold Lopez, Neil McNeil began developing a wider array of events to compete in and to have more athletes involved in track and field.

That paid off this year with Neil McNeil taking the Midget Boys Title, the Senior Boys Title and the Overall Team Title.

Individually, Neil McNeil runner Liam McCullagh was named Outstanding Male Midget Athlete of the Meet for his victories in the 800, 1,500, and 3,000- metre races.