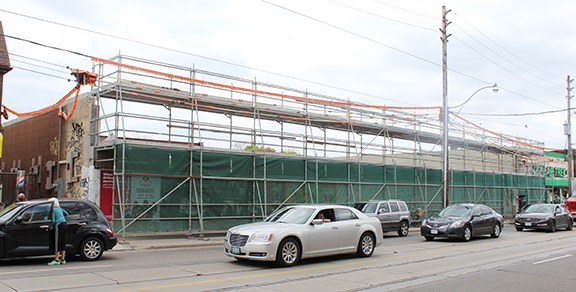 Loblaw Companies says it is hoping to have a new Rocca's No Frills open and operating on Coxwell Avenue by the end of 2019. Last week, construction work appeared to be progressing on the site. Photo by Alan Shackleton. Inset photo shows a rendering of what the new store is expected to look like.

Construction work is underway at the site of the demolished Rocca’s No Frills grocery store on Coxwell Avenue, and there are hopes that a new store will be open and operating at the location by the end of this year.

“We continue to work hard to complete the renovation of Rocca’s No Frills,” said Karen Gumbs, director of public relations for Loblaw Companies, which is the parent company of No Frills, in a statement sent to Beach Metro News.

“While the renovation has taken longer than originally planned, we are happy with the progress we are making. Our hope is to have the store open and servicing the community again before the end of the year.”

Area residents can be forgiven, however, if they don’t hold their breaths as there have been a number of delays in work on the site and the opening date has been pushed back from what had been hoped to be fall of 2018.

Back in February of last year, Loblaw had said it was hoping to have the store at 269 Coxwell Ave. up and running by the fall of that year.

The store closed suddenly in May of 2016 leaving many area residents who depended on it in the lurch. To take care of those customers, Loblaw has been running a shuttle from the Rocca No Frills parking lot to Dave & Charlotte’s No Frills on Carlaw Avenue since the closure.

Rocca’s No Frills announced on May 11 of 2016 that it was closing immediately. At first there was mystery about why the abrupt closure took place, but it was revealed that building was in need of urgent repairs.

Since then, the majority of the old store has been demolished and new footings, foundation, basement and some wall work has been completed. A rendering of the vision for the site was released by Loblaw in 2017, and that image is believed to still be accurate.