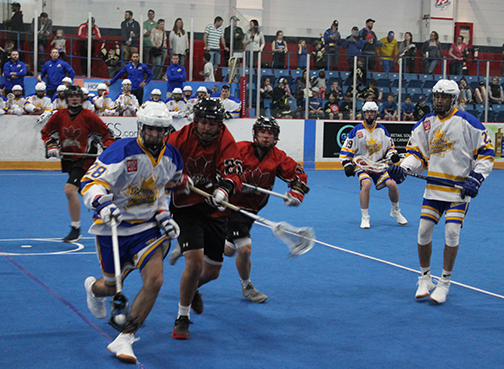 The Toronto Beaches Junior A Lacrosse team will be looking to boost its season record to above .500 when they host Peterborough tonight (Thursday, May 30) at Ted Reeve Arena.

With an 11-5 home win against Barrie on Sunday,  May 26, night, Toronto Beaches upped its record to 2-2 on the season.

The squad’s home opener was held on May 23 before a big and enthusiastic crowd, but Toronto fell 11-7 to visiting Whitby.

In the May 26 game, Toronto Beaches got hat tricks from Corson Kealey and Brady Kearnan. Other Toronto goals were scored by Charlie Kitchen, with a pair, Taggert Clark, Josh Fairey and Jakson Raposo.

Toronto’s first game of the season was in Kitchener-Waterloo on May 16, and the Beaches boys came home with a 10-5 win.

In their second game on May 21, Toronto Beaches played in Whitby and lost 11-6.

There are 12 teams in the OJALL loop this year, and they will all be competing for a chance to win the coveted Minto Cup which is awarded to the Canadian Junior A lacrosse champs. Players in the OJALL range in age from 16 to 21.

The schedule of remaining home games for the Toronto Beaches Junior A Lacrosse team, which plays at Ted Reeve Arena, is as follows: