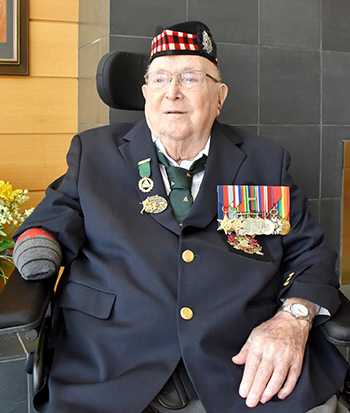 Allan Bacon, who grew up in East Toronto and attended Danforth Tech, landed on Juno Beach on D-Day; 75 years ago today. Photo: Submitted.

On June 6, 1944, I arrived by boat on Juno Beach in Normandy, France, with the Canadian Scottish Regiment.

My role was in the mortar platoon. On June 17, I was based in a barn, anticipating an attack that never came. I went into a nearby shed to disarm the grenades when one exploded, resulting in the loss of my right arm.

When I returned to Canada, I became a member of The War Amps, which was started by amputee veterans returning from the First World War to help each other adapt to their new reality as amputees.

Through the years, we have made it a goal to remember and commemorate our fallen comrades, and to educate youth about the horrors of war.

In Normandy, many Canadians died or suffered wounds that they had to carry with them for the rest of their lives.

As we mark the 75th anniversary of D-Day, it’s important that we never forget the sacrifices that were made.