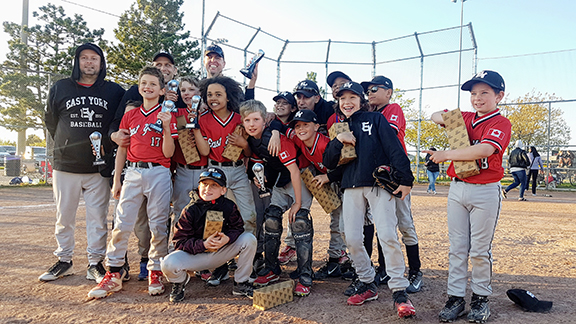 The East York Baseball Association's Minor Mosquito AA team celebrates its championship at the Bolton Tournament on the weekend of June 1. Photo: Submitted.

The East York Baseball Association had a successful showing at a pair of tournaments last weekend.

The Minor Mosquito (Under-10) AA team won the championship at the Bolton Tournament on June 1 and 2.

On the same weekend, the Major Mosquito (Under-11) AAA team won the title at the Oshawa Tournament.

In Bolton, the East York squad went a perfect 6-0 to take top honours in the 16-team tournament.

However, it was not an easy road despite the perfect record as East York had to play two games that went into extra innings (including a thrilling 11-inning contest in the championship game) to take the title.

In Oshawa, the Major Mosquitos also chalked up a perfect record over the weekend as they went 5-0.

East York topped a strong team from Whitby to take the championship game.