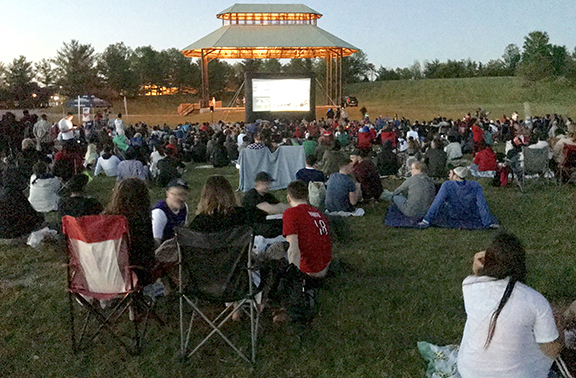 The Toronto Raptors could be crowned NBA champions tonight, and local residents are invited to watch the game together at Jurassic Beach in Woodbine Park.

The Monday, June 10, Game 5 between the Raptors and the Golden State Warriors tips off at 9 p.m., and Jurassic Beach will be open for fans to watch the game on a giant inflatable TV screen starting at 8:30 p.m. The Raptors lead the best-of-seven series 3-1 and a win tonight would give the NBA Championship to Toronto.

Jurassic Beach made its debut at Woodbine Park for last Friday’s Game 4, which saw the Raptors win 105-92 and put themselves one victory away from the championship.

It was organized by Beaches-East York Councillor Brad Bradford, along with support from The Beach Village BIA and The Richards Group.

Last Friday night’s warm and dry weather brought out a big but not huge crowd to Jurassic Beach for Game 4.

Weather conditions could be a bit rougher tonight, as it’s been raining on and off during the day and is expected to continue to do so into the early evening. Those attending are reminded to be prepared for the weather and might want to wear rubber boots as the ground in front of the viewing area could be quite wet.

Jurassic Parks have popped up all over the country and around world as people gather together to watch what has been an historic run for the Raptors in this year in the NBA playoffs.

Fans started lining up to get into the Jurassic Park downtown outside the Scotiabank Place for tonight’s game before Friday’s game was even over.

Bradford said Jurassic Beach promotes a family-friendly atmosphere for what could prove to an historic game in Toronto sports history tonight, and alcohol is not permitted in Woodbine Park for the event,