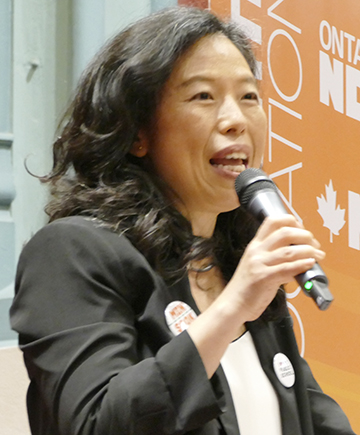 Min Sook Lee has been named as the NDP’s candidate for Toronto-Danforth in this fall’s federal election.

An award-winning filmmaker, professor of art and social change at the Ontario College of Art and Design, and a community organizer, Lee has lived in the Greenwood and Gerrard area for the past 12 years with her two children and her partner.

She said she is honoured to be running for the NDP in Toronto-Danforth, which is the former riding of the late Jack Layton who led the federal party from 2003 until his death in 2011.

“I respected and admired him for years,” Lee said of Layton and his wife Olivia Chow, who served as a Toronto councillor and as the MP for Trinity-Spadina.

“They were the best of what politicians in government should be. To be representing the NDP in his riding is a deep honour.”

While teaching at Ryerson University in 2014, Lee made a short documentary film about Layton titled Jack Layton: The Inspirational Educator at RU.

Lee’s family came to Canada from Korea in 1973 and she grew up in the Kensington Market area. Her family ran a variety store near Bloor Street and Ossington Avenue and she would work long hours in the store while growing up.

She said that experience gave her a strong commitment to social justice issues as she saw how hard her parents, and all members of her family, had to work and how they were sometimes treated unfairly. It also gave her insights into how people can abuse power, and that has been something she always been committed to fighting against.

“I understood from a very early age to hate the abuse of power,” Lee said. “As soon as I could, I started organizing with others to create equity.”

She was involved with a youth group against apartheid which led her to make connections with other activists across the city, and set her on a path of fighting for social justice and equality.

Those principles are what inspired her to seek the candidacy for the NDP in Toronto-Danforth for October’s federal election.

Lee has a number of national and local issues which she said are her priorities for the coming campaign.

Addressing climate change, and the impacts it has both globally and locally, is one of her key issues, said Lee.

Also of importance is dealing with economic equity so all Canadians have a chance to improve their lives, a national pharmacare program, child care programs, improved public transit systems, and the protection and expansion of affordable housing.

On the transit file, which links to climate change action, Lee said the federal government needs to recognize its role in supporting public transit with increased funding and supports for municipalities.

The widening gap between the wealthy and the poor and the impact it is having on Toronto’s neighbourhoods needs federal help to be addressed, she said.

“We need to recognize the disparity of the city, and we need programs to protect people and jobs that pay them fairly or we are looking at a dismal future,” she said.

Lee will be taking on Liberal incumbent Julie Dabrusin in this fall’s federal election. Also registered to run so far in the riding is Zia Choudhary for the Conservatives; and Chris Tolley for The Green Party.

EDITOR’S NOTE: This story has been updated from it’s original posting to include links to Beach Metro News profiles on other candidates running in the federal election in the Toronto-Danforth riding and an updated link to Min Sook Lee’s website.