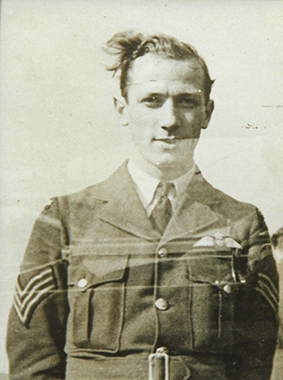 Information is being sought on Alexander Aitken of Wolverleigh Boulevard, an RCAF pilot who died in a mid-air collision during the Second World War. Inset photo shows his cemetery stone in Wales which was recently changed to reflect the fact he was a pilot. Photos: Submitted.

A former member of the Royal Air Force who lives in Wales is hoping Beach Metro News readers can help him find more information on a Canadian pilot who was killed in a mid-air collision during the Second World War.

Steve Jones, from Port Talbot, Wales, has done extensive research into the graves of numerous airmen who lost their lives in the Second World War.

He was able to gather some information on Alexander Aitken, who grew up on Wolverleigh Boulevard which runs just north of Danforth Avenue between Woodbine Avenue and Linsmore Crescent. Aitken is believed to have grown up in a house on the block between Linsmore and Monarch Park Avenue.

Jones was briefly in Toronto last fall while on a North American motorcycle tour. At that time, he tried to visit the house where he believed Aitken had grown up to see if he could get information on other relatives. However, he was not successful at that address, but did receive assistance from a neighbour who has forwarded Jones’ request to Beach Metro News.

Aitken died in January of 1943 at the age of 20 after an accident in which the plane he was in collided with another plane from his own squadron.

The following is a letter from Jones, seeking more info on Alexander Aitken and providing what information he does know about the family:

“In a quiet corner of a remote Welsh churchyard lies the grave of a Toronto airman.

In January of 1943 this young man’s life was ended in a tragic flying accident; a mid-air collision with a fellow squadron pilot.

For many years, his white Portland headstone erroneously recorded his occupation as “Navigator Bomber”. He was actually a Spitfire pilot with 421 Squadron RCAF.

Recently made aware of this error by myself, the Commonwealth War Graves Commission replaced his headstone recording his correct occupation.

To further my research into Alex Aitken, I would be grateful if any of your older readers who may remember his family can get in touch with me.

His parents were Alexander Drummond Aitken and Margaret Aitken (nee Craig). I believe he had two brothers; Ronald and Jack. While living in the area, the family attended the United Church on Rhodes Avenue.

Many thanks for anticipated help.”

It is also known, that Aitken was born in 1922 and that he worked at the T. Eaton Company’s mail order department prior to joining the air force.

Anyone with information on Alexander Aitken or his family is asked to contact Jones by email at steven.jones375@ntlworld.com or by mail at 4 Taicanol. Cwmafan. Port Talbot. South Wales. UK.